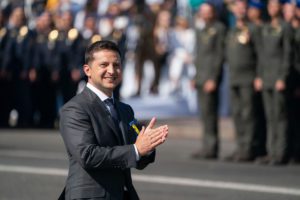 Some 70% of Ukrainians polled positively assess the activity of Ukrainian President Volodymyr Zelensky, while 9% take the opposite view, according to the results of a survey conducted by the sociological service of the Kyiv-based Razumkov Center on September 6-11, 2019.

The activities of the new Cabinet of Ministers are positively assessed by 45%, with 8% taking the opposite view, and the newly elected Verkhovna Rada some 44% and 10% respectively.

Some 57% of respondents believe that events in Ukraine are developing in the right direction, while 17% hold the opposite view. Some 41% of respondents are of the opinion that Ukraine is able to overcome existing problems and difficulties over the next few years, while 40% said the country can overcome them in the longer term. Only 6% said Ukraine is not able to overcome them. Some 62% of respondents believe that the activities of the new government will lead to an improvement in the situation in the country, while 7% said the opposite. Some 15% said it will not significantly change the situation in the country.

The study interviewed 2,018 respondents aged 18 and over in all regions of Ukraine, with the exception of Russia-occupied Crimea and Russia-occupied areas of Donetsk and Luhansk regions in a sample representing the adult population of the country by main socio-demographic indicators. The survey was constructed as a multi-stage sample, random with quota selection of respondents at the last stage. The theoretical sampling error (excluding the design effect) does not exceed 2.3% with a probability of 0.95.