SBU: MEDVEDCHUK SPOKE ABOUT POROSHENKO’S ACTIONS IN PURCHASING COAL FROM LNR / DNR AND TAKING OVER THE OIL PIPELINE 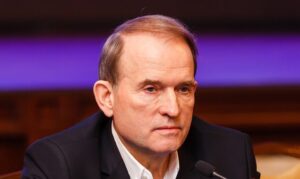 Detained MP Viktor Medvedchuk said that he was dealing with the withdrawal from the state ownership of the Samara-Western direction oil pipeline at the request of then-President Petro Poroshenko, coal supplies from LPR / DPR. Of Ukraine.
A statement issued by the SBU on Monday in the agency’s Telegram Channel notes that Medvedchuk, who is suspected of treason and aiding terrorism, told about the scheme of withdrawal from state ownership of the Samara-West direction main oil pipeline for further pumping. him diesel fuel.
“Describing the essence of the scheme, Medvedchuk detailed the role of former President Petro Poroshenko in it. Namely, that he not only asked Medvedchuk to contact the Russian leadership, but also ensured the necessary decisions in all Ukrainian instances,” the statement said.
Referring to Medvedchuk’s words, the Ukrainian secret service reports: “For this pipeline to become private property, and in fact – the property of Poroshenko himself, it was necessary to perform a number of actions… Courts, prosecutors, Antimonopoly Committee, State Property Fund – all of them made decisions personal interests of President Poroshenko “.
Thus, as noted in the SBU, Medvedchuk claims that he dealt with the pipeline at the request of Poroshenko.
“Finally, during the year of operation, the pipeline earned twice as much money for its owners as was invested in its purchase – up to $ 42 million. in the message.
In addition, according to the SBU, Medvedchuk told the details of the agreement in 2014-2015. mechanism for purchasing coal for the needs of Ukraine’s energy sector in the temporarily occupied territories of the so-called “L / DNR”. “In fact, the entire top of the state apparatus was involved, starting with the president and ending with ministers, law enforcement officers and those who directly implemented this scheme,” the SBU said, citing Medvedchuk.
The report states that the suspect named specific names of high-ranking officials involved in harming the interests of the state – former officials, former leadership of the National Bank, MPs and law enforcement officials.
“The security service continues investigative actions with the detainee to establish all the facts, circumstances, organizers and participants in the crimes committed,” the statement said.
The SBU reminds that the Ukrainian special services detained Medvedchuk in April after escaping from house arrest at the beginning of a full-scale Russian invasion on February 24.
In 2021, the SBU raised several suspicions against Medvedchuk. He is suspected of treason, aiding a terrorist organization and attempting to plunder national resources in the temporarily occupied territory of Crimea.
One of the cases concerns the organization of illegal coal supply schemes from the temporarily occupied territories. Fuel was purchased for cash, and thus pro-Russian terrorists financed a total of more than UAH 200 million.
Another criminal case concerns the illegal seizure of Prykarpatzapadtrans LLC by a section of the state oil pipeline worth over UAH 200 million. In February 2021, the National Security and Defense Council returned the pipeline to state ownership.