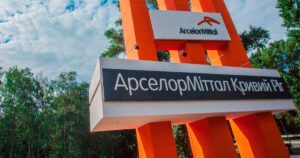 PJSC ArcelorMittal Kryvyi Rih (Dnipropetrovsk region) is gradually restoring production after a forced shutdown in March this year.
According to the company, during the visit to the enterprise, head of Dnipropetrovsk regional military administration Valentyn Reznichenko, chairman of Dnipropetrovsk regional council Mykola Lukashuk and head of Kryvy Rih military administration Oleksandr Vilkul discussed the restart of metallurgical production.
At the same time, it was stated that one blast furnace, two coke oven batteries, three pouring machines, a rolling mill, a converter and one of the three continuous casting machines are currently operating at the enterprise.
“One of the largest mining and metallurgical plants, ArcelorMittal Kryvyi Rih, resumes work. It is still a long way before the launch of all capacities, but the company has embarked on this path. The company is building new logistics and looking for new sales markets. Thousands of employees of the plant have a salary, and the budget – taxes,” the head of Dnipropetrovsk regional military administration said.
Vilkul, in turn, stated that important production facilities had resumed work in the industrial sector over the past two weeks.
Serhiy Lavrynenko, Deputy General Director for Metallurgical Production at ArcelorMittal Kryvyi Rih, added that thanks to the support of the parent company ArcelorMittal, the government of Ukraine, Ukrzaliznytsia managed to restore part of the production operations at ArcelorMittal Kryvyi Rih.
“We are optimistic… We hope to arrange coal supplies in sufficient quantities to restart another blast furnace in the near future, and then increase the level of rolled products production,” Lavrynenko said.
At the same time, it is recalled that in early March, the company’s management decided to stop all blast furnaces of the enterprise and the processes of metallurgical production. The coking plant is now in a state of hot downtime – this is a necessary measure to avoid causing irreparable damage to the equipment. The work of the mining department did not stop after the Russian invasion, although the level of ore production was reduced due to interruptions in the operation of logistics routes and the shutdown of blast furnaces, the company said.
However, since April, the plant has been gradually resuming production processes. The restart began with the return to operation of blast furnace No. 6, it resumed operation on April 9.