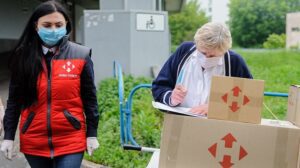 Nova Poshta joined the UN World Food Programme (WFP), as part of cooperation, the company receives food from European countries, forms food packages from them and delivers them to settlements according to the UN vision, primarily to Ukraine’s hot spots.
As the Nova Poshta press service reported on Wednesday, the company provided its production facilities in western Ukraine for the needs of the UNHCR and the UN Refugee Agency.
It is noted that the UN is compiling a list of priority cities and towns, focusing on the places of hostilities and regions that are threatened with a humanitarian catastrophe.
As of the beginning of April (in one week of cooperation), Nova Poshta prepared and delivered about 25,000 food packages to Chernihiv, Dnipropetrovsk and Donetsk regions.
In addition, the company transported more than 420 tonnes of household goods from the UNHCR to the IDPs.
Until the end of this month, Nova Poshta plans to deliver about 300,000 more sets to Kharkiv and Dnipropetrovsk regions.
“According to statistics, more than 10 million of our citizens have already been forced to leave their homes, hundreds of thousands still remain in dangerous cities and in conditions close to a humanitarian catastrophe, and we cannot stand aside. Even at the beginning of the war, we began transporting humanitarian aid across country and from abroad. We are now joining the UN programme. We are doing everything possible to make life at least a little easier for the Ukrainians most affected by the war,” Oleksandr Bulba, CEO of Nova Poshta, is quoted as saying.
In the nearest plans of the company – to start cooperation with other international organizations to provide Ukrainians with universal assistance.