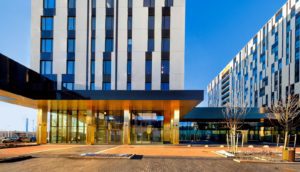 Over 70,000 square meters of retail space in trade and entertainment centers in Kyiv and regional centers were leased in 2019 with the participation of UTG consulting company (Kyiv) as a broker, the press service of the company has said. “During the company’s activity and as of the end of 2019 about 4.7 million square meters of space have been leased in various shopping centers in Kyiv and regional centers of Ukraine, of which more than 70,000 square meters this year,” the company said.
As reported, in 2018 space commissioned with the participation of UTG amounted to 72,000 square meters, and in 2017 some 54,000 square meters.
In particular, in 2019 with the assistance of UTG, agreements were signed with Leroy Merlin Ukraine and Multiplex cinema in the Odesa shopping center Riviera.
In addition, the new Kyiv shopping centers Smart Plaza Obolon, Cherry Mall, and others were launched with a 100% occupancy rate.
UTG (Kyiv) was established in 2001. It specializes in consulting commercial and residential real estate, brokerage of retail premises and comprehensive support of development projects.

Activity of international and Ukrainian retailers has revived attention of developers to building retail real estate in all large cities of Ukraine, UTG consulting company (Kyiv) has told Interfax-Ukraine. “The decline in consumer confidence in Europe, the rapid development of online commerce, the high level of competition in the clothing and footwear segment, the growth of staff salaries led to a decrease in profit margins and a pile of inventory at the largest European retailers, forced them to look for new markets, stimulated exit and the opening of stores in markets of countries not previously covered,” Head of Strategic Consulting at UTG Kostiantyn Oliynyk said.
So, after many years of negotiations, the leading international retailers presented earlier in the country began to return to the national market of Ukraine: H&M, Decathlon, Koton, Defacto, Polo Ralph Lauren, Kilian, AllSaints, PennyBlack, Tru Trussardi, Laurel, XTI, Santoni, Jo Malone, Daniel Hechter and others.
According to him, by the end of 2019, at the various stages of implementation (construction, preparatory work, concept) in Kyiv and the nearest suburbs there are 44 projects with a total rental area of 1.46 million square meters, in Odesa – 15 projects with a total rental area of 419,400 square meters, in the Dnipro – more than 100,000 square meters, in Kharkiv – more than 124,000 square meters, in Lviv – more than 80,000 square meters.
At the same time, the purchasing power and potential of retail space is limited by the size of salaries (in Kyiv – UAH 16,249; in Odesa – UAH 9,473; in Kharkiv – UAH 9,453, in Lviv – UAH 9,729), the pace of their growth, and the size of consumer expenses (in Kyiv – 62.2% of total family income; in Odesa – 67.6%; in Kharkiv – 62.9%, in Lviv – 71.80%) and the growth of the cost of housing and utility services, maintenance/rental of housing, travel, transportation, communication, education, medicine, as well as the level of inflation and the exchange rate of the national currency.
In addition, the success and functioning of retail real estate is significantly influenced by the volume and structure of the existing supply. So, in Kyiv there are five regional, 27 district, 24 micro-district, 19 specialized and 32 separate hypermarkets with a total area of just over 1.6 million square meters. The current offer of Odesa is 449,100 square meters, Kharkiv – 503,400 square meters, and Lviv – 399,100 square meters.
At the same time, the retail real estate offer is constantly increasing. In 2019 alone, the Smart Plaza Obolon micro district shopping centers (GLA is 11,800 square meters) and the Oasis shopping center (GLA is 7,800 square meters) were opened in Kyiv, and the regional River Mall (GLA is 62,200 square meters) and Blockbuster Mall (GLA is 135,000 square meters), the Araks specialized center in Khodosivka (GLA is 10,000 square meters) and street retail located at 2, Kyrpy Street (GLA is 2,500 square meters).
In addition, on December 7, the Karavan Outlet updated shopping center (GLA is 45,300 square meters) was announced for opening after restyling and reconstruction.
“As a result, in the case of the implementation and commissioning of all declared large-scale projects in local markets, a surplus of retail space may occur, which will entail a redistribution of consumer flows between facilities, an increase in vacancy and a correction in rental rates downward, especially in obsolete facilities with serious conceptual flaws,” Oliynyk said.
In his opinion, the approach of saturation and changes in the market are already becoming noticeable, and some developers have begun comprehensive modernization, redevelopment, specialization, or restyling of their retail facilities. For example, such facilities as Karavan, Metrograd, Silver Breeze, InSilver, Lukianivka Kvadrat, Gorodok, Magellan, Marmalade, Dream Town and Sirius started the update. In addition, Oliynyk said that a number of owners of the malls plan large-scale changes in the near future. 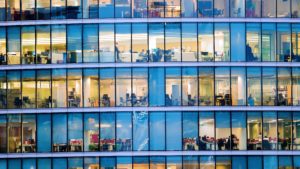 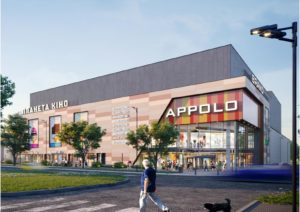 UTG consulting company (Kyiv) has signed an exclusive brokerage contract for the second line of the Appolo shopping mall in Dnipro. “Currently, UTG is looking for tenants for the second line of Appolo. The second line of the mall, located on the 36, Titova Street includes three levels with a total area of 40,000 square meters, 30,000 square meters of which are for leasing. The launch is planned in Q3 2019,” UTG said.
According to the concept developed by the company’s specialists, the facility will store a food supermarket with an area of 4,400 square meters, a cinema of 3,000 square meters, operators of goods for children, a fashion gallery, a large area of restaurants and food courts.
“After the launch of the second line, it is planned that the daily attendance of the shopping mall will be 20,000 people per day. Thus, it will become one of the most visited and popular commercial properties in Dnipro,” Director at UTG Yevhenia Loktionova said.
UTG (Kyiv) was founded in 2011. Its core business is accompanying of development projects.
More than 100 real estate projects were launched with the participation of UTG. Among them are Lavina Mall, New Way, Ocean Plaza, Gulliver, Piramida and Komod shopping centers (all based in Kyiv), Megamall (Vinnytsia), Most City Center (Dnipro), French Boulevard (Kharkiv) and Global.UA shopping centers (Zhytomyr).
According to the unified public register of legal entities and individual entrepreneurs, as of April 1, 2019, the share of 30% in the share capital of UTG LLC (Kyiv) belongs to Melnyk, 65% to Vadym Neposedov, and 5% to Artem Neposedov. 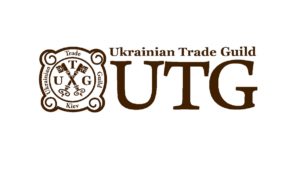 UTG consulting company (Kyiv) from May 1, 2019 moved from the Parus business center to a new office located in the Gulliver business center at 1A, Sportyvna Street, the press service of the company has told Interfax-Ukraine. “Since May 2019, UTG has been meeting its partners and visitors in a new office located in the Gulliver class A business center. Along with the expansion of the working space, UTG has increased its staff, thereby increasing the efficiency of service provision,” the company said.
According to the report, the increase in staff resulted from the merger of the offices of UTG and DC Evolution. In particular, the number of employees has grown to more than 50 people.
The new office of the companies is located on the 27th floor in A tower.
President of DC Evolution developer Ihor Melnyk acquired a stake in the share capital of the Ukrainian Trade Guild (UTG, Kyiv) and became a member of the board as vice-president in 2016.
UTG (Kyiv) was founded in 2011. Its core business is accompanying of development projects.
More than 100 real estate projects were launched with the participation of UTG. Among them are Lavina Mall, New Way, Ocean Plaza, Gulliver, Piramida and Komod shopping centers (all based in Kyiv), Megamall (Vinnytsia), Most City Center (Dnipro), French Boulevard (Kharkiv) and Global.UA shopping centers (Zhytomyr).
According to the unified public register of legal entities and individual entrepreneurs, as of April 1, 2019, the share of 30% in the share capital of UTG LLC (Kyiv) belongs to Melnyk, 65% to Vadym Neposedov, and 5% to Artem Neposedov.