SPANISH COMPANY WILL START DIRECT FLIGHTS FROM KIEV TO PARIS 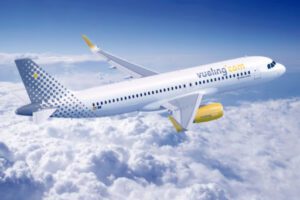 The Spanish low cost airline Vueling will open direct flights from Kyiv (Boryspil International Airport) to Paris (Orly International Airport) from December 5, 2021.
According to the ticket booking system, the airline will fly on the route twice a week: in December with a shifted schedule, and from January 2022 – on Tuesdays and Sundays with a departure from Paris at 06:55 and from Kyiv at 12:10.
Previously, flights between Ukraine and France were operated by UIA, Air France and SkyUp.
As reported, the Hungarian low cost airline Wizz Air announced plans to start operating flights to Paris from Kyiv and Lviv.
Vueling Airlines is a low cost airline based in Barcelona (Spain).
Ukraine and the European Union signed the Common Aviation Area Agreement on October 12. On June 28, 2021, the EU Council agreed to sign with Ukraine, as well as with three other countries – Armenia, Tunisia and Qatar – the Common Aviation Area Agreement. The process of uniting the Ukrainian aviation space with the EU was launched back in 1999. On December 12, 2006, the EU Council authorized the EC to start relevant negotiations with Ukraine. In October 2013, the text of the Common Aviation Area Agreement was agreed upon by the parties, however, due to foreign policy conditions, its signing was postponed indefinitely.