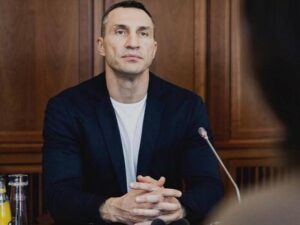 Ukraine needs to unite the position of the Europeans today, because this will achieve greater success and victory in the battle with Russia, believes boxer, brother of the mayor of Kyiv Vladimir Klitschko.
“The leader of Germany’s largest opposition party, the Christian Democratic Union, Friedrich Merz, was in Kyiv today. He met with the top leadership of Ukraine, met with the mayor of the capital. He expressed support and assured of further assistance to our state. And we are grateful for this. I am convinced that Ukraine today critically needs reliable and powerful partners, with whom it is necessary to talk, develop cooperation, be grateful for something, convince of something,” Klitschko wrote on Facebook on Wednesday.
He noted that Germany was concerned that Ukraine refused to accept German President Frank-Walter Steinmeier.
“The non-diplomatic statements of the Ukrainian ambassador to the German chancellor are also adding fuel to the fire. Now is not the time for emotions and excessive eloquence! I am sure that President Zelensky must nevertheless take a politically balanced step and invite the President of Germany, Ukraine’s strategic partner state, to Kyiv. We we need to unite the position of the Europeans today – this is how we will achieve greater success for our country and victory in the battle with the Russian aggressor,” Klitschko summed up.
In April, the German publication Bild, citing its own sources, reported that German President Frank-Walter Steinmeier planned to come to Kyiv along with government delegations from other EU countries, but Zelensky allegedly did not want to meet him because of the close ties of the German leader with Russia.
Later, Steinmeier himself said that Kyiv considered his possible visit to Ukraine undesirable, adding that Polish President Andrzej Duda had proposed a joint trip to Ukraine in recent days in order to “give a strong signal of European solidarity with Ukraine.”
Against this background, German Chancellor Olaf Scholz, according to the German edition Der Tagesspiegel, criticized Ukraine’s refusal to receive the German president on a visit, calling it “somewhat confusing” and urged not to underestimate the fact that Germany supplies Ukraine with anti-aircraft missiles and many other goods military purpose.
On April 13, President of Ukraine Volodymyr Zelensky said that the Office of the President of Ukraine had not received a request from the Office of the President of Germany regarding the visit of German leader Frank-Walter Steinmeier to Ukraine.
At the same time, he stressed that in the conditions of war and the daily death of people in Ukraine, she has the right to afford “to receive and be in the circle of those leaders of countries who really support her.”