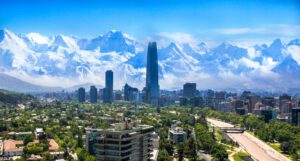 Ukraine is interested in resuming a dialogue on trade and economic relations with Chile, Deputy Minister of Economy – Trade Representative of Ukraine Taras Kachka said during an online meeting with Deputy Foreign Minister of Chile – Director of Bilateral Economic Affairs (at the General Directorate of International Economic Relations, DIRECON) Felipe Lopeandia.
“We are interested in expanding the presence of Chilean companies in the Ukrainian market and strengthening Ukrainian-Chilean business ties,” Kachka said.
According to the ministry, Chile is included in the list of the ten most promising countries for Ukraine for the development of trade relations.
“For the six months of this year, trade in goods and services between Ukraine and Chile grew by 7.9%, to $ 33.1 million, Ukrainian exports doubled to $ 5.3 million,” the ministry said.
According to Taras Kachka, the countries need to improve the balance of bilateral trade, diversify trade spheres and start joint investment projects.
According to the report, promising for Ukraine and Chile is the development of bilateral relations in the field of agro-industrial complex, energy, mechanical engineering, aircraft building, shipbuilding, as well as space, mining, pharmaceutical and transport industries.

DUDA’S VISIT TO UKRAINE TO BE DEVOTED NOT ONLY TO POLITICS, BUT ALSO TO EXTENSION OF ECONOMIC RELATIONS 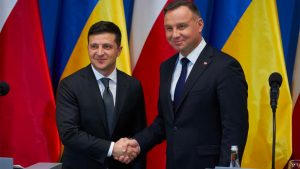 Deputy Head of the Office of the President of Ukraine Ihor Zhovkva notes that during the visit of Polish President Andrzej Duda to Ukraine on October 12-13, considerable emphasis will be placed on economic cooperation between the two countries, in particular, in the development of infrastructure.
“The President of Poland will visit not only Kyiv, but together with President Zelensky will visit Odesa, where a separate business event will be held, which will be aimed at infrastructure topics. A number of agreements will be signed, in particular, on our maritime infrastructure,” he said in an interview with the Interfax-Ukraine agency.
Zhovkva pointed out that the topic of Ukrainian-Polish relations is expanding to the sphere of economics. “We are talking not only about politics, about the historical past, which, of course, will be discussed during the visit, but also about our economic relations. After all, Poland is one of our largest partners in Europe in terms of trade,” he said.
The deputy head of the President’s Office recalled that the visit of Polish President Duda to Ukraine was planned in the spring of 2020, and it is very important, because for the first time in the past three years, the President of Poland is visiting Ukraine. In 2017, Duda was in Kharkiv, and he was in Kyiv the last time in 2016.