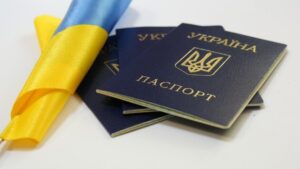 Citizens of Ukraine wishing to cross the state border have been extended the opportunity to do so using their internal passport, the State Border Service reported.
“The possibility of crossing the border by citizens of Ukraine on internal passports has been extended. This decision was made in view of the situation that is developing on the territory of Ukraine during martial law, when citizens of Ukraine cannot quickly and timely issue a passport of a citizen of Ukraine for traveling abroad (foreign passport),” the statement says. message on the agency’s Facebook page on Monday evening.
The State Border Service stressed that this decision applies to all citizens, regardless of the areas from which they are sent.
The department recalled that children under the age of 16 can leave Ukraine if they have a passport of a citizen of Ukraine or a birth certificate of a child (in the absence of a passport of a citizen of Ukraine).
“In some cases, while staying abroad, there may be an urgent need for a passport, which is determined by the legislation of the countries where our regions plan to be, or when traveling between different countries. Therefore, we advise Ukrainian citizens to take into account different situations and, if possible, issue a passport for themselves even before crossing the border,” the statement said.