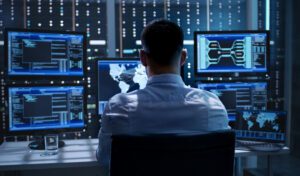 The issue of permits for temporary travel of IT specialists abroad will be resolved during June-July, predicts Oleksandr Fediyenko, Deputy Head of the Verkhovna Rada Committee on Digital Transformation (People’s Deputy from the Servant of the People faction).
“I think that all this will be done within the framework of the adopted law on Dia.City. Most likely, we will talk about those enterprises that meet the criteria of Dia.City. This is my forecast. Most likely, this will be done throughout this and the next month, when summarizing work will be done to develop appropriate mechanisms for booking the departure of the relevant employees of the relevant specialized companies,” he said in a commentary to the Kyiv TV channel.
Fedienko noted that in the future, companies that meet pre-defined criteria will submit documents and argue the need to travel abroad for their chosen employees.
The MP also stressed that this is done in order to allow IT companies to fully work with foreign clients and fill the Ukrainian budget.

EXPERTS NOTE TTREND OF RETURN OF IT SPECIALISTS TO UKRAINE 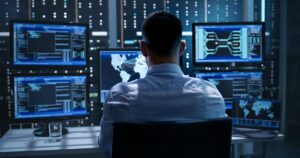 SoftServe, an IT company with Ukrainian roots, announced the active return of its own specialists from abroad and from western regions.
An average of 10-20 people return home from overseas and western regions every day, the company said in a statement released on Wednesday.
“Since the beginning of Russia’s invasion of Ukraine, the SoftServe IT company has relocated more than 4,000 employees to the western regions and abroad. However, since May, the company has observed a trend towards the return of IT specialists to their usual locations – now 1082 people have returned home”, – is noted in the message of the company.
According to SoftServe, since May, the dynamics of people returning from abroad has been constant: according to the company’s internal statistics, 10-15 people return to Ukraine every day.
“In May, the most people were outside Ukraine – 1,900 employees. Since then, this figure has steadily decreased, and now 314 employees have arrived in Ukraine. According to surveys, about 170 more are planning to return home as soon as possible. However, we, as a company we go as far as possible towards the decision of employees regarding where to work from.For those who want to stay abroad, we offer the possibility of employment in local branches of the company for a year or even longer in the hub countries: Poland, Romania, Bulgaria and Latin America”, – comments Ekaterina Gubareva, VP HR SoftServe.
Most of all, SoftServe IT specialists return to Kyiv: as of the beginning of June, more than 400 people arrived there.
“Our offices in Kyiv have not closed their doors to employees and their families since the beginning of the war and have served as a shelter and place of work. When it became relatively safe, we switched to normal operation. Now two of our offices have co-working spaces, where an average of 10 % of employees, but there is an upward trend. In the summer, we plan to launch a certification center and equip a parking lot with chargers for electric cars,” Elena Lebedeva, director of the Kyiv development center, is quoted in the message.
Slower, but also brass knuckles, the number of people who return to the Dnieper (+38 people since April) and Kharkiv (+10 people since May).
However, 10 workers have left Odessa since May.
In addition, there is a trend towards returning to their usual places of residence of workers who were forced to leave for the western regions of Ukraine.
In total, more than 1,100 SoftServe employees have moved since the beginning of the war in Lviv, Ivano-Frankivsk and Uzhgorod – now almost a quarter of them have already left, and this process is dynamic.
Almost half of the people who relocated to the city since the beginning of the war left Ternopil.
Less active workers are leaving Vinnitsa, Khmelnitsky and Rivne.
According to internal surveys, as of today, 99% of SoftServe employees say they are safe. For comparison, in March this figure was 84%.
SoftServe is included in the list of the largest IT service companies in Ukraine. To date, it has about 13.5 thousand employees and 40 offices around the world. The main offices of the company are located in Lviv and Austin (Texas, USA). The company’s development centers are located in Lviv, Kyiv, Dnipro, Kharkov, Rivne, Ivano-Frankivsk, Chernivtsi, Uzhgorod, Ternopil, Odessa, Vinnitsa and Khmelnitsky, as well as in Poland, Bulgaria, Romania and Latin America. 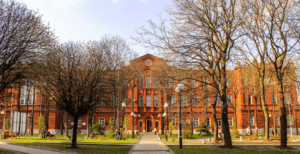 The Innovative Campus for the training of IT specialists, implemented with the support of the UFuture holding, has opened on the basis of the National Technical University Kharkiv Polytechnic Institute.
According to the press release, under the project, a two-story building of the former university canteen with an area of 2,700 square meters is being renovated. The campus is designed for 300 students.
The first floor of the building includes a training cluster and a conference hall, on the second floor there are club offices and co-working spaces. The work is scheduled to be completed in 2022.
“The new campus should help young people who want to develop and connect their future with Ukraine. The world is changing rapidly, we need more such projects. Regardless of external or internal circumstances, we will continue to create an innovative infrastructure,” the founder of UFuture, Vasyl Khmelnytsky, said.
The construction of the campus is financed, among other things, by investments from UFuture and Kharkiv-based IT company NIX Solutions in the amount of UAH 8 million. Khmelnytsky’s K.FUND also allocated UAH 10 million for the purchase of equipment.
According to the press service of UFuture, the new technology for training IT specialists used on the campus provides for the transition from a declarative to a project-based learning scheme, and received support from the Ministry of Education and Science of Ukraine.
UFuture is a holding company that brings together Khmelnytsky’s business and social projects. It has a diversified portfolio of assets in real estate, infrastructure, industry, renewable energy, pharmaceuticals and IT. The value of UFuture’s assets is estimated at $500 million. The total capitalization of the businesses in which it has invested is up to $1 billion. 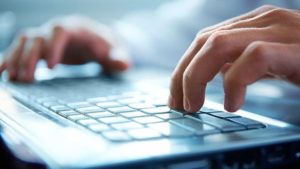 The number of employed IT specialists in line with the Labor Code of Ukraine is 2-3%, and the rest of IT specialist work as private entrepreneurs or under a contract, Vice President for Strategy and Technologies at GlobalLogic Ukraine Andriy Yavorsky has said in an interview with Interfax-Ukraine.
According to him, this situation has arisen due to high taxes in official employment – more than 40%.
“In the current international market, this kind of tax burden is greater than in Poland, and in fact comparable to Germany. It is clear why Poland sets such prices. It is in the same legislative field with Europe, in the same legal field. There are requirements to General Data Protection Regulation (GDPR), there are no borders, good infrastructure, while Ukraine is perceived in this respect as a country that should be “cheaper.” So what’s the point of paying such money in Ukraine when it can be spent without risks on specialists in America or Europe? And this forces companies to collaborate with specialists working as private entrepreneurs,” he said.
Yavorsky said that in order to accelerate the process of transition from an outsourcing model to a product model in Ukraine, the country needs reforms in economic policy and legislative acts.
“We need engineers, capital and entrepreneurs. At least we have good engineers. In order for capital to appear, we need reforms in economic policy and legislative acts,” the top manager said.
According to Yavorsky, for entrepreneurs to appear, it is necessary to create conditions that will allow them to stop their outflow abroad. “When Ukraine has a stable economic policy and the possibility of raising capital, our entrepreneurs will return and will be able to build a lot, already within and for the benefit of their own country,” he said.