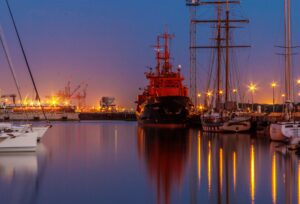 Lithuania is ready to help Ukraine export unsold volumes of grain from last year’s harvest, Lithuanian Minister of Communications and Transport Marius Skuodis told reporters.
According to him, grain can be transported through Poland to the port of Klaipeda. Companies have already submitted proposals.
“We have been working with the Ukrainians for several weeks now, the most important thing is coordination with the railways. Several companies have already received specific proposals for transportation from the Ukrainian-Polish border to the port of Klaipeda,” Skuodis said.
At the same time, he noted that the main problem lies in the different width of the railway track of the Russian and European types.
“It is rather difficult to switch from Russian standard tracks to European ones in Poland, then to the Kaunas intermodal terminal and beyond. These are issues related to the availability of wagons and other things,” Skuodis said.
According to him, a trial train is already planned, which should leave in the coming weeks.
“The trial run is scheduled for April. We are ready for our part, we just need customers, and we can try in late April – early May, then we’ll see. Of course, the most direct route will be through Belarus, but this country is involved in certain military operations, therefore it would be impossible,” Skuodis said.
Grain export from Ukraine was disrupted due to Russia’s military actions on Ukrainian territory.
According to the head of the European Commission in Lithuania, Marius Vashchega, Ukraine occupies 10% of the world wheat market, 13% – barley, 15% – corn, more than 50% of the sunflower oil market.