The National Anti-Corruption Bureau of Ukraine (NABU) and the Security Service of Ukraine (SBU) under the procedural direction of the Prosecutor General’s Office (PGO) have detained Deputy Minister for Temporarily Occupied Territories and Internally Displaced Persons (IDP) of Ukraine Yuriy Hrymchak and his assistant for soliciting a $1.1 million bribe.
As reported on Wednesday on the NABU Facebook page, the deputy minister and his assistant were exposed and detained on suspicion of committing a crime under Part 4 of Article 190 of the Criminal Code of Ukraine (fraud committed in respect of an especially gross amount, or by an organized group).
“The indicated persons, allegedly for exerting influence on decision-making by persons authorized to fulfill the functions of the state, demanded unlawful benefit from the representative of a legal entity in the total amount of $ 1.1 million,” the NABU reported.
According to the bureau, the official and his assistant were caught red-handed while receiving part of the funds in the amount of $480,000.
The SBU press center on a Facebook page said that the criminal proceedings are being investigated by a joint investigation team consisting of representatives of the NABU, SBU and prosecutors of the process management department of the procedural management department in criminal proceedings on crimes of a special category of the PGO.
Earlier that day, the SBU press service reported that Hrymchak’s home was being raided. 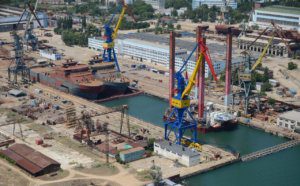 Smart Maritime Group (SMG) of Smart-Holding considers the decision of the business court in Mykolaiv region about declaring Chornomorsky Shipbuilding Yard (Mykolaiv), part of SMG, bankrupt a consequence of the destructive position of the Prosecutor General’s Office (PGO). SMG is preparing a petition to the Security Service of Ukraine (SBU) on the issue, the press service of SMG reported on Thursday. Explaining their position, SMG recalled: since July 2017, at the request of the PGO investigators in the investigation of the case “about the alleged failure to fulfill investment obligations in the privatization of the Chornomorsky Shipbuilding Yard in 2003-2012,” all property of the enterprise and the shares issued by it are seized.
This circumstance made it impossible to implement the readjustment plan of the Chornomorsky Shipbuilding Yard, which includes, inter alia, the sale of the shipyard’s non-production assets to meet creditors’ claims. However, the readjustment head Oleksandr Ostapenko in June personally appealed to Prosecutor General Yuriy Lutsenko with a request to remove the arrest for the readjustment measures, which expired on July 1, the SMG said.
At the same time, the press service said that the working group set up under the Ministry of Defense to solve the problematic issues of the state corvette program, implemented with the participation of the Chornomorsky Shipbuilding Yard, as a promising option for separating a new enterprise from the PJSC and transferring all the responsibilities for the project to it. “The relevant measures were included in the readjustment plan and approved by a court decision binding its execution on the entire territory of Ukraine from the moment of its entry into force,” the press service said.
“Thus, the position of the prosecutor’s office led to the liquidation of the leading enterprise of the military shipbuilding of Ukraine and losses to the national budget. Some 74 million UAH of advance payments will be lost on contracts with nonresidents,” the press service said.
However, the recognition of the Chornomorsky Shipbuilding Yard as a bankrupt and its liquidation call into question the probability of implementing the state Corvette program: “The built corvette hull will be included in the liquidation mass for further implementation,” the press service said.
The company prepared an appeal to the SBU with a request “to deal with the anti-state position of representatives of the PGO,” the press service said.