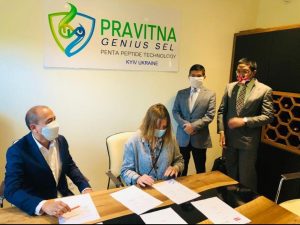 The Ukrainian-Indonesian company Pravitna Genius Sel in partnership with the Canadian company Immunitor (Vancouver) plans to launch pharmaceutical production in Kyiv region by the end of the year.
Freddy Cahyono, the CEO of Provitna Genius Sel, told Interfax-Ukraine that the respective agreement of intent was signed on October 7 by the representatives of the companies with the participation of the Indonesian Embassy in Ukraine.
Pravitna Genius Sel’s investments in launching production in Kyiv region amounted to about $1 million. By the end of 2020, the company plans to obtain a GMP certificate.
One of the first drugs, the production of which is planned by Pravitna Genius Sel, will be a drug that will stimulate the immune system, which will not only treat diseases, but also prevent their occurrence.
For the production of the drug, Canadian raw materials will be used. Freddy Cahyono noted that the drug, which will be produced in Ukraine, is to be exported abroad, in particular to Indonesia. By the end of the year, the company intends to register the medicine in Ukraine.
In turn, Ambassador of the Republic of Indonesia to Ukraine Yuddy Chrisnandi noted the high export potential of the drugs produced in Ukraine.
“These drugs will be able to be used not only in Ukraine, but throughout the world, including in Indonesia. I hope that they will contribute to the fight against epidemics,” he said.