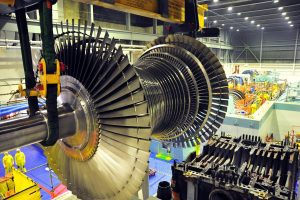 RIVNE NUCLEAR POWER PLANT REDUCES OUTPUT OF REACTOR NO. 1 TO 50%

The Rivne nuclear power plant on July 18 reduced the output of its power unit No.1 (VVER-440) to 50%, having disconnected the TG-2 turbo generator at 05:26 a.m. Kyiv time on Thursday, July 18, after the leakiness of the condensate electric pump line of a turbine unit had been revealed, National Nuclear Energy Generating Company Energoatom’s press service said.
The causes of the incident are being checked. The TG-2 turbo generator is to be put into operation before 02:00 p.m. on the same day.
Energoatom said the incident is rated as “zero,” according to the INES nuclear event assessment scale, or “out-of-scale.”
Thus, as of Thursday morning, 10 of the 15 power units of four operating Ukrainian nuclear power plants were in operation.