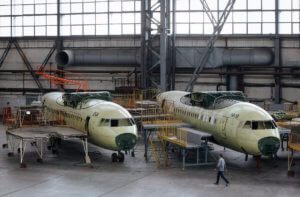 America’s Boeing will supply components for the family of Ukraine’s regional new generation An-148/158/178 planes developed and produced by Ukraine’s state-owned state Antonov concern based in Kyiv. At Farnborough Airshow 2018, Antonov and a division of Boeing – Aviall Services, Inc. – signed a general terms agreement for cooperation in the production of the modernized An-148, An-158, An-178 aircraft, the family of which will be designated as “An-1X8 NEXT,” Antonov said on Facebook.
“Within the framework of this cooperation, Aviall Services, Inc. will ensure the procurement and delivery of a wide range of components for the serial production of these aircraft and the provision of their post-sales support,” the post says. “As a result of the agreement with Aviall, Antonov has a reliable partner, which will become an important integrator in the process of acquiring a number of western-made components within the import substitution program, including the launch of the serial production of the newest An-type aircraft and post-sales support,” the post says, quoting Antonov President Oleksandr Donets.
The An-178 is being created to replace the An-12, according to experts, who say it may become a modern replacement for the French-German C-160. The aircraft has a modified fuselage shape, a ramp for loading and unloading oversized cargo and is capable of carrying up to 18 tonnes of cargo, including heavy-duty sea containers.
About 200 companies from 15 countries are involved in production cooperation under the An-178 program. Antonov is promoting the An-178 program, including in the Middle East and Central Asia. The UAE, China and Azerbaijan have already shown interest in the new Ukrainian transport carrier. The debut show of the An-178 was held at Le Bourget 2015 (Paris, France), where the new Ukrainian carrier became one of the main events, as well as at the regional Dubai Air Show 2015 (UAE), where it was showcased. According to the sources of the Kyiv-based Interfax-Ukraine news agency, Antonov is also negotiating the joint development of the An-178 program with European members of NATO.
State Enterprise Antonov is a leading Ukrainian developer and manufacturer of aircraft equipment, a recognized world leader in the manufacture of transport aircraft. Under a government decision, the enterprise in 2015 was incorporated in state-owned Ukroboronprom Concern.
Farnborough is one of the largest and most prestigious world specialized exhibitions of civil and military aerospace products. According to organizers, more than 15,00 exhibitors from 52 countries are showcased at Farnborough 2018, which is taking place in the suburbs of London on July 16-22.
Ukraine’s new transport An-178 with a payload capacity of 18 tonnes is demonstrated at the air show.