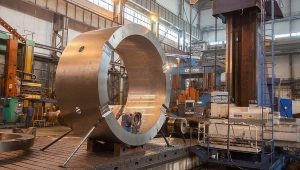 PJSC Energomashspetsstal (Kramatorsk, Donetsk region), owned by Russia’s Atomenergomash (Rosatom state corporation), sold products worth UAH 3.324 billion in 2020, which is 71% more than in 2019.
According to the information on the company’s website, the share of exports in total sales was 94.4%.
Over the past year, Energomashspetsstal shipped 21,430 tonnes of products to customers, and the key objects of supply were such nuclear power plants (NPP) as: Kudankulam (India), Akkuyu (Turkey), Tianwan (China) and Xudap (China).
“According to the plan, in 2021 it is planned to produce and sell products for at least UAH 3.043 billion,” the report said.
According to Energomashspetsstal, a significant event in 2020 was the development of a new technology for the manufacture of shanks and low-pressure rotor discs, which made it possible to successfully pass the qualifications of General Electric and start serial production of products for the Akkuyu NPP under construction in Turkey.
The press service also said that by the beginning of this year, 1,525 people worked at the enterprise, and the average monthly wage increased by 16% by 2019, to UAH 18,380.
The report, citing acting Marketing and Sales Director at Energomashspetsstal Yuriy Shportko, said that the company’s order portfolio is full for 2021.
“In 2020, the plant received a number of serious orders. An important direction will be the production of large-sized castings for the ship’s energy system. Work will also continue to produce billets for the nuclear power plants under construction in India, Turkey and China. Prospects for the supply of products to Egypt for the El-Dabaa NPP are being considered. In addition, we plan to supply rolled products to new markets in the United States, Canada, Mexico and China,” the press service said, citing Shportko.
Energomashspetsstal is the largest Ukrainian manufacturer of special cast and forged products of individual and small-scale production for metallurgy, shipbuilding, energy (wind, steam, hydro, nuclear) and general mechanical engineering. 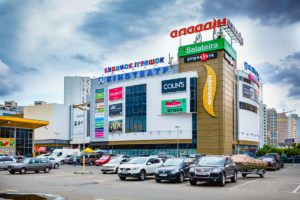 Meyer Bergman international investment fund (London) has finalized a deal to sell the Aladdin shopping and entertainment center with gross building area (GBA) of 16,500 square meters located at 3A, Hryshka Street in Kyiv to UCPIH Ltd, a member of the Dragon Capital group of companies.
“We are very pleased to have completed this acquisition and add Aladdin to our portfolio of shopping centers, which now will consist of Piramida and Aladdin (Kyiv), Sky Park (Vinnytsia) and Victoria Gardens (Lviv) occupying in total over 160,000 square meters,” Managing Director of Private Equity at Dragon Capital Volodymyr Tymochko said.
He said that Dragon Capital is determined to capitalize on it by optimizing the center’s concept and tenant mix. The deal value is not disclosed.
Aladdin Shopping Mall, with a gross leasable area (GLA) of 10,571 square meters, is located in a densely populated residential district right next to Pozniaky metro station and close to Piramida, a shopping center the company acquired in 2016.
As reported, Meyer Bergman acquired Aladdin center in 2008 for $60 million.