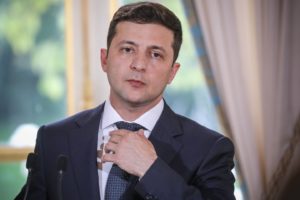 Ukrainian President Volodymyr Zelensky has said that he is holding consultations with people who he potentially sees at the post of the Ukrainian prime minister. He said that these are people who do not have a political past and who are professional economists.
“The Prime Minister … must be an absolutely professional economist who must have no political [past]. I would very much like this to be an absolutely independent person who has never been a prime minister, a speaker or a leader any [parliamentary] faction. I see this kind of person. Honestly, I will tell you. I am already holding consultations, talking … with some people,” Zelensky told reporters at a polling station on Sunday.
The head of state said that he has an unchanged position as for the issue of voiced requirements for the prime minister, but admitted that “some people who go to parliament now may not like it because they see themselves in this post.”