IRISH RYANAIR DOES NOT RULE OUT OPENING OF SUBSIDIARY IN UKRAINE 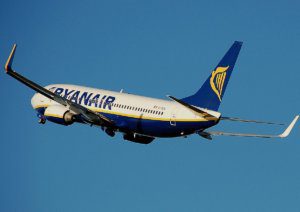 The Irish low cost air carrier Ryanair, which intends from October 2018 to launch flights to Kyiv and Lviv, does not rule out the opening of a subsidiary in Ukraine in future, but this should be preceded by the development of the network and the basing of planes here, Ryanair CEO Michael O’Leary has said at a press conference at Boryspil airport. “We have confidence that at least two large airports will be added in the next two years, and more routes from Kyiv and Lviv. The next big stage, which we have already discussed with the minister [Minister of Infrastructure of Ukraine Volodymyr Omelyan] is the possibility of opening bases in Ukraine. This can happen when we operate in three or four airports and have a certain number of routes. We expect that in Ukraine we will grow faster than in Poland,” he said.
The expert stressed that it is too premature to talk about the Ukrainian subsidiary, first 15 new routes should be launched and passenger traffic should start growing.
As reported, Ryanair in October 2018 will launch flights on ten directions from Kyiv and five from Lviv. Thus, the company will launch flights from Kyiv to Barcelona (four flights a week), Bratislava and Wroclaw (three), Warsaw (four), Krakow (three), Poznan and Gdansk (two each), Vilnius and Stockholm (three each) London (five), from Lviv to Krakow (three), Warsaw (three), Dusseldorf (three), Memmingen (two), and London (three). 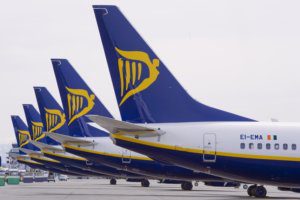 Ireland’s low cost airline Ryanair will study a possibility of opening new bases in Ukraine, along with Kyiv and Lviv, and launching of domestic flights.
An Interfax-Ukraine correspondent has reported that Ryanair CEO Michael O’Leary gave this information at a press conference in the Boryspil airport (Kyiv) on Friday devoted to the arrival of the airline to Ukraine.
“We will study the possibility of launching domestic flights. We hope that maybe in the not-too-distant future we would be able to speak about opening of bases not only in Kyiv and Lviv, but also in other cities of Ukraine,” he said.
As reported, the Boryspil and Lviv international airports on Friday, March 23, signed contracts with low-cost air carrier Ryanair on the beginning of flights to Ukraine. The company has already started selling tickets for Ukrainian flights in its booking system.
Present at the event, Ukrainian President Petro Poroshenko said that Ryanair will start flights in October 2018 and launch flights to 10 destinations from Kyiv, five from Lviv and in the first year of operation will transport 1 million Ukrainians.
In turn, O’Leary corrected him: “We do not expect that there will be a million Ukrainians in the first 12 months of operation. 40% of them will be European travelers who will come to Ukraine. We expect 850,000 passengers for the first year, and for the second year, it is possible to cross the line of 1 million.”
According to him, Ukraine is becoming a very attractive tourist destination. “We expect that we will bring hundreds of thousands of Europeans to Kyiv, Lviv and eventually to Odesa and other cities,” the head of Ryanair said.
He thanked Minister of Infrastructure of Ukraine Volodymyr Omelyan and his team for “very tough negotiations that had been going on in recent months,” adding that the airline is inspired, it is ready to grow rapidly and develop its presence in the country. 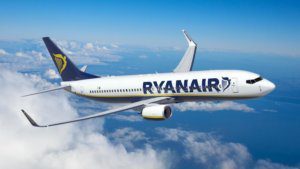 Ireland’s low cost airline Ryanair plans to launch flights to Ukraine as second attempt in October 2018. The airline intends to launch flights on 15 routes from Kyiv and Lviv. According to the Lowcostavia.com.ua portal, the Ryanair mobile application provided a possibility of searching for flights from Lviv and Kyiv and later it disappeared.
The portal said that the application had new destinations from Kyiv to Barcelona, Bratislava, Wroclaw, Warsaw, Krakow, Poznan, Gdansk, Vilnius, Stockholm and London and from Lviv to Krakow, Warsaw, Dusseldorf, Memmingen and London. The frequency of flights is from two to four a week. The tickets could appear for sale on Friday, March 23.