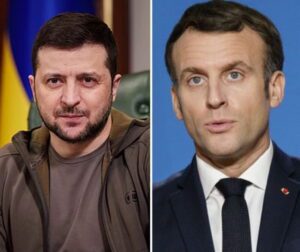 According to the channel, Macron “promised to increase support for Ukraine by transferring weapons and humanitarian aid.”

FRENCH PRESIDENT MACRON IS NOT GOING TO VISIT KYIV YET 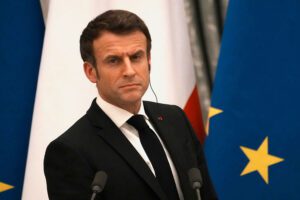 French President Emmanuel Macron said that at this stage he does not plan to visit Kyiv, as he does not believe that such a visit will bring concrete results.

“I think that in my case a trip to Kyiv would make sense only if it can bring real benefits to Ukrainians,” he explained his position to French journalists.

According to Macron, he is not going to visit the Ukrainian capital for the time being, because he does not want to “follow fashion’s lead.”

At the same time, the French president assured that he welcomes the recent visits to Kyiv by other European leaders, as “this shows European solidarity.” 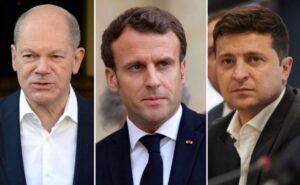 “Spoke with Olaf Scholz, Emmanuel Macron. We discussed countering the aggressor, Russia’s crimes against civilians. I ask my partners to help in releasing the captive mayor of Melitopol. Prospects for peace talks also discussed. We must stop the aggressor together,” Zelensky said. 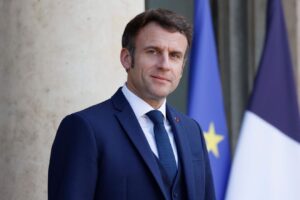 French President Emmanuel Macron continues to rely on diplomacy to end the war in Ukraine.
“We will continue to exert diplomatic pressure to stop this war,” Macron said on Monday on the LCI television channel.
“We want to end this war without becoming a belligerent,” the president said.
At the same time, he noted that the French have reason to worry about “military operations in Europe.” 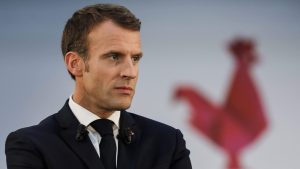 French President Emmanuel Macron may visit Ukraine by the end of the first half of the year, said French Ambassador to Ukraine Etienne de Poncins.
“We do not have a date at the moment because of the pandemic. President Macron does not travel at the moment. He did not leave France since mid-December now. His last visit was to Brussels, not a bilateral one and not very far. I want to be very prudent, but my expectation is that this visit could occur by the end of the first semester,” the ambassador said in an interview with Interfax-Ukraine.
De Poncins pointed out that there is a great need for this visit, since the last French president who officially visit Ukraine was Jacques Chirac in 1998.
“The principle of a visit is agreed, for as I have said there is a very good relationship between the two presidents and President Macron is very keen to come. President Zelenskyy confirmed several times the invitation. There is a lack of visits at the highest level between our two countries. The last French President who officially visited Ukraine was Jacques Chirac, in 1998. It was a very long time ago. Therefore, there’s a need for it. And there is a lot of substance for such a high level visit,” he stressed.
The ambassador noted that the visit will focus on bilateral programs, as well as the political dimension.
“About the substance, there will be a lot to focus on. There are some very important bilateral programs: helicopters, patrol boats, locomotives, water plant facilities in Mariupol. We have some other projects in Luhansk area. This is just for economy. The cultural, scientific, university and linguistic part is a big one too. I can tell you that if President Macron comes, he will be overloaded with projects and programs. Political dimension will obviously also be at the core of a presidential visit,” de Poncins said.