UKRAINE EXPORTS 17.9 MLN TONNES OF WHEAT WITHIN MEMO SINCE START OF MY 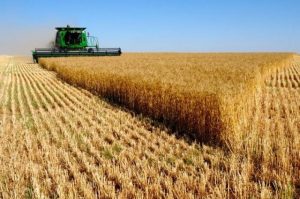 The dynamics of wheat exports is within the “safe” corridor agreed in the memorandum, in particular, as of April 6 wheat exports amounted to 17.9 million tonnes, the Ministry of Economic Development, Trade and Agriculture of Ukraine has reported.
According to the annex to the memorandum between the Economy Ministry and the market participants signed on March 30, the maximum volume of wheat exports in the current marketing season (MY, July-June) was set at 20.2 million tonnes.
“Thus, during April-June 2020 some 2.3 million tonnes remain available for export,” the ministry said on its website.
The ministry noted that the pace of wheat supplies in April slowed down. The average daily shipment of wheat supplies in April was 14,000 tonnes, while in March it was 44,000 tonnes.
According to the ministry, in the 2018/2019 MY some 28.3 million tonnes were produced, domestic consumption was 8.2 million tonnes, ending stock stood at 1.7 million tonnes.