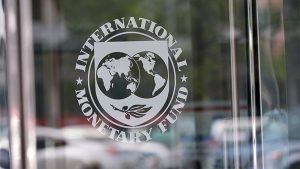 Ukraine has all chances to sign a new financial agreement with the International Monetary Fund (IMF), but it is the Verkhovna Rada is to do the final step, First Deputy Governor of the National Bank of Ukraine (NBU) Kateryna Rozhkova has said.
“Ukraine as a state today continues negotiating on attracting IMF assistance… The chances are great, but the last step is ours, in fact, it is the Verkhovna Rada, which must adopt two bills, which are the so-called prior actions. This is the land bill and the bill about banks,” Rozhkova said during a press briefing on Friday.
She also said that the IMF is ready to increase the scope of the Extended Fund Facility (EFF) compared with the previously agreed $5.5 billion.
“We are optimists. If the EFF is approved, Ukraine will be able to go through difficult times to combat the virus,” Deputy Governor of the central bank Oleh Churiy said.

The updated macro-forecast of the National Bank of Ukraine (NBU) assumes receiving $2 billion from the International Monetary Fund (IMF) under the Extended Fund Facility, deputy governor of the NBU Dmytro Sologub has said at a press conference in Kyiv.
“We expect that in the fourth quarter the new program is likely to start with the IMF, and Ukraine will receive $2 billion. And we also expect $2 billion in each of the next years as part of the new structural financing program,” he said.
Sologub stressed that such an assessment is an expert commentary. According to him, if the funds arrive a little earlier or a little later, it will not have a significant impact on other macroeconomic parameters, except for international reserves.
The banker also estimated, based on the example of other countries and the size of Ukraine’s quota in the IMF, that the size of the new program could be in the range of $5-10 billion for a period of 36 to 48 months.
“We have no insight, this is our expert assessment,” he said.
Sologub also said that the National Bank laid down in its forecast another entry of Ukraine to foreign markets with eurobonds in the amount of about $1 billion as its expert assessment.