RESTRUCTURING PLAN OF UKRZALIZNYTSIA TO BE READY BY END OF 2019 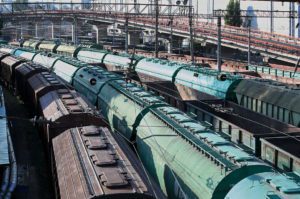 A plan on restructuring of JSC Ukrzaliznytsia, which foresees division of the company into three operators (infrastructure, freight and passenger) and a production block, will be prepared by the end of 2019, Ukrzaliznytsia head Yevhen Kravtsov wrote on Facebook.
“We will fulfill the order of [President of Ukraine] Volodymyr Zelensky in time,” he said.
According to Kravtsov, a gradual plan would become a part of the implementation of the Ukrzaliznytsia’s strategy agreed with the Cabinet of Ministers and approved by the supervisory council in June 2019. After the plan is fulfilled and approved by the supervisory board, Ukrzaliznytsia will begin making certain steps under the control of the government, he added.
“[Infrastructure Minister] Vladyslav Krykliy, [Prime Minister] Oleksiy Honcharuk back European model. The main is that infrastructure remains under state regulation, when passenger and freight carriages are carried under the market conditions,” he said.
As reported, Ukrainian President Volodymyr Zelensky has instructed the Cabinet of Ministers of Ukraine to prepare a plan on restructuring of JSC Ukrzaliznytsia by the end of 2019.
The president appointed Honcharuk and Krykliy responsible for the preparation of the plan.