TRANSACTIONS WITH PAYMENT CARDS OF UKRAINIAN BANKS UP BY 24.5% 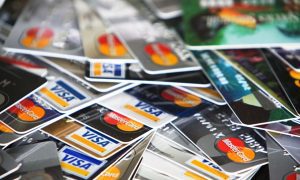 The total number of transactions (noncash and cash) using payment cards issued by Ukrainian banks amounted to 1.385 billion units, and their amount was UAH 920.5 billion in January-March 2020, which is 24.5% and 15.6%, respectively, more than in the same period of 2019, according to the data of the National Bank of Ukraine (NBU), released on its website on Thursday, May 21.
According to the data, noncash transactions prevailed in both quantity and amount, for example, Ukrainians carried out 1.183 billion noncash transactions (85.4% of the total) for a total of UAH 503 billion (54.6% of the total).
The regulator said that in the first quarter, the largest number of transactions using cards accounted for settlements in retail chains, namely 50.3%, however, person-to-person transfers prevailed by the amount of 41.3%, the average size of which was UAH 1,505.
The NBU said that the total number of issued payment cards in Ukraine as of April 1, 2020 reached 68.6 million. However, in March all expenditure transactions were carried out using 53.4% of all payment cards, in February with use of 53%, in January with use of 53.2% payment cards.
The regulator said that from January, banks began to report to the NBU monthly, whereas earlier they did it on a quarterly basis, and therefore, active payment cards were also calculated every month, however, comparison with last years’ indicators became impossible.
According to the NBU, a third, or 11.3 million of payment cards that were used for expenses in March were either contactless or tokenized.
Thus, in March 8.9 million contactless payment cards and almost 2.5 million tokenized ones were used for transactions, which is 16% and 11.2% more than in January 2020.
The regulator said that nine out of ten (90.2%) of trading POS terminals provide contactless payment, whereas eight out of ten were contactless in 2019. When compared with the beginning of 2020, there is a 0.7% decrease in the number of working trading POS terminals due to lockdown restrictions introduced in March.
According to the NBU, the number of payment terminals in the trading network per one million of permanent residents as of April 1, 2020 amounted to 8,300.
“The regional distribution of the terminal network in Ukraine is quite irregular. The smallest number of payment devices per an inhabitant is observed in the west of the country and in Luhansk and Donetsk regions,” the regulator said, adding that Kyiv city and Kyiv, Dnipropetrovsk and Kharkiv regions prevail in the number of payment cards and payment devices.
Thus, as of April 1, 2020, some 70 participants of card payment systems were registered in Ukraine.