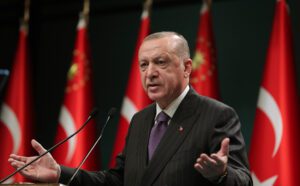 Turkey continues to maintain contacts with both Ukraine and Russia, and the primary task of its diplomacy is to achieve a settlement of the situation, the Anadolu agency quoted Turkish President Recep Tayyip Erdogan as saying.
“We maintain diplomatic contacts with both sides, discuss all proposals and support all initiatives aimed at establishing peace,” he said at a press conference following the NATO summit in Brussels.
Erdogan noted that Turkey maintains special relations with both countries.
“For this reason, the first task of Turkish diplomacy is to stop hostilities. Peace in Ukraine must be ensured according to a formula that will suit the two countries and the world community. It must be a stable and strong peace,” the Turkish President added.