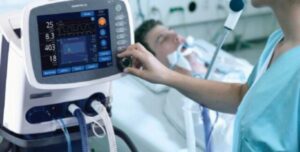 The International Charitable Foundation for Helping Children Parimatch Foundation donated two modern artificial lung ventilation (ALV) machines worth UAH 2.5 million to the Okhmatdet National Children’s Specialized Hospital (Kyiv).
According to a press release from the fund, the devices have already been installed and are working.
“If you ask any resuscitator in the world what their biggest problem is, the answer is ventilators, you can never have too many of them. we have as many devices as there are patients. And this is a big problem,” said Alexander Urin, head of the department of intensive and efferent therapy for acute intoxications at Okhmatdet.
He stressed that Okhmatdet has now turned into a full-fledged hospital, where children and adults wounded as a result of Russian shelling are continuously treated.
In turn, the representative of the Parimatch Foundation in Ukraine, Vadim Misyura, noted that with the outbreak of the war, the foundation opened a fundraiser to help civilians in troubled spots in Ukraine. All funds raised will be used to purchase and deliver food, medicines, essentials, as well as to organize evacuation from the temporarily occupied territories and areas where hostilities are taking place, the press release says.