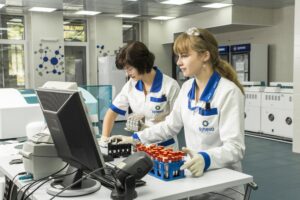 In March-April 2022, the Synevo laboratory paid UAH 35 million in taxes and fees to the budget, commercial director of the Synevo laboratory Mykola Skavronsky said.
“For March and April 2022, the Synevo company still paid about UAH 35 million in taxes and fees to the state,” he wrote on his Facebook page.
Skavronsky also said that in March and April 2022, the Synevo laboratory paid UAH 67 million to its employees “1.5 times more money than the entire revenue for these two months”, the total cash receipts of Synevo during this time amounted to UAH 47 million.
“Financial support for our employees in the first months of the war was provided exclusively at the expense of Synevo’s own reserves,” Skavronsky wrote.
Synevo is the largest network of laboratories in Ukraine, part of the Swedish medical holding Medicover. The Synevo network includes 320 laboratory centers operating in 125 settlements of Ukraine, as well as eight laboratories that perform more than 1,000 types of tests.
Every year, the company’s laboratory centers serve more than 4 million customers.

Synevo laboratory, part of the Swedish medical holding Medicover, has invested EUR500,000 in the launch of a new laboratory with a capacity of more than 400,000 tests in Kherson.
According to a press release from Synevo, the new laboratory will be opened on the basis of the Taurt Medical center and will serve both the clients of the clinic and the orders of Synevo’s clients in Kherson region.
In the near future the laboratory plans to fulfill orders for Synevo clients from Mykolaiv, Zaporizhia, Dnipropetrovsk and Donetsk regions.
The laboratory plans to carry out general clinical, biochemical, immunochemical, hematological and cytomorphological studies.
The Synevo laboratory in Kherson is the eighth operating laboratory of the company in Ukraine. Synevo laboratories also operate in Kyiv, Odesa, Kharkiv, Lviv, Vinnytsia, Dnipro, Chernivtsi.
Similarly to other Synevo laboratories, the laboratory in Kherson complies with international standards for laboratory diagnostics and is equipped with automated equipment from leading manufacturers from the United States, Japan, Switzerland, Germany (Zeiss, Roche, Sysmex and others), which performs all stages of research in an automatic mode without human intervention.
Synevo is the largest network of laboratories in Ukraine, part of the Swedish medical holding Medicover. The Synevo network includes 320 laboratory centers operating in 125 settlements of Ukraine, as well as eight laboratories in which more than 1,000 types of tests are performed. 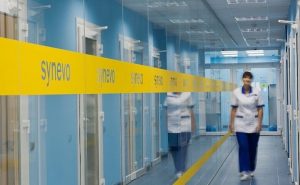 The Synevo medical laboratory chain plans to open 30-40 new points in 2021.
“We continue opening our branches in the regions, and the situation with COVID-19 has not influenced this in any way. In 2021 alone, we plan to open 30-40 new points in Ukraine,” Commercial Director of Synevo Mykola Skavronsky said in an interview with Interfax-Ukraine.
According to him, in big cities Synevo opens branches on its own, in small ones – using franchise agreements, “franchisees open outlets according to our standards.”
He also said that “the main problem of regional development is, oddly enough, the lack of suitable premises.”

According to Synevo’s press release, new PCR tests are carried out on new generation equipment and reagents from the U.S. company Abbott.

Investments in equipment for testing (two analyzers) amounted to more than EUR 200,000.

The tests detect the virus at the earliest stages of the disease, when the virus cells are still very little in the body, while other test systems will still give false negative results, although the person is already sick.

In addition, new PCR tests, in addition to detecting COVID-19, can determine the viral load of SARS-CoV-2 on the body and the likely stage of the disease.

“We have received official confirmation from the head office of Abbott in the United States that new PCR tests detect two new strains of coronavirus: British and South African. These results were obtained by Abbott in clinical trials, and the reagents have already received international FDA accreditation,” Butenko said in a press release.

Synevo said that Abbott’s PCR tests are one of the most reliable in the world, their sensitivity is only 100 copies per 1 ml of biomaterial, while the sensitivity of other PCR tests for COVID-19 available on the Ukrainian market, from 400 copies and higher. This sensitivity allows almost completely eliminate false negative results.

Synevo is Ukraine’s largest network of medical laboratories, a division of the Swedish medical holding Medicover. The Synevo network consists of more than 300 laboratory centers operating in more than 115 cities throughout Ukraine, as well as seven laboratories in which more than 1,500 types of tests are performed. 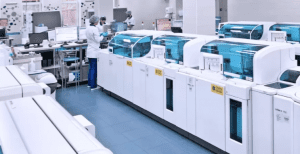 Synevo Laboratory has launched a specialized COVID center in Kyiv to conduct a complex of research on COVID-19, investments in it exceeded EUR 300,000.
According to a press release from the company, the Synevo COVID Center includes a high-tech laboratory for performing COVID-19 tests by PCR, as well as a specially equipped department for customer service and sampling for coronavirus disease research.
“The COVID-19 epidemic is gaining momentum, and the demand for mass testing of the population is growing every day. Given the expected scale of testing, we have decided to open a specialized COVID center with a separate laboratory that will specialize exclusively in PCR testing for COVID-19,” Mykola Butenko, the director for development at Synevo, said.
The company plans to soon launch PCR testing in other branches throughout Ukraine.
“For now, the test can be passed in the COVID center in Kyiv. It is located at 2/58 Pivnichna Street. But, very soon, we plan to launch testing in most branches throughout Ukraine,” press secretary of the company Viktoria Ilinska said on Facebook.
PCR testing for COVID-19 at the Synevo COVID center will be performed using reagents from BAG Diagnostics (Germany).
In addition, from November, Synevo plans to launch tests on automatic equipment and reagents from Abbott (the United States). 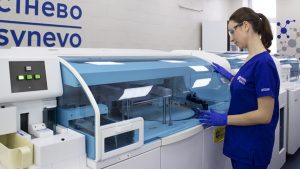