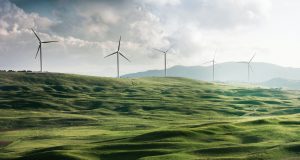 NEW 150 MW WIND FARM TO BE BUILT IN UKRAINE 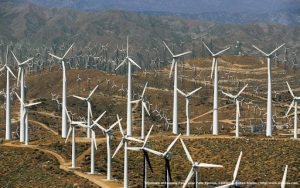 Wind Power GSI Volyn LLC intends to build a wind power plant with a capacity of 150 MW in Ivanychi and Volodymyr-Volynsky districts of Volyn region.
According to the website of the unified register of environmental impact assessment, within the framework of the project, it is planned to install 28 wind turbines in the territory of Ivanychi district and 1 wind facility in the territory of Volodymyr-Volynsky district with a capacity of up to 7 MW each. The tower height is up to 166 meters, the rotor diameter is up to 170 meters.
It is also planned to build a high-voltage substation of 35/110 kV with an area of up to 1 hectare with transformer equipment to ensure the reception and transmission of generated electricity from the station to the network. The transmission of electricity generated at the wind farm to the unified state power grid will be carried out through the existing 330 kV Novovolynsk substation of Ukrenergo.
The wind farm is expected to generate about 540,000 MWh of “green” electricity.
According to the data of the Unified state register of legal entities and individual entrepreneurs, Wind Power GSI Volyn (Lviv) belongs to Greenville closed non-diversified venture corporate investment fund. The ultimate beneficiary is Ivan Torsky, the director general of TKS Development Holding. 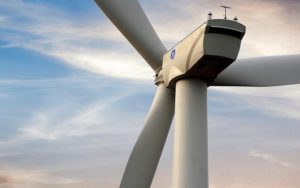 DTEK has completed construction of Prymorska wind farm (Botiyeve, Zaporizhia region) with a capacity of 200 MW, an Interfax-Ukraine correspondent has reported.
DTEK CEO Maksym Tymchenko said that investment in the project reached EUR 321 million, including EUR 180 million are funds borrowed from German banks and secured by foreign export-credit agencies.
Prymorska wind farm will annually generate 700 million kWh of electricity.
The plant consists of two phases 100 MW each and has 52 wind turbines made by General Electric.
During the construction of the second phase Ukrainian contractors received orders for EUR 30 million.
DTEK was established in 2005 to manage the energy assets of the System Capital Management Group (SCM, Donetsk) of Rinat Akhmetov. The functions of strategic management of the enterprises of the group that make up the vertically integrated chain for the extraction and enrichment of coal, production and sale of electricity were delegated the holding.

Simmons & Simmons has advised Oslo-based NBT, a Norwegian wind power developer and the largest foreign investor in Ukraine, by leading the negotiations on the Engineering, Procurement and Construction (“EPC”) contracts with China Electric Power Equipment and Technology Co, Ltd. (“CET”) for the 300 MW second stage and 450 MW third stage of the Zophia Wind Park in Ukraine (“Zophia II” and “Zophia III” respectively).
Once completed, together with the 42.5 MW first stage, the Zophia Wind Park will become the largest onshore wind farm in Europe, with a total capacity of 792.5 MW – and will generate enough electricity to power the needs of approximately 340,000 households.
Simmons also advised NBT on its Preliminary Financing Arrangement Agreement, under which NBT and CET set out their intentions for financing for Zophia II and Zophia III. NBT plans to tap Chinese banks including Industrial Commercial Bank of China (“ICBC”), the Export-Import Bank of China (“Exim Bank of China”) and China Construction Bank (“CCB”) for €500 million of senior debt and arrange an additional €250 million from international banks. This promises to be a landmark Belt and Road project in respect of its combined international and Chinese financing.
The Simmons team was led by projects partner Alex Blomfield and assisted by associates Louise Mackenzie and Elizabeth Ormesher.
Joar Viken, CEO of NBT, said “Alex has been instrumental in all of NBT’s EPC negotiations in Ukraine, both for the Syvash and the Zophia projects. His outstanding work ethic, combined with his commercial savviness and ability to provide creative solutions to complex problems, have been instrumental in closing these EPC contracts. His vast knowledge regarding international project financing has been advantageous in ensuring we negotiate a bankable product. In addition, we are deeply impressed by Simmons and the assistance the supporting staff has been providing throughout the process.”
Commenting on the transaction, Alex Blomfield said: “It is a privilege to advise NBT on such a complex and important deal. NBT is an excellent developer and one of only a handful of sponsors that successfully can combine trusted relationships in China with international financing. Having recently joined Simmons, it is great to be a part of a firm which is so well placed to support companies such as NBT but also other clients on major projects of similar scale and size.”
With a focus on emerging markets, NBT was the first company to close a limited-recourse financing in the fledgling wind power market in China in 2010 and earlier this year NBT, together with its equity partner Total Eren, closed the first limited-recourse financing of a wind farm in Ukraine with the 245.7 MW Syvash project. So far, NBT has commissioned three wind farms, totalling 150 MW of capacity in China. Leveraging the success in China and Ukraine, NBT is continuously assessing project opportunities in other emerging markets.
The Zophia deal is the latest in a line of award-winning wind project deals for the Energy, Natural Resources & Infrastructure Projects team at Simmons, demonstrating its market leading position in landmark transactions such as the Markbygden 650 MW wind farm in Sweden which won European Wind Deal of the Year at Thomson Reuters PFI Europe Awards 2018 and advising on the largest joint venture arrangement between a private equity fund and a developer in Africa (US$1.9bn ) and Chile (US$1.4bn).
Contact
Carl Philip Brandgard, PR Manager: +44 20 7825 4217 CarlPhilip.Brandgard@simmons-simmons.com
Follow Us
http://www.simmons-simmons.com

GURIS FROM TURKEY TO BUILD 80 MW WIND FARM IN UKRAINE 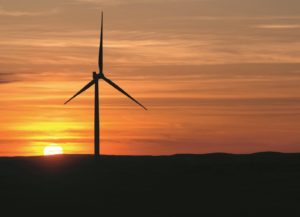 Ovid North LLC intends to build an Ovid North wind farm with a capacity of 80 MW (Ovidiopol district of Odesa region) in the area north of the existing Ovid Wind farm, according to the website of the unified register of environmental impact assessment. Within the project it is planned to build from 12 to 16 wind turbines with a capacity of 3.6 MW to 5.5 MW each. The height of the towers is from 120 meters to 160 meters. The rotor diameter is from 130 meters to 170 meters.

It is expected that the wind farm will generate 230,000 MWh per year.

At first, the holding specialized in the construction of hydropower plants and thermal power plants and built large energy facilities with a total capacity of about 1.7 GW. In 2000, it reoriented to the construction and operation of its own energy facilities using renewable energy sources. As of 2018, the holding’s portfolio included 79 MW of hydroelectric power stations, 162 MW of geothermal stations, and 373 MW of wind farms. 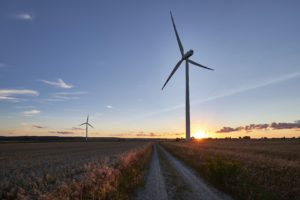