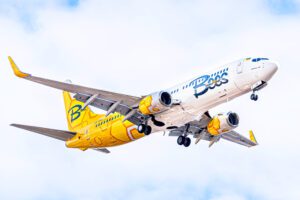 The State Aviation Service of Ukraine has granted the new Ukrainian airline Bees Airline the rights to operate the Kyiv – Lviv – Kyiv, Kyiv – Odesa – Kyiv and Kyiv – Kherson – Kyiv airlines. Order of the State Aviation Service No. 655 dated April 26, 2021 was published on its website.
According to the document, the frequency of these flights and the duration of the rights are not limited.
As reported, the State Aviation Service of Ukraine issued an operator certificate to Bees Airline on March 12, 2021. Later, the regulator allowed the company to operate flights on 31 routes – 15 regular and 16 charter flights.
Bees Airline made its first charter flight from Kyiv to Sharm el-Sheikh (Egypt) by order of the tour operator Tez Tour Ukraine on March 18, 2021.
According to the public register of civil aircraft of Ukraine, Bees Airline registered two aircraft in Ukraine – Boeing 737-800 with registration numbers UR-UBA and UR-UBB. Both aircraft are produced in 2010 and belong to San Clemente Leasing LLC (the United States).
According to Bees Airline CEO Yevhen Khainatsky, by the end of 2021 the fleet will be replenished with two more aircraft. Another two are planned to arrive in 2022.
The base airport of Bees Airline is Kyiv International Airport named after Ihor Sikorsky.
According to the data in the register, the beneficial owners of Bees Airline are Serhiy Smirny (90%) and Khainatsky (10%).
Previously, Khainatsky was CEO of another Ukrainian airline – SkyUp Airlines.