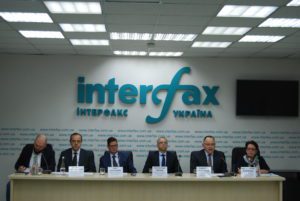 Philip Morris Ukraine, British American Tobacco, JTI and Imperial Tobacco in Ukraine are mulling the possibility of decreasing production and later closing the tobacco factories on the territory of Ukraine over the adoption of the legislative requirement on the government regulation of markup on their goods by the Verkhovna Rada.
“The fact of adoption of this bill will have serious consequences for the industry. This is the absence of a transition period and implementation mechanisms. In the near future, this will expose our business to risks. We will be forced to consider the issue of producing our goods at other factories, since we do not even fully understand how to execute this bill,” Director of British American Tobacco Ukraine Simon Welford said at a press conference at Interfax-Ukraine on Wednesday.
He said that bill 1049, passed at second reading, introducing a single account for paying taxes and duties, the single social security contribution, sets a fixed markup for wholesale and retail traders of tobacco products at 7% and 13% of the maximum retail price per package.
General Manager of Imperial Tobacco in Ukraine Rastislav Cernak said that these legislative initiatives could entail an increase in the volume of illegal trade in tobacco products from 8.4% to 20%. At the same time, he said that over the past three years, the volume of the “shadow” tobacco market has grown by about seven times and this annually cost UAH 5 billion the national budget.
At the same time, Cernak predicted a 25% reduction in cigarette production. “Such a 25% drop, according to our estimates, will cost the national budget about UAH 7 billion. Therefore, we urge the Verkhovna Rada to revise bill No. 1049 and remove the amendment that establishes the regulation of the markup. We request that transparent lawmaking in Ukraine along with an open dialogue with major investors start working, as such significant changes in taxation force us to rethink our business in Ukraine,” he said.