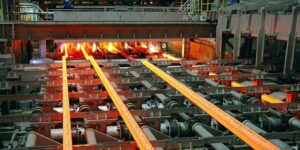 Metinvest, an international vertically integrated mining and metallurgical group of companies, is exploring the possibility, together with Itlay’s Danieli, to build a new rolling mill in Italy.
Metinvest CEO Yuriy Ryzhenkov said at a press conference devoted to the company’s 15th anniversary held in Kyiv on Wednesday that the project involves the construction of a new production facility in Italy, where Ukrainian slabs will be rolled into hot-rolled flat products.
“The Metinvest Group is really exploring the possibility of building a rolling mill in Italy,” Ryzhenkov said.
At the same time, he recalled that the group already has two plants in Italy, where flat-rolled products are produced from Ukrainian slabs. And Metinvest has always noted that this market is interesting and promising for the company.
“But Metinvest has not made a final decision on this project,” the top manager said.
According to him, now the project is at the pre-feasibility stage, negotiations are also underway with the owners of the site, and the construction of a plant is planned.
Metinvest is a vertically integrated group of mining and metallurgical enterprises. Its enterprises are located in Ukraine – in Donetsk, Luhansk, Zaporizhia and Dnipropetrovsk regions, in European countries. In particular, in Bulgaria it has Promet Steel plant with a capacity of 500,000 tonnes of rolled metal per year, in Italy – Metinvest Trametal and Ferriera Valsider with a total annual capacity of 1.2 million tonnes. In the U.K., the company owns Spartan UK plant that is capable to produce 200,000 tonnes of rolled steel annually.
The main shareholders of Metinvest are SCM Group (71.24%) and Smart Holding (23.76%), which jointly manage the company. 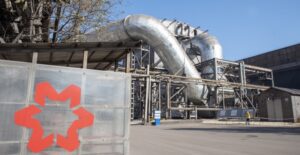 Metinvest, an international vertically integrated mining and metallurgical group of companies, is launching a large-scale project for the construction of a new workshop for the production of cold-rolled steel, galvanized and painted coils at Illich Metallurgical Plant (Donetsk region). According to a company press release, the group signed a contract for the supply of equipment with the world’s leading supplier of metallurgical technologies, Italy’s Danieli, on June 10. The total investment in the project will exceed $1 billion.
At the same time, it is specified that it is planned to build a cold rolling shop at Illich steel mill, which will consist of a continuous cold rolling mill combined with a pickling line, as well as three modern lines for applying zinc, aluminum-zinc and polymer coatings. At the first stage, investments in the project will exceed $800 million.
For the construction of the complex, Metinvest will attract a large foreign contractor with experience of participation in similar projects.
It is planned that in 2025, after the completion of the first stage of the project, the mill will produce about 1.2 million tonnes of highly competitive cold-rolled and galvanized steel, as well as color-coated steel per year. At the same time, the capacity for the production of cold-rolled coils will amount to more than 400,000 tonnes, galvanized coils – over 60,000 tonnes and polymer-coated coils – more than 140,000 tonnes.
Yuriy Ryzhenkov, the Director General of Metinvest, noted that the construction of a cold rolling mill is the company’s most ambitious project for the next five years.
“This is a logical continuation of the program of modernization of rolled steel production at Illich steel plant. The entire new technological chain, including a modern continuous casting machine, a reconstructed 1700 mill and a new cold rolling shop, will allow Metinvest to achieve world-class product quality at all stages of production – from semi-finished products to coated rolled products. The production of premium high-tech goods, the use of advanced technologies, environmental friendliness and the creation of new jobs for qualified specialists – all this makes the project significant for Mariupol, for the industry, and for the whole country,” the top manager said. 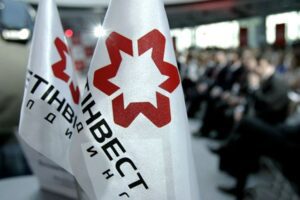 Consolidated revenue of Metinvest B.V. (the Netherlands), the parent company of the international vertically integrated mining and metallurgical group Metinvest, in January-March this year increased by 43% compared to the same period last year, to $3.624 billion.
According to the published preliminary unaudited consolidated results of the company’s financial statements, adjusted EBITDA for the first quarter was $1.462 million, which is 3.92 times higher than in the same period last year ($373 million). The margin was 40% (15% in Q1, 2020).
It is noted that Metinvest’s consolidated revenues rose by 43% which is driven primarily by higher selling prices of steel and iron ore products in line with global benchmarks. In addition, the Group increased sales volumes of flat products by 6% y-o-y, as a result of a recovery in demand in several strategic markets for the Group, as well as recently implemented investments.
Metinvest also boosted pellet shipments by 34% y-o-y, amid higher pellet premiums globally.
During the reporting period, revenues in Ukraine increased by 30% y-o-y, to $947 million. This was mainly due to higher average selling prices of steel and iron ore products, as well as higher sales volumes of iron ore products (up 17%) and coke (up 18%). The share of Ukraine in consolidated revenues edged down by 3 percentage points (p.p.) y-o-y, to 26%.
Sales to other markets increased by 48% y-o-y, to $2.677 million in the first quarter of 2021, accounting for 74% of total revenues. Sales to Europe surged by 54% y-o-y, primarily amid higher steel and iron ore selling prices. In addition, sales volumes of cast iron, flat products and pellets rose by 32%, 28% and 51%, respectively. As a result, the region’s share in overall revenues increased by 3 p.p. y-o-y, to 35%.
Revenues from the Middle East and North Africa (MENA) region rose by 48% y-o-y, mainly amid higher steel selling prices, as well as greater shipments of pig iron (up 29%), slabs (up 73%) and flat products (up 4%). The region’s share in consolidated revenues remained unchanged at 18%.
Sales to Southeast Asia increased by 9% y-o-y, amid higher iron ore selling prices despite practically no shipments of semi-finished and finished steel products to the region. Southeast Asia’s share in consolidated revenues declined by 2 p.p. y-o-y, to 8%.
Revenues from the CIS rose by 20% y-o-y, primarily as a result of higher selling prices for flat products. Meanwhile, the region’s share in consolidated revenues declined by 1 p.p. y-o-y, to 5%.
In the first quarter of this year, consolidated EBITDA was $1.462 billion, which is 3.9 times higher compared to the same period last year. This was primarily driven by an increase in the Mining segment’s contribution of $676 million and in the Metallurgical segment’s contribution of $494 million. In addition, corporate overheads decreased by $2 million, while eliminations increased by $83 million.
The increase in consolidated EBITDA was primarily attributable to higher average selling prices for steel and iron ore products, the effect of which on sales of Metinvest’s goods totaled $778 million. Higher prices also improved earnings from resales (up by $23 million) and the contribution of both joint ventures (up by $216 million).
In the first quarter of this year, the Group’s consolidated EBITDA margin increased by 25 p.p. y-o-y, to 40%. The Metallurgical segment’s EBITDA margin rose by 16 p.p. y-o-y, to 24%, while that of the Mining segment climbed by 38 p.p. y-o-y, to 75%. 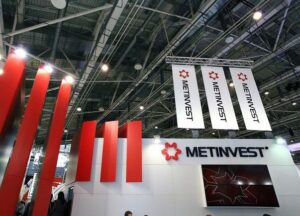 Metinvest B.V. (the Netherlands), the parent company of the Metinvest mining and metallurgical group, in January-March this year reduced capital investments by 1% compared to the same period last year, to $ 147 million from $ 148 million.
The unaudited consolidated financial results for the first quarter of 2021 show that strategic investment declined 37% year-on-year as a result of the ongoing revision of the technology strategy and the completion of some key projects in 2020, while maintenance project investment increased by 32%, which brought its share in total capital investments to 30% and 70%, respectively (47% and 53% in the first quarter of 2020).
At the same time, Metinvest continued to implement the following key strategic projects: the construction of a cyclical flow technology at Pivnichny and Inhulets GOKs (completion of work at both GOKs is expected by the end of 2021), the construction of an air separation unit at Illich Steel Plant (detailed engineering documentation has been completed). Metinvest has also launched a project for thickening waste enrichment at Pivnichny GOK to reduce waste transportation costs and the cost of servicing pumping equipment at slurry pumping stations. The group continued the construction of new block No. 11 at the mine of the recently consolidated Pokrovske mine directorate to maintain production volumes.
“Despite the completion of the main work within the largest environmental project in the history of Ukraine – the reconstruction of the sinter plant at Illich Steel Mill, environmental issues remain a priority for the group,” the report emphasizes.
Thus, other environmental projects in the first quarter of 2021 included the reconstruction of the gas cleaning facilities of the foundry and the bunker rack of blast furnaces No. 4 and No. 5 at Illich Steel Mill, the reconstruction of the gas cleaning system of oxygen converters at Azovstal and the replacement of the gas cleaning equipment of the Lurgi 552-A roasting furnace at Pivnichny GOK.
Metinvest is a vertically integrated group of mining and metallurgical enterprises. The group’s enterprises are located mainly in Donetsk, Luhansk, Zaporizhia and Dnipropetrovsk regions.
The main shareholders of the holding are the SCM Group (71.24%) and Smart-Holding (23.76%), which jointly manage it.
Metinvest Holding LLC is the management company of Metinvest Group.

METINVEST INCREASES EBITDA BY 33% IN FEBRUARY 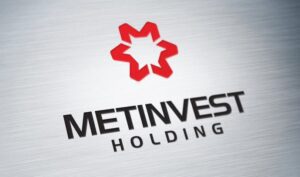 The revenue of Metinvest B.V. (the Netherlands), the parent company of the Metinvest mining and metallurgical group, in February this year increased by 17.9%, or $ 185 million compared to the previous month, to $ 1.216 billion from $ 1.031 billion.
According to the published preliminary unaudited consolidated monthly results of the company’s financial statements, total EBITDA in February was $ 503 million, which is $ 125 million, or 33.1%, higher than in January ($ 378 million), while EBITDA from participation in joint venture amounted to $ 86 million (in January – $ 80 million).
According to the report, the adjusted EBITDA of the metallurgical division of the group for February 2021 amounted to “plus” $ 257 million (in January – “plus” $ 171 million), including $ 21 million from participation in joint venture ($ 13 million), while EBITDA of the mining division – $ 318 million ($ 234 million), including from joint venture – $ 65 million ($ 67 million). The management company spent $ 6 million ($ 7 million).
Total revenue in February consisted of $ 920 million ($ 789 million in January) from the metallurgical division, $ 426 million ($ 329 million) from the mining division, and $ 130 million from intra-group sales ($ 87 million).
The total debt of the company in February increased by $ 83 million compared to January, to $ 3.033 billion from $ 2.950 billion, while the volume of cash increased by $ 61 million, to $ 1.180 billion from $ 1.119 billion.
Funds used in investment activities amounted to $ 201 million, in financial activities – $ 90 million.
Metinvest in February received $ 58 million from the resale of square billets in the amount of 95,000 tonnes. In addition, $ 170 million was received from the resale of 258,000 tonnes of flat products, 47,000 tonnes of long rolled products brought $ 32 million, 89,000 tonnes of pig iron – $ 45 million
The main shareholders of Metinvest are SCM Group (71.24%) and Smart-Holding (23.76%), jointly managing the company.
Metinvest Holding LLC is the management company of Metinvest Group.