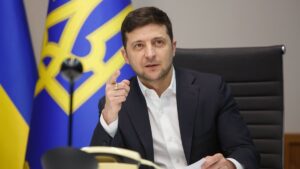 The European Commission (EC) welcomes Ukrainian President Volodymyr Zelensky’s determination to fight the deeply rooted influence of vested oligarchic interests on the country’s life and expects the next steps in this direction.
The European Commission said this to the Interfax-Ukraine agency on Friday commenting the adoption of the law on de-oligarchisation by the Verkhovna Rada.
“We welcome President Zelensky’s determination to address the deeply rooted influence of vested oligarchic interests in the political and economic life of Ukraine,” the European Commission said.
The diplomats in Brussels underscored the adoption of the bill “On the prevention of threats to national security associated with the excessive influence of persons with significant economic or political heft in public life (oligarchs)” at the second reading in the Verkhovna Rada on 23 September. “This is a step forward. We expect the law to be implemented fully and with determination, in a legally sound manner. We believe that in addition to the implementation of the adopted law, more steps are needed, in particular to close Ukraine’s institutional gaps, to achieve the desired de-oligarchizing effect,” they noted.
At the same time the European Commission stressed that Ukraine “invested a lot of efforts into closing the space for corrupt practicing, by i.a. cleaning the banking sector and ensuring transparency of the public procurement.” “We encourage to continue these efforts in others sectors prone to corrupt practices,” the diplomats said.
They are convinced that “strengthening of planned and existing institutions (such as the rule of law authorities, including the court system; the Anti-Monopoly Committee; the public broadcaster; an independent press regulator among others) should stand at the heart of this fight to consolidate the rule of law, shore up the trust of Ukrainian citizens in public institutions and, not least, to unleash Ukraine’s economic potential for the benefit of all people of Ukraine.”

PRESIDENT OF UKRAINE: UKRAINE IS OPEN FOR BIG BUSINESS, BUT NOT FOR OLIGARCHS

President of Ukraine Volodymyr Zelensky welcomes the adoption of the law on de-oligarchization by the Verkhovna Rada. “I welcome the adoption by parliament of my bill on deoligarchization No. 5599! Ukraine is open for big business, but not for oligarchic influence on officials, politicians and the media. Today we took another step towards getting rid of it. Thanks to all the MPs for their support!” the head of state wrote on Twitter on Thursday.
Later Zelensky said in his Telegram channel that “thanks to the anti-oligarchic law, Ukraine gets a historical chance to build civilized and clean relations between big business and the state.” Yes, many politicians do not like this. Yes, they want to live as they used to, working for the oligarchs. Yes, there was a lot of pressure on our MPs, a lot of intrigues and even blackmail. But the law was passed. I am grateful to every MP who supported this law,” he wrote.
According to the head of state, there will no longer be an oligarchic branch of government in Ukraine. “Legislative, executive and judicial – yes. But for the oligarchs there is only one way – to become a pure business,” the president said.
Zelensky thanked the MPs of Ukraine for supporting the bill, calling the voting results “the right signal.”

MONITORING SYSTEM WILL INCLUDE ALL INFO ABOUT OLIGARCHS 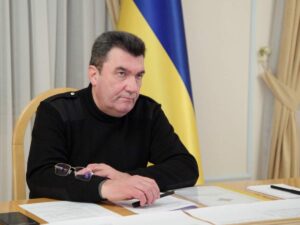 The monitoring system will include all the information about the oligarchs if the law is passed by parliamentarians, Secretary of the National Security and Defense Council (NSDC) Oleksiy Danilov has stated.
“It [the system of monitoring oligarchs] is ready to work if [the law] is adopted by the parliamentarians. It has a high level of security. It is quite complex and combines all the information about all these people, their welfare, what they did, where they have taken everything. And then it will be clear who and where came from,” Danilov said on the air of Savik Shuster’s Freedom of Speech program on the Ukraina 24 TV Channel on Friday evening. 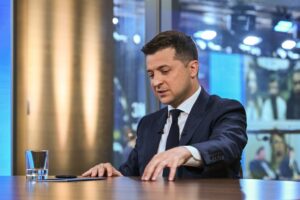 On Tuesday, June 15, President of Ukraine Volodymyr Zelensky and Prime Minister Denys Shmyhal will take part in the “Ukraine 30. Economy without oligarchs” All-Ukrainian Forum, which will be held in Kyiv on June 14 to June 16.
According to the forum’s program, the opening of the Ukraine 30. Economy without oligarchs All-Ukrainian Forum is scheduled for Monday, June 14, with the participation of Prime Minister Shmyhal at 10:30.
On Tuesday, June 15, President Volodymyr Zelensky will speak at 10:30, and Prime Minister Shmyhal will speak at 10:40.
On Wednesday, June 16, the third day of the forum will be opened by Head of the State Property Fund Dmytro Sennychenko. 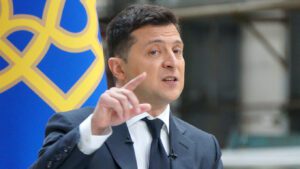 President of Ukraine Volodymyr Zelensky has proposed that public servants are obliged to submit a declaration about contacts with oligarchs included in the relevant register.
According to president’s bill No. 5599 on the prevention of threats to national security associated with the excessive influence of persons with significant economic or political weight in public life (oligarchs), a public servant, after contacting an oligarch or his representative, must fill out a declaration of contacts on the official website of the National Security and Defense Council of Ukraine.
According to the bill, a contact is a meeting and conversation, including online meetings and conversation, about anything.
At the same time, persons included in the register and their representatives are obliged to inform public officials about the fact that information about themselves or the persons they represent has been included in the register before the meeting or a conversation.
The obligation to submit a declaration of contacts applies to the President of Ukraine, the Chairman of the Verkhovna Rada, his deputies, MPs, the prime minister and deputy prime ministers, the minister and his deputies, the head of the SBU and his deputies, the prosecutor general and his deputies, the governor of the National Bank and his deputies.
The declaration of contacts is also required to be filled out by judges of the Constitutional Court, judges, the head of a permanent subsidiary body created by the president and his deputies, chairmen and members of the National Council on Television and Radio Broadcasting, the Antimonopoly Committee, the Accounting Chamber, the Central Election Commission, the High Council of Justice and other state collegial bodies.
Among the officials required to submit a declaration of contacts are the secretary of the National Security and Defense Council and his deputies, the heads of the State Property Fund, the National Agency on Corruption Prevention and their deputies, directors of the National Anti-Corruption Bureau of Ukraine, the State Bureau of Investigations, Bureau of Economic Security and their deputies.
In addition, among the declarants are the Verkhovna Rada commissioner for human rights; civil servants holding civil service positions of A category; heads of local state administrations, their first deputies and deputies; servicemen of the Armed Forces of Ukraine and other military formations who have been awarded the highest military rank; persons of the commanding staff of law enforcement agencies and employees of other bodies who have been awarded the highest special rank.
According to the bill, violation of the obligation to submit a declaration of contacts is the basis for bringing a person to political or disciplinary responsibility.
The declaration of contacts shall contain information about the persons who submitted the information, about the oligarchs included in the register and their representatives, with whom there was contact, the date and place of the conversation and its brief content.
The transitional provisions to the bill indicate that the law will be limited to 10 years. Also, according to the transitional provisions, the Cabinet of Ministers shall, within three months, bring its regulations in line with the law after its entry into force, as well as ensure that ministries and other central executive bodies bring their regulations in line with the law.

FIFTH PRESIDENT OF UKRAINE POROSHENKO COULD ENTER REGISTER OF OLIGARCHS 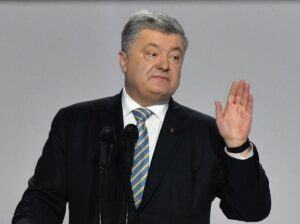 Businessman Ihor Kolomoisky and the fifth president of Ukraine, leader of the European Solidarity party, MP Petro Poroshenko meet the criteria under which they are included in the register of oligarchs provided for by the president’s bill on de-oligarchization, Justice Minister Denys Maliuska has said.
“There are official partners of Mr. Kolomoisky in the Verkhovna Rada, and he is not alone, therefore Mr. Kolomoisky definitely could be included [in the register of oligarchs] European Solidarity understands that their leader [Petro Poroshenko] also automatically falls into the register,” Maliuska said on the air of Savik Shuster’s Freedom of Speech program on Ukraina TV channel on Friday.
As reported, President of Ukraine Volodymyr Zelensky this week submitted a bill on the prevention of threats to national security associated with the excessive influence of persons with significant economic or political weight in public life (oligarchs) (No. 5599) to the Verkhova Rada.
According to the document, any three of four conditions are sufficient for the National Security and Defense Council to include a person in the register of oligarchs: significant influence on the media, participation in political life, beneficial ownership of a monopoly company and a fortune equaling over 1 million living wages (about $83 million at the current exchange rate).