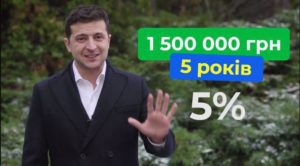 Ukrainian President Volodymyr Zelensky has announced a launch of the new state program dubbed “Come Back and Stay.”
“Dear Ukrainians, I said during my swearing-in ceremony that there are 65 million of us Ukrainians across the globe, and our country badly needs you, your knowledge, your talents and mental values. We very much want you to come home. We also want to see those who have unfortunately given up in despair and are planning to leave Ukraine stay here,” Zelensky said in a video address on his Facebook page on Tuesday.
Affordable loans for those who wish to start or expand their own business will be the first step under this program, the Ukrainian president said.
“The loan amount will be UAH 1.5 million for five years. There will be the following interest rates: 5% for an existing or new business that will create at least two jobs, 7% for a new or existing business with revenues below UAH 25 million that creates no jobs, but if you hire a new employee, the rate will be cut by 0.5% with every new worker hired; and 9% for anyone presently working with revenues from UAH 25 to UAH 50 million, who wishes to expand their business,” Zelensky said.
Detailed information about conditions and mechanisms to facilitate the program and about its further stages will be available soon, he said.
“We have a lot more interesting ideas. If you’ve been dreaming of opening your own coffee shop, or car service, or barber shop, or wishing to expand your convenience store, cheese dairy or furniture factory, basically, any kind of business, please do come back and stay […] Let’s build a successful and flourishing Ukraine. And let’s do it together!” Zelensky said.
Zelensky, who took office of Ukrainian president on May 20 this year, promised Ukrainian citizenship to all ethnic Ukrainians across the globe willing to work for the benefit of the nation.

GERMAN-UKRAINIAN FUND TO LAUNCH EUR9.5 MLN PROGRAM OF SUPPORT FOR SMES IN DONBAS 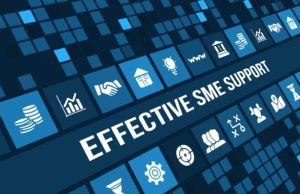 In November, the German-Ukrainian Fund (GUF) will present a new FinancEast program to support micro–, small and medium-sized enterprises (MSMEs) in the government-controlled territories of Donetsk and Luhansk regions, under which it is planned to reimburse up to 50% of the cost of investment projects of enterprises, GUF Executive Director Valeriy Mayboroda has said.
“This program is also co-financed by the EU and its amount is EUR9.5 million,” Country Manager to Ukraine of the KfW Development Bank Kurt Strasser said at a GUF press event in Kyiv on Wednesday.
According to him, these will be subsidies to help medium- and small-sized enterprises that lack access to money over the difficult economic situation, as well as those who are located in the Donbas region.
The FinancEast program is co-financed by the EU through KfW, the GUF Executive Director said.
“The stage of the finalization of contracts and operational guidelines is nearing completion, and from November we will begin the active phase of its implementation,” Mayboroda said.
FinancEast materials indicate that investment projects for MSMEs are medium- and long-term ones for more than 12 months that are related to the purchase, modernization or reconstruction of fixed assets. Under an investment project, financing of current assets up to 20% of its value is allowed.
In 2019, the assets of a current program for lending SMEs in the national currency, which is designed until 2030, grew to EUR14.7 million, or 47%, since the launch of the project in 2017. This program is implemented by the GUF and financed by KfW and the EU.
Since the beginning of the project, 217 enterprises have been funded for a total of about UAH 710 million with an initial budget of the program being UAH 370 million. The average rate is 15.5% per annum. According to Mayboroda, the financial resource of the program was used twice due to the reuse of returned loans.
Partners under the GUF’s program are Kredobank, Ukrgasbank, ProCredit Bank and Bank Lviv. The GUF’s Executive Director said that negotiations with CreditWest Bank were also ongoing on its joining the program. 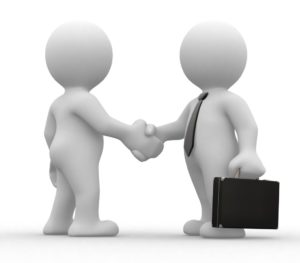 Deputy Minister of Economic Development, Trade and Agriculture – Trade Representative of Ukraine Taras Kachka and Director General of the World Intellectual Property Organization (WIPO) Francis Gurry discussed bilateral cooperation in the field of intellectual property and signed a Cooperation Program for 2020-2021.
According to a message on the ministry’s website, the parties also signed a memorandum of cooperation, which, in particular, provides for the establishment of a National Intellectual Property Center in Ukraine.
“We plan to create a National Center for Intellectual Property according to the methodology of the World Intellectual Property Organization, as well as to develop a network of Technology and Innovation Support Centers. In the future, Ukraine will join the WIPO-administered Marrakesh Treaty to Facilitate Access to Published Works,” the ministry quoted Taras Kachka as saying. 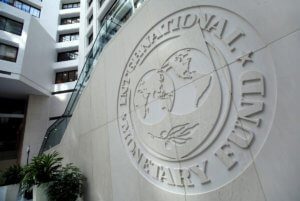 The amount of the first tranche under the new Stand-By Arrangement (SBA) with the International Monetary Fund (IMF) could be $1.5-1.9 billion, First Deputy Governor of the National Bank of Ukraine (NBU) Kateryna Rozhkova has said. “We recently had a monetary briefing where the NBU Governor Yakiv Smolii said that the tranche could be received by the end of this year. As for the sum [of the first tranche], I think that it would be some $1.5-1.9 billion,” she told reporters at the BEPSinUA forum in Kyiv on Thursday.
As reported, the International Monetary Fund (IMF) staff and Ukraine have reached an agreement on economic policies for a new 14-month Stand-By Arrangement (SBA), which will replace the arrangement under the Extended Fund Facility (EFF), approved in March 2015 and set to expire in March 2019.
The agreement is subject to approval by the fund’s management and approval by its board of directors. The board’s meeting is expected to take place at the end of the year after the Verkhovna Rada adopts the national budget for 2019 in accordance with the recommendations of the IMF and the increase in gas and heating tariffs for households, reflecting market trends while maintaining support for low-income consumers. 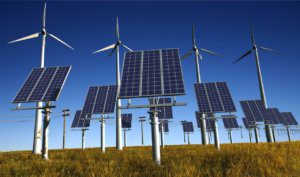 The European Bank for Reconstruction and Development (EBRD) has approved a new program USELF III (Ukraine Sustainable Energy Lending Facility) worth EUR 250 million to support private projects in renewable energy in Ukraine. EBRD Senior Adviser for External Relations Anton Usov told Interfax-Ukraine the board of directors made the corresponding decision at a meeting on July 18. The bank said it has been supporting the development of renewable energy in Ukraine within the framework of the USELF program since 2009, but it expires on June 30, 2018, and USELF III should replace it.
During the first program, the bank financed projects for total of more than EUR 100 million to fund projects with a total capacity of over 150 MW of various renewable energy technologies, the document says. The EBRD notes that as a result of the development of the renewable energy sector, interest from large international developers is growing, and they are ready to implement larger projects in the field of renewable energy.
The bank also says that despite the significant growth of the sector in Ukraine, its share remains insignificant at 1.5%, while the National Action Plan for Renewable Energy envisages the increase of this share to 11% by 2020. 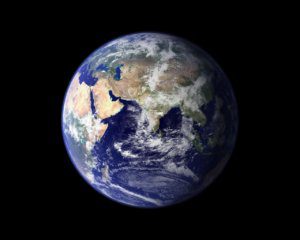 Former head of the State Space Agency of Ukraine (SSAU) Yuriy Alekseyev (2005-2014) has concerns about the current national policy in the space industry and the absence of the state program to maintain and develop the sector. “On the eve of Cosmonautics Day, I learned that the Ukrainian space agency has neither the concept of the industry nor the action plan for the near future, which is a very bad trend. It means that we do not need anyone as the industry and we are not interesting for the government in solving national tasks and problems. Despite the fact that many words and good intentions about the revival of the former glory and power of the Ukrainian space were mentioned during the appointment of the new head of the SSAU,” the former SSAU head said in an article posted on the website of the nongovernmental organization Space Initiatives Center (SIC).
“Forty years of work in the aerospace industry of the Soviet Union and the state of Ukraine allow me to think so and speak. From the very first days of Ukraine’s independence, the then leaders of the state thought and cared about people and enterprises that had never been controlled by Kyiv. L.Kravchuk, V.Masol, L.Kuchma, V.Pustovoitenko, O.Kuzmuk, P.Hermanchuk and many others understood that this is the intellect of science, both among scientists and engineers, and among the working class. We got an opportunity to work actively and contact with the leading aerospace enterprises and agencies around the world,” he said.
Alekseyev said that the history of the formation of the space industry of independent Ukraine was not easy, and included both successes and losses. Among them is the disruption of plans for cooperation with the United States on the launch of low-Earth orbiting satellites with the help of the Zenit-2 launch vehicle (LV) designed and produced in Ukraine under the Irridium program and the successful implementation of a large-scale international project on the commercial launches of satellites from the Sea Launch pad using the same Zenit LV.
“We made more than 30 successful launches, but at the same time there were failures and partially fulfilled tasks. Ukraine earned about $1 billion through Pivdenmash and Pivdenne [Design Bureau] thanks to the Sea Launch company,” he said.
According to Alekseyev, the work done by the industry enterprises in the field of satellite systems creation contributes to the successes of Ukraine. This is the creation of the Earth remote sensing satellite for Egypt following the international tender that was launched in 2007 by the EgyptSat spacecraft and the creation and launch of its own Sich-2 satellite with a target resolution of 2.5 meters in 2011. These works on EgyptSat and Sich-2 showed the world that Ukraine is able to design, manufacture, prepare for launch and operate spacecraft. The volume of its own work in the creation of these devices and ground infrastructure reached 75-80%,” the ex-head of the SSAU said.
“But this is all in the past. The last years of leapfrog and the replacement of the agency’s directors [SSAU], four in three years, have led to the fact that the industry stands on the verge of collapse,” Alekseyev said.
Thus, the ex-head of the SSAU criticized “the loud statements of some heads of space enterprises and agencies at briefings and press conferences in Canada and Japan on the construction of launching sites in Canada, then in Scotland, then in Australia,” which, he said, do not do honor to the State Space Agency of Ukraine and the leadership of the country.
At the same time, Alekseyev connects his hopes for positive changes in the space industry with 2019.
“I hope that the year 2019, the year of the 75th anniversary of Pivdenmash, will be the year of the revival of Sea Launch’s launches, the year of completion of the work on the creation of a Ukrainian war missile,” he said.