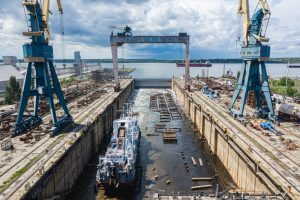 Ocean Shipyard (Mykolaiv) will increase production volumes and intend to take a leading position in the industry, the plant’s owner Vasyl Kapatsyna has said.
“Last year, we finally defended the legal right to Ocean Shipyard. We revived production and diversified our activities in order to maintain the main profile of the enterprise, jobs and modernize technologies. Today I set new tasks for the Ocean Shipyard’s team, namely, increasing production volumes and return of the leading position in the industry,” Kapatsyna said on Facebook.
According to him, a new governing agency has been created at Ocean Shipyard, a supervisory board, which is entrusted with the tasks of strategic planning, the development of international relations, raising investments, as well as partnership programs. Viktor Tsoklan was appointed as head of the supervisory board. In the near future, the supervisory board will focus on development strategies, foreign economic activity, and ensuring public-private partnerships in the defense industry.
“I am also pleased to say that Serhiy Hursky, a shipbuilder of a new generation, has been appointed as Director General of Ocean Shipyard. I believe that the experience and energy of Serhiy Vasyliovych will return Ocean Shipyard to leading positions. I remain the main investor of Ocean Shipyard, the largest shipbuilding enterprise in Ukraine,” Kapatsyna said.
Mykolaiv Shipyard Ocean PJSC (until April 2011 – Vadan Yards Ocean, until December 2008 – Damen Shipyards Okean, until February 2001 – Shipyard Ocean) specialized in the production and repair of container ships, tankers, tugs, barges with a displacement of up to 350,000 tonnes. 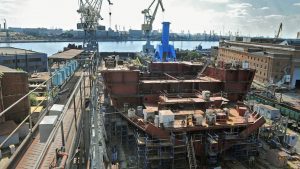 The industrial community of Ukraine is against ordering 16 modern Mark VI patrol boats and the equipment they need for $600 million from the United States, the press service of the Ukrainian League of Industrialists and Entrepreneurs (ULIE) has said.
“The main duty of the authorities is to take care of the economic development of their own country, filling their own state budget, creating jobs at home. The orders in question only contribute to the growth of foreign budgets and stabilize the situation with employment in other states and do not help overcome crisis in our country. This is unacceptable and irresponsible,” the ULIE President, the chairman of the Anti-Crisis Council of Public Organizations, Anatoliy Kinakh, said.
In addition to ordering boats, industrialists pay attention to the purchase of imported locomotives and helicopters, which, in their opinion, could threaten serious socio-economic consequences for the whole country.
Kinakh emphasized that Ukraine has its own shipbuilding industry – highly professional production facilities, including in Mykolaiv, which are capable of building modern military boats and other small tonnage ships with a certain modernization.
“At this difficult time, the responsible government must develop both a national strategy for industrial and innovative development, and separate programs for shipbuilding, other priority areas of industry, to use all the levers to support the complex high-tech industry, starting from manufacturers’ access to credit resources, mitigating fiscal burden, changes in public procurement that would allow attracting public finances to load national producers,” he said. 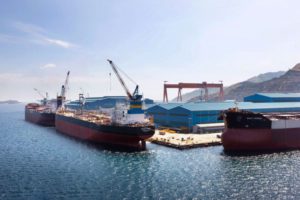 Ukrainian President Volodymyr Zelensky believes that Ukraine can build warships on its own, and not just order them abroad.
At a press briefing in Ochakiv on Wednesday night following the examination of three warships returned by Russia, the head of state told reporters that a contract between Ukraine and France on the production of a batch of patrol vessels and technical support services for them is important to Ukraine, however support for domestic shipbuilding should be a priority.
“I’ll be honest, this contract was prepared before my presidency. Today I support this contract. Anyway, our own production is more important to us, [we should] support Mykolaiv and the region so that professionals, who have left because nothing had been constructed here for many years, return home,” the president said.
Zelensky added that Ukrainian Navy Commander Ihor Voronchenko presented him a shipbuilding development strategy.
“We are planning to build corvettes. We have a plan, although you know that any plan should have a real deadline and be supported by the budget,” he said.
In turn, Voronchenko recalled that Ukraine is planning to build four corvettes by 2028.
As reported, a new version of the Corvette State Program approved by the government in November 2017 provides for the construction of four corvettes for the Ukrainian Navy by 2028. The construction of the lead ship will be finished in 2022.

SHIPBUILDING IN UKRAINE HAS GOOD DEVELOPMENT PROSPECTS, BUT DIFFICULTIES WITH STAFF 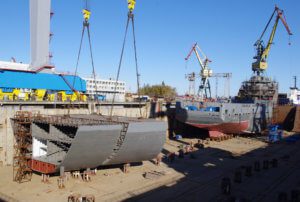 The shipbuilding and ship repair industries of Ukraine have good prospects for development due to cheaper metal, labor and electricity. “Of course, in order to develop shipbuilding, we need investments. It is difficult to assess the volume of such investments now. In any case, it is not about ten million dollars. At the same time, we see interest in shipbuilding and developing the industry in our country. The fact is that despite military actions in the east of the country, we have the cheapest metal in the region if to compare with Turkey or Romania, which are the closest competitors of Ukrainian shipbuilders and ship repairmen,” chairman of the Verkhovna Rada subcommittee for maritime and river transport Oleksandr Urbansky said in an exclusive interview with Interfax-Ukraine.
At the same time, he noted that the cheapness of workforce has the opposite effect: young professionals leave the country.
He added that the factories now need resources that would allow them to raise wages of such employees by $300-400, which would make labor migration unprofitable. At the same time, enterprises are ready to invest in the training and development of even very young specialists. But business also expects actions from the state. First of all, the matter concerns relevant amendments in the legislation.
The expert stressed that the adoption of the draft law on inland water transport will become a catalyst for the development of shipbuilding in Ukraine.