TOURISM INDUSTRY OF UKRAINE LOSES ABOUT UAH 60 BLN IN 2020 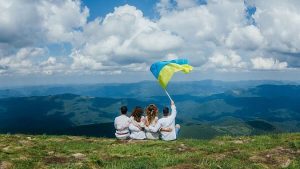 The tourism industry of Ukraine in 2020 saw about UAH 60 billion damage due to the coronavirus pandemic.
“The demand is lower today and the damage to the market has been significant. If in the world the losses of the tourism industry amounted to about $ 800 billion, then in Ukraine, according to our calculations, about UAH 60 billion. This is the damage that the industry saw in 2020,” the head of the State Agency of Tourism Development in Ukraine, Maryana Oleskiv, said during a press conference on assessing the impact of COVID-19 on the hotel industry in Ukraine.
At the same time, she clarified that the agency plans to publish the detailed results of the industry in 2020 in early February.
At the same time, there is still no detailed statistical data on the tourism market and its participants in Ukraine, Oleskiv said.
“For the state agency, this will be one of the priorities in the next [2021] year. In the budget that we have, which is UAH 100 million, we plan to use a significant share of funding to create a unified tourism register, where all accommodation facilities and tourist activity subjects can register and receive operational statistics at least monthly,” the expert said.

During his working visit to Spain, Minister of Foreign Affairs of Ukraine Dmytro Kuleba has discussed with Secretary General of the UN World Tourism Organization Zurab Pololikashvili the prospects for Ukraine’s interaction with the Organization, involving the organization’s mechanisms in the development of the tourism industry in Ukraine.
“They paid main attention to the consequences of the COVID-19 pandemic for the tourism industry, its adaptation to new realities. Kuleba noted that the pandemic has not only obvious negative consequences for tourism, but also unexpected new opportunities. In particular, in Ukraine, such circumstances gave impetus for domestic tourism, aroused people’s interest in traveling inside their own country,” the press service of the Ukrainian Foreign Ministry said on Friday morning.
Pololikashvili noted that now this trend is observed everywhere, and the organization sees in it new opportunities for the global development of domestic and rural tourism.
The head of the Ministry of Foreign Affairs of Ukraine proposed to hold an international tourism forum of the World Tourism Organization in Ukraine, dedicated, in particular, to the topic of domestic and green tourism in the countries of the world.
“I have no doubt that Ukraine will become a new territory on the map of world tourism, which foreigners will be happy to discover for themselves as something new. The development of domestic tourism is a priority of President Volodymyr Zelensky and the government of Ukraine. I want us to join forces on the WTO to achieve this goals,” said the minister.
According to Kuleba, it is worthwhile, without waiting for the end of the pandemic, to actively seek new forms and methods of tourism development, given the importance of the tourism industry for the world economy.
The Minister invited the Secretary General of the UN World Tourism Organization to pay a visit to Ukraine.

REPRESENTATIVES OF TOURISM INDUSTRY APPEAL TO PRESIDENT OF UKRAINE FOR HELP

Representatives of the tourism industry have appealed to President of Ukraine Volodymyr Zelensky, the government and the profile committees of the Verkhovna Rada with the request to create an anti-crisis committee with the participation of tour operators and to facilitate the mirror opening of borders with other countries, the press service of the Ukrainian League of Industrialists and Entrepreneurs (ULIE) has said.
According to the appeal, the tour operators demand negotiations between the Foreign Ministry and the countries that have opened borders for other countries, excluding Ukraine, as well as the introduction of mirror and simultaneous opening of borders with them.
The representatives of the industry insist that inbound and outbound tourism should receive equal support from the state.
“Designate professionals who will understand the difference between inbound, outbound and domestic tourism. These are concepts that cannot be interchangeable. Why are anti-crisis steps today are taken in the format of replacing outbound tourism with inbound tourism? This is not a way out of the crisis for the industry, but only a substitution of concepts, which will lead to even greater decline,” the appeal states.
According to the tour operators, more than 250,000 people work in the industry, and during quarantine thousands lost their jobs. In addition, travel companies incur losses due to penalties for the return of paid and unused tours. At the same time, the industry representatives emphasized that they do not require financial subsidies or provision of jobs.
The appeal was prepared by representatives of the tourism industry together with the anti-crisis council of public organizations and the ULIE.

PRESIDENT OF UKRAINE INVITES FOREIGN INVESTORS TO INVEST IN ENERGY, INFRASTRUCTURE, TOURISM, IT UNDER PERSONAL GUARANTEES

President of Ukraine Volodymyr Zelensky has called on international business to invest in Ukraine and presented a number of promising projects.
“We have a number of projects to which I, under my personal guarantees, the guarantees of protection, invite foreign businesses. These are energy, infrastructure, transparent land circulation,” he said at the 16th Annual Meeting of the Yalta European Strategy (YES) in Kyiv.
In particular, Zelensky presented a project on land irrigation in the southern regions of the country, an inter-university IT cluster in Kharkiv, a film production center in Kyiv, a new resort on the Black Sea coast in a completely new city, ski resorts in Slavske and Borzhava, the development of Khortytsia island, a large-scale entertainment park for guests from Eastern and Central Europe.
“This is not a complete list of reasons why we invite you to invest in Ukraine,” the president added.