A delegation of the Ukrainian League of Industrialists and Entrepreneurs (ULIE) and the Association of Small Cities of Ukraine traveled to Lithuania at the end of April to demonstrate to Ukrainian town mayors how autonomous utility, water purification, wastewater treatment, and electricity supply systems could work efficiently in towns, as well as to establish direct business and cultural contacts. The trip was organized with the assistance of the Lithuanian company Traidenis, whose core business is the production of wastewater treatment equipment, the ULIE, and its member – Ukrainian company Elektromekhanika.

“We’ve noticed an interesting thing – Ukrainian towns rather than cities are more open to high technologies. For this reason we’ve decided to organize a trip to Lithuania to exchange experience, exactly for the representatives of the Association of Small Cities of Ukraine. Thus, eight town mayors joined us to visit the production facilities of Precizika Company, a producer of photovoltaic systems. Traidenis Company took our delegation to Druskininkai, a resort town where its wastewater treatment plants operate,” First Deputy President of the ULIE Serhiy Prokhorov said.

Ukrainian Ambassador to Lithuania Valeriy Zhovtenko welcomed the Ukrainian delegation at the airport and held a meeting with entrepreneurs. Among other issues the participants in the meeting discussed local government issues and the opportunity to share relevant experience between Ukraine and Lithuania. The ambassador briefed the entrepreneurs on the steps required to implement local government reform in Lithuania and told them about the country’s historic experience of struggling for its own independence. Zhovtenko noted the ULIE’s important role in the introduction of European values in Ukraine and in promoting the country’s business interests abroad, specifically in Europe.

The delegations of the ULIE and the Association of Small Cities of Ukraine also visited the production facilities of the Lithuanian company Precizika, a manufacturer of solar panels. The electricity supply to places such as parks, water reservoirs, places of public amusement, small outlets, kiosks, filling stations, sparsely populated districts, etc. is a topical problem in towns. The delegates familiarized themselves with the effective use of photovoltaic modules and the technologies that are used to build small power plants and equip some buildings and transport vehicles.

“Lithuanian engineers have developed unique systems which can illuminate any place without wires, posts and relevant certificates. These are designs of the future which make it possible to not only turn roofs but also walls and slab panels into integrated photovoltaic power systems. Precizika also has technologies that turn absolutely transparent windows into power sources by mounting photocells in the glass units. They also regulate light intensity in the premises,” the ULIE first deputy president said.

Precizika products raised great interest among the Ukrainian mayors as the development of the localities they are responsible for requires such systems.

The Ukrainian delegates also gained new experience during their visit to Alytus Industrial Park, for instance, in tax incentives – the companies that rent new land plots here and have invested at least EUR 1 million per hectare in construction and buildings are exempt from taxes on land rent and real estate for three tax periods, and their taxes are halved during the next five tax periods. Interestingly, Alytus is open for all investment projects related to the production of wastewater treatment systems, storage and logistics development.

There is room for Ukrainian enterprises here, Prokhorov said during the visit to the industrial park.

The delegates also met with Alytus Mayor Vytautas Grigaravicius to discuss business issues as well as possible strengthening of cultural and twin town relations between Ukrainian and Lithuanian towns. For example, Alytus will mark Town Day on June 19, and the mayor of Trostianets, a Ukrainian town, has promised to engage Ukrainian folk music bands and craftsmen in the celebration.

“We think that the implementation of the so-called people’s diplomacy, when people who realize new progressive ideas and technologies cooperate and share experience, is an important aspect of cooperation between the two countries,” Prokhorov said.

The Ukrainian delegates also traveled to the resort town of Druskininkai, which Lithuanians describe as a champion in attracting investment. Some time ago it was a desolate town with a high unemployment rate, however today it is one of the most well-known resorts in Europe. The mayor of the Ukrainian town Myrhorod took great interest in the town’s experience of recreation area development. Particular attention was paid to the wastewater treatment systems used in the town as it is an extremely important issue for resorts.

“They have showcased us the work of Traidenis wastewater treatment plants which effectively eliminate problems related to sewage treatment. I think we will start using such systems in Ukraine soon as they operate in line with European standards, take up minimum space and are hidden so that they don’t spoil the landscape. It is an irreplaceable invention and our resorts and recreation areas lack this. That is why the mayors of Ukrainian towns found this technology interesting. The ULIE promotes advanced ideas in Ukraine in order to realize its mission – progressive development and European integration of the country,” Prokhorov said.

We want to stress that Ukraine’s economic and political integration in the European Union (EU) and the establishment of a free trade area (FTA) as of January 1, 2016, is inevitable and we support it, as does the entirety of the civil and business community of Ukraine, President of the Ukrainian League of Industrialists and Entrepreneurs (ULIE) Anatoliy Kinakh said during the European Business Summit in Brussels on May 7, 2015.

“The EU has become the main strategic partner of our country in 2014. Numbers speak louder than words – our exports to EU countries account for 36% now, and the share of EU investment in Ukraine is 70%! Closer cooperation with Europe is a chance to speed up the introduction of high standards in Ukraine. In addition, cooperation with the EU has to gain new, far from formalized quality so as to rely on the strength, opinion and opportunities of Ukrainian civil society in the future,” the ULIE president said.

During the summit, Kinakh participated in a discussion panel entitled “Trade – Europe in the Global Economy” in order to speak about the key positions of the Ukrainian business community regarding Ukraine-EU cooperation.

“Our goal is to deepen cooperation with the BUSINESSEUROPE organization, the European Parliament, and the European Commission and accelerate the implementation of Ukrainian-EU economic cooperation bearing huge potential. We appreciate Europe’s assistance, but Ukraine has to take the first decisive step on its own – introduce global reforms, improve the work of all branches of the government, and strengthen the role of civil society. This is our own homework task which we have to fulfill,” Kinakh said.

Ukraine is currently suffering from treacherous aggression by its closest neighbor – Russia – which was a good economic partner in the past. Our country’s resources are gradually being exhausted and our main weapons are implemented reforms, economic growth, consolidation of civil society and the strong support of our international partners, namely the EU.

In his speech, the Ukrainian public figure thanked Ukraine’s partners and stressed that the speedy ratification of the Association Agreement is very important to Ukraine.

“January 1, 2016. We are getting closer to this date day by day and this stimulates Ukrainian businesses to develop, advance, search for ways to become modernized, and look for new markets, partners and proposals. We must not take a step back. Ukraine has been paying a too high price after it once rescheduled this date,” the ULIE president said.

Kinakh stressed that intense cooperation between the Ukrainian government, civil society and Ukraine’s European partners on serious programs aimed at adapting the country’s economy to EU norms and standards, boosting its competitiveness and implementing government reforms is very important. The simultaneous introduction of the free trade area and the ratification of the agreement between Ukraine and EU member states could be the best stimulus for the country, Kinakh said.

The ULIE is working to deepen cooperation with the European Economic and Social Committee. Both parties have agreed to hold joint events in the EU and Ukraine in order to strengthen the dialogue between industrialists, employers, and trade unions, as well as Ukrainian and European government agencies.

“In order not to waste time, we are enhancing the competitiveness of Ukraine’s economy so as to safeguard it against turning into a mere supplier of raw materials and exporter of low-cost labor and ‘brains’ to developed countries. Our country can and will produce high-tech and high value added products that are in demand all over the world. Today I can see that our European partners seriously support us,” Kinakh said. 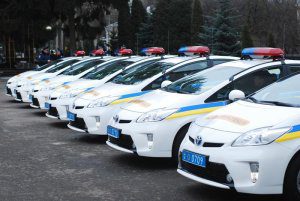 KYIV. May 15 (Interfax-Ukraine) – As part of the Green Investment Scheme, Japan has transferred 348 Toyota Prius cars to the Interior Ministry of Ukraine for use by the new patrol police service in Kyiv and Odesa.

“We are now at the final stage of transferring 348 Toyota Prius cars by the Japanese government under the Green Investment Scheme to Ukraine to replace [old] UAZ and VAZ cars,” Interior Minister Arsen Avakov said during a ceremony to mark the transfer in Kyiv.

The transfer of the cars is part of the reform of the whole system of the Ukrainian Interior Ministry, he said.

“These cars are for Kyiv and Odesa patrol police services with Lviv and Kharkiv police being next,” he added.

Avakov said that he hopes to continue cooperation with Japan in the future.

The cars equipped with new customized devices will be ideal for the police patrol service, he told journalists.

“There might be a meeting with the prime minister [Arseniy Yatseniuk] by the end of the week to discuss the next program [on cooperation with Japan under the Kyoto Protocol],” Avakov said.

In the next 2-3 weeks, the Toyota Prius cars will be equipped with Rubizh license plate recognition and traffic monitoring devices, Typhoon digital video recorders and video surveillance systems. Also, the livery of the cars will be modified to feature luminous paint.

“I think this summer you will see these cars together with brand new police, so you will like it,” the interior minister resumed.

KYIV. May 15 (Interfax-Ukraine) – Ukrainian President Petro Poroshenko has stressed the need for a Ukrainian Facebook office to be opened

Previously, Facebook CEO Mark Zuckerberg answered Poroshenko’s question about the possibility of Ukrainian Facebook office being opened. Zuckerberg said that over time this could be considered as it depends on the company’s development, in particular its software development. 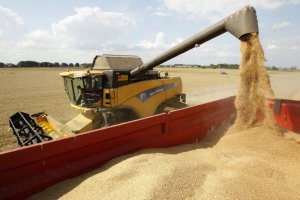 KYIV. May 14 (Interfax-Ukraine) – Ukrainian grain exports since the beginning of the current marketing year (MY, July-June), and as of May 14, 2015 amounted to 30.22 million tonnes, including 10.2 million tonnes of wheat.

According to a press release issued by the Ministry of Agricultural Policy and Food, maize exports totaled 15.4 million tonnes, barley – 4.38 million tonnes, other grains – 220,000 tonnes.

As reported, with reference to the State Statistics Service, in 2014 Ukraine harvested a record high of 63.8 million tonnes of grain and leguminous crops (excluding Crimea), which is 2.4% more than in 2013. 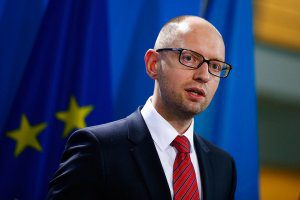 “The Ukrainian prime minister said that France would send experts to the Ukrainian State Property Fund ‘to ensure so that privatization in Ukraine is honest and transparent [and] suits real investors,'” a statement from the Ukrainian government quoted Yatseniuk as saying after the meeting, held in Paris.

According to Yatseniuk, French investors are willing to buy Ukrainian property that is going to be denationalized. France “is an investor the Ukrainian economy needs,” the Ukrainian prime minister said.

He said the French economy minister and agriculture minister are to visit Ukraine under an agreement between the two prime ministers.

“The two basic elements of economic cooperation between Ukraine and France are investment in energy and investment in the agrarian sector,” Yatseniuk said.