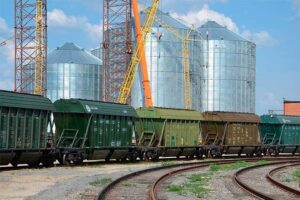 Ukrzaliznytsia plans in 2022 at its own enterprise – Paniutyne Wagon Repair Plant – to build 50 new grain carriages, head of the Ukrzaliznytsia board Oleksandr Kamyshin has said.
“Next year we plan to replenish the fleet of grain carriers, which are in a consistently high demand in the freight market. We are already placing an order at our Paniutyne car repair plant for the manufacture of 50 new-type grain carriages, which are entirely in-house development of the enterprise. We are launching the serial production of these cars,” he said.
He also added that the first best-performing grain carriage was manufactured and put into series production in 2019.
The total fleet of grain carriages of Ukrzaliznytsia is 11,400 units, and the company plans to renew it in the coming years.
To this end, the company has developed a concept for the renewal of the freight car fleet until 2028, according to which, in the next 7 years, in particular, it is planned to build and update almost 15,000 grain carriers, including 3,600 at the enterprises of Ukrzaliznytsia.
A car for bulk transportation of grain and other bulk food cargoes, model 19-6938, was developed by Paniutyne carriage repair plant, a branch of Ukrzaliznytsia. The prototype was made in 2019. Its volume has been increased to 120 cubic meters, while the maximum volume of old grain carriers is 94 cubic meters. The design speed of the car is up to 120 km/h. The car is certified and intended for operation on the railways of Ukraine and the member states of the Rail Transport Council.