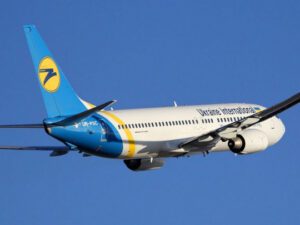 Ukraine International Airlines (UIA, Kyiv) has received an official message from insurance companies about the termination of aircraft insurance for flights in Ukraine’s airspace.
“Due to the foreign policy situation, Ukraine International Airlines has received an official notification from insurance companies to terminate the insurance of aircraft for flights in the airspace of Ukraine. In this regard, UIA, at the request of lessors, sends five Boeing 737-800 aircraft to Spain while retaining other aircraft in the company’s fleet. In addition, two aircraft of the airline are sent for scheduled engine maintenance in Belgrade,” the airline said in the official statement on Monday.
UIA also reported that negotiations are underway with insurance companies, the Ministry of Infrastructure of Ukraine and the State Aviation Service. The airline hopes for mutual understanding.
Earlier, on February 13, a working meeting was held at the Ministry of Infrastructure with the participation of the leadership of the President’s Office, the State Aviation Service of Ukraine, the state-owned enterprise UkSATSE, Boryspil International Airport and Ukrainian airlines on the situation in the air transportation market. As a result of the meeting, a solution was worked out to prevent further aggravation of the situation.
As a source of Interfax-Ukraine notes, Azur Air Ukraine and Windrose were not present at the meeting and did not request assistance with the insurance situation.
Then, also on February 13, the Cabinet of Ministers decided to allocate UAH 16.6 billion from the state budget’s reserve fund to the Ministry of Infrastructure to ensure the safety of aircraft flights in the country’s airspace. The allocated funds cover insured events for at least 23 aircraft.
According to information available to Interfax-Ukraine, SkyUp airline has submitted seven Boeing 737-800 aircraft to the list, Bees Airline – four of the same aircraft. Ukraine International Airlines (UIA) has submitted a list of 12 aircraft: four Embraer ERJ 190-100, six Boeing 737-800 and two Boeing 737-900ER.
The Verkhovna Rada Budget Committee on the evening of February 13 agreed on the redistribution of UAH 16.6 billion of state budget expenditures by reducing expenditures under the public debt service budget program to finance an additional state mechanism for flight safety insurance in Ukraine.