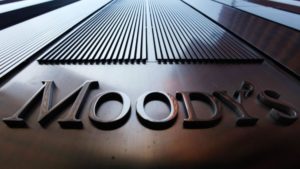 Moody’s Investors Service on November 22 changed the outlook on the Government of Ukraine’s ratings to positive from stable. At the same time, Ukraine’s long-term issuer and senior unsecured ratings have been affirmed at Caa1.
“The affirmation of Ukraine’s Caa1 ratings reflects its – while showing signs of improvement – significant external vulnerability,” Moody’s said.
The sizeable external debt repayments due over the coming years would – in the absence of a new International Monetary Fund (IMF) programme – require continued market access. At the same time, the risk of a new flare-up in geopolitical tensions continues to constrain upward movement in the credit rating at this time.
The key drivers for the change in the outlook to positive are: the rebuilding of Ukraine’s foreign exchange reserves is reducing external vulnerability in the context of large external repayments; and the improvement of Ukraine’s macroeconomic stability and the prospect for renewed reform momentum is strengthening the country’s economic resilience.
Concurrently, Moody’s has affirmed the Ca rating on the $3 billion eurobond that Ukraine sold in December 2013. The sole subscriber of the notes was the Russian government. The bond is under dispute due to the international armed conflict between the two governments.
Finally, Ukraine’s long-term foreign currency bond and deposit ceilings remain unchanged at B3 and Caa2 respectively, while the short-term foreign currency ceilings for bonds and deposits remain Not Prime (NP). The country ceilings for local currency bonds and deposits are also unchanged at B3.

TOP-20 COUNTRIES WITH WHICH UKRAINE HAS MOST POSITIVE TRADE BALANCE IN GOODS IN JAN-JULY 2019 (THSD.USD)

Top-20 countries with which Ukraine has most positive trade balance in goods in Jan-July 2019 (thsd.USD) 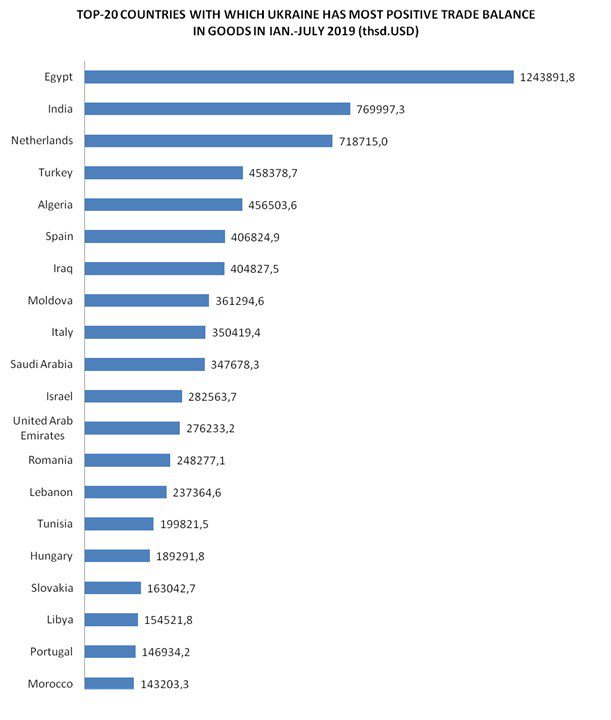 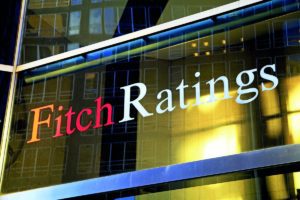 Fitch Ratings has upgraded Ukraine’s Long-Term Foreign- and Local-Currency Issuer Default Ratings (IDR) to ‘B’ from ‘B-‘, the outlooks are positive, according to a report on the rating agency’s website.
“Ukraine has demonstrated timely access to fiscal and external financing, improving macroeconomic stability and declining public indebtedness, while a shortened electoral period has reduced domestic political uncertainty. Expected macroeconomic policy continuity, the new government’s strong stated commitment to structural reforms and engagement with IFIs mean that Fitch expects further improvements in creditworthiness,” the report says.
“President Volodymyr Zelensky’s strong popular support and his party’s control of government and parliament provide the government with a uniquely strong position to move ahead with its reform-minded policy agenda. After a commanding victory in the second round of presidential elections, the president’s party Servant of the People (SOP) obtained control of the Verkhovna Rada (256 out of 450 seats) in snap parliamentary elections (originally scheduled for end October). The recently formed government under Prime Minister Oleksiy Honcharuk includes technocratic, pro-western and reform-minded ministers. Key economic policy makers such as Minister of Finance Oksana Markarova remain in their positions, supporting the continuity of policies underpinning reduced macroeconomic imbalances and improved stability,” Fitch said.
“The new prime minister intends to negotiate a new and longer program with the IMF, possibly an Extended Fund Facility (EFF), in the near term. The high likelihood of continued IMF engagement will facilitate access to official and market financing to meet large sovereign debt repayments in 2020-2021, and serve as an anchor for policies and reforms that could potentially lift growth prospects,” the agency experts stated.
“Prudent fiscal management, stable growth, declining interest rates and moderate exchange rate depreciation pressure will support continued government debt reduction. We expect government debt to decline to 47.9% of GDP (55.8% including guarantees) by end-2019, down almost 20 p.p. from the peak of 69.2% (80.9% including guarantees) in 2016 and below the current 57.5% ‘B’ median, and reach 44.4% by 2021. Government debt dynamics are highly exposed to currency risk as 67% is foreign currency denominated, but greater non-resident participation in the local bond market will help increase the share of local currency debt and extend maturities,” according to the document
“The long-awaited increase in Ukraine’s credit rating was made possible thanks to macroeconomic stabilization, a decrease in government debt and a reduction in political risks. This means that confidence in Ukraine is growing, and the risks associated with our creditworthiness are decreasing. And most importantly, the cost of borrowing will decrease,” Finance Minister of Ukraine Oksana Markarova said.