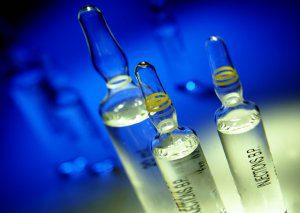 The association said that unfortunately, it is unknown what the state of the draft cabinet resolution that postpones the critical provisions for March 1, 2018 is.

“If the state is not ready to postpone [the introduction of new rules] supply of medicines from abroad could stop in five days,” the association said.

“The blind transfer of the whole complex of European practices in part of medicine imports licensing to Ukraine resulted in the postponement of all crucial provisions from March 1, 2013 to March 1, 2016 not to block imports of medicines to Ukraine. Since then the situation has not changed: today importers are not able to observe the requirements of Ukrainian law due to unbiased reasons,” the association said.

“The postponement of the provisions for March 1, 2018 is the forced tactic step. However, it is badly needed to avoid collapse in imports,” the EBA said.

The State Service for Medicinal Products of Ukraine told Interfax-Ukraine that imports of medicines from March 1, 2016 would not stop.

“Importers have valid licenses, and it is incorrect to say that imports of medicines will stop,” the service said.

At present, the new license conditions are being agreed by central executive power agencies.

RETAIL TURNOVER OF ENTERPRISES IN 2015 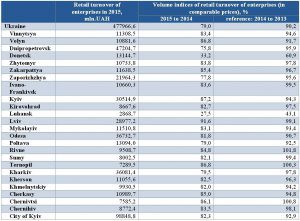 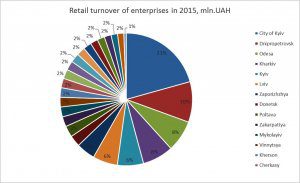 1 Excluding the temporarily occupied territories, the Autonomous Republic of Crimea, the city of Sevastopol and part of the anti-terrorist operation zone.

METINVEST BUILDS UP OVER 52% STAKE IN ZAPORIZHKOKS 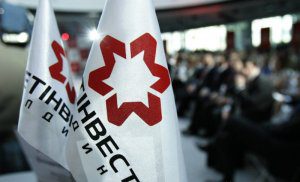 KYIV. Feb 26 (Interfax-Ukraine) – Metinvest B.V. (the Netherlands), the parent company of the Metinvest international vertically integrated mining and metal group, increased its stake in public joint-stock company Zaporizhkoks from 51% to 52.1677% of the share capital.

Zaporizhkoks reported in the information disclosure system of the National Commission for Securities and the Stock Market of Ukraine, referring to data received on February 23, 2016 from National Depository of Ukraine, as of January 1, 2016, Metinvest B. V. increased its stake from 60.856 million to 62.249 million shares.

Zaporizhkoks produces about 10% of all coke manufactured in Ukraine, and has a full technological cycle of processing coke-chemical products. The company also produces coke gas and pitch coke.

Metinvest is a vertically integrated international mining and steel company which owns 24 assets in Ukraine, Europe and the United States, and also manages each link of the production chain – iron ore and coal mining and coke production through to semi-finished and finished steel production; including the manufacturing of plate and coil, pipe rolling, shapes and bars and other value-added products. 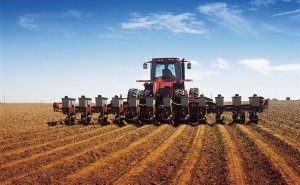 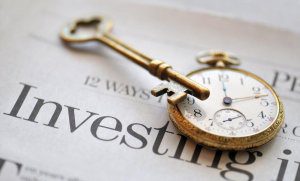 KYIV. Feb 25 (Interfax-Ukraine) – The investor in M.V. Cargo Andriy Stavnitser after the creation of a team that can realize investment projects plans to attract other investors to Ukraine, and he is creating an investment bank, Stavnitser said on Wednesday after singing of the investment agreement between M.V. Cargo and U.S. Cargill to invest $100 million in the construction of a grain terminal at the Yuzhny port.
Stavnitser has not yet delivered the details of the project on the creation of the investment bank.
Commenting on the investment agreement, he said that the sides formalized their plans via the signing of the agreement on the acquisition of 51% of shares in M.V. Cargo by Cargill.
The European Bank for Reconstruction and Development (EBRD) and International Finance Corporation (IFC) will be also investors in the project.
He said that his company will build the terminal under the turn-key conditions.
He said that the company signed a memorandum on dredging works with the Sea Port Authority of Ukraine. The works would allow accepting ships with draught of 100,000 tonnes to load them at the terminal. He said that there is a separate order of the prime minister regarding the signing of the dredging agreement with the authority.
The press service of M.V. Cargo told Interfax-Ukraine that the structure of investment will be the following: Sea Port Authority carries out all the required dredging works, and M.V. Cargo will invest a part of the funds into the construction of the grain terminal, and the rest of the funds will be provided by the EBRD and IFC.
The press service said that after its realization the project would be able to bring around UAH 300 million of taxes to the national budget and around $10 million of payments in the form of port fees every year.