Charges brought in a case opened into the embezzlement of state funds allocated for the construction of fortifications, also known as Project Wall, along the border with Russia have been forwarded to the Darnytsky District Court of Kyiv. “Charges have been filed against three officials of the State Border Guard Service of Ukraine, three directors of contractor firms and two intermediaries. A total of eight people will go on trial,” the Specialized Anti-Corruption Prosecutor’s Office of Ukraine said on its Facebook page.
These persons are suspected of embezzling Ukrainian budget money allocated for efforts to equip the Russian-Ukrainian state border, territories adjoining the zone of the anti-terrorist operation in Donbas and the Autonomous Republic of Crimea, the post said.
Investigators have established that Ukrainian State Border Guard Service officials, acting in complicity and with the help of companies, misappropriated UAH 16.688 million (over $630,000) worth of budget funds.
Project Wall includes the construction of fortifications along the Russian-Ukrainian state border and in territories adjoining the area of the anti-terrorist operation in Donbas.
In February 2019, Ukrainian State Border Guard Service spokesman Oleh Slobodian estimated the readiness of Project Wall at around 30% at that time. 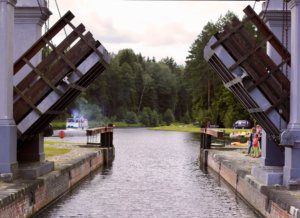