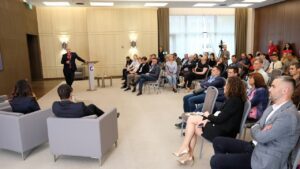 Fifteen original events about wine, winemaking and gastronomy tourism took place as part of Odessa Wine Week in Odesa from May 18 to May 23.

The event was attended by 87 speakers and experts from Ukraine (from Odesa to Zakarpattia) and from 18 countries (from Austria to Japan).

The event aroused great interest of wine, tourist, business and media communities – about 3,000 visitors attended the locations of Odessa Wine Week these days.

The program consisted of activities of various directions: industry, cross-industry, educational, mass. In particular, the congress part included more than 40 topics of reports and discussions.

Winemakers, marketers, journalists discussed the prospects of the wine industry.

As a result of the discussion, the winemakers came to such conclusions about the future of wine: wine brands will become more personalized, trends on rose and sparkling wine are likely to continue, online tastings will not be able to replace traditional ones, in Ukraine, the consumption of Ukrainian wine will grow (this will not happen tomorrow, but in the near future), and there will be more wineries in Ukraine.

Participants in the forum also discussed, listened to reports and presentations in the panel “Government, grants, banking programs to support winemaking. Investments in winemaking.” They listened to fellow winemakers from Ukraine and Moldova, marketers and economists, Minister of Agrarian Policy of Ukraine Roman Leschenko. They learned from foreign participants about their experience, investment and government programs to support winemaking in Argentina and Valpolicella region (Italy).

In Ukraine, they finally talked about wine journalism – the first discussion panel on this topic was held at the Wine Future Forum. Can Ukrainian wine journalism help winemakers to create and promote the “Ukrainian wine” brand? What do we need for this? We were looking for an answer to this, and the idea of creating the Association/Bureau for the Development of Wine and Brand Journalism arose. 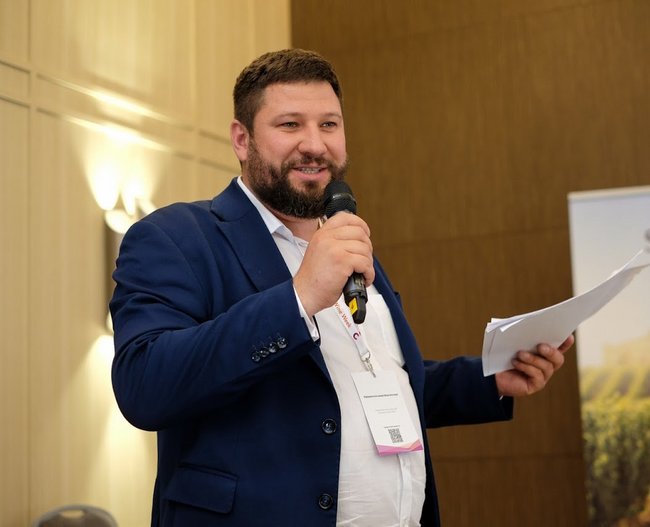 Some 65 Ukrainian companies (305 wine samples) took part in the competition.

The evaluation used a specialized tasting program of the English company Gustos Life, which uses blockchain technology (eliminates the possibility of changing the ratings of experts during the competition and after its completion).

A feature of the competition examination is a combination of the methodology of sensory analysis and the work of the jury, which consisted of 16 qualified and certified experts. The work of the jury could be watched live.

The winners of the competition are given the right to place the logo of the award on the product label.

A solemn ceremony of awarding the winners was held with the participation of national and regional media, wine and business communities. 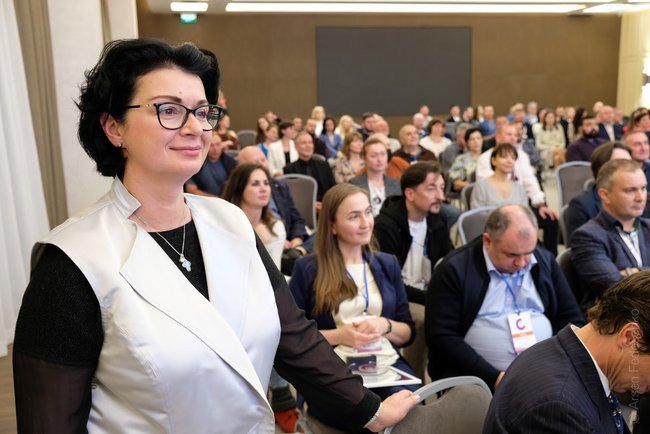 This competitive project is aimed at promoting the brand “Ukrainian wine,” the formation of the image of Odessa Black wine as a business card of Ukrainian winemaking in the world – by analogy with Saperavi (Georgia), Feteasca (Moldova), Malbec (Argentina), Carmenere (Chile), Shiraz (Australia) and others.

Some 32 samples of wine from the autochthonous grape variety “Odessa Black” were submitted to the competition.

During the project, the best glass of the world-famous Riedel brand was officially chosen for the local wine “Odessa Black.” From nine variants of glasses, wine experts chose glass № 4 from the Performance collection.

– Ricardo Nunez, a winemaker with extensive experience, the owner of the Vinos de La Luz group of companies (wineries in Spain, Italy, Argentina, the United States), conducted an author’s tasting of eight wines of his international company.

– Circular tastings were held by 18 wine companies of Ukraine – partners and participants of Odessa Wine Week.

– Tasting on alternative aging under Bousinage technology was conducted by Wood International LLC. 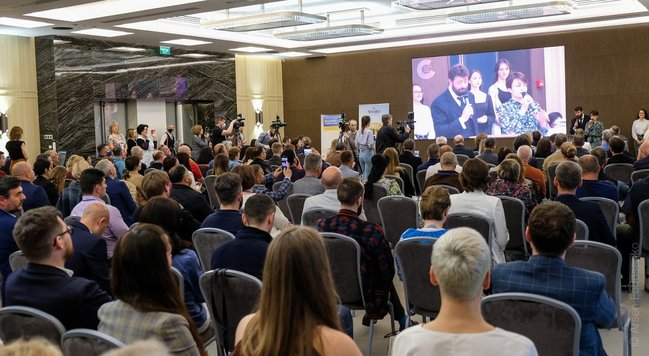 The conference “Innovative tools in viticulture in the context of climate change” brought together leading winegrowers and oenologists from Ukraine, Moldova, France, Italy and the United States. This is a very important professional event for winegrowers, during which experts shared methods of ensuring sustainable viticulture, discussed current issues of the industry and ways to solve them.

The online symposium was attended by 18 scientists from 15 countries on five continents.

OENOVITI International Network (OIN) is a unique international community of researchers in the field of viticulture and winemaking. Ukraine has been represented by the Odesa National Academy of Food Technologies in this prestigious scientific institution since 2015.

“Enogastronomic tourism – a driver for the development of tourist destinations”

Organizer: Department of Culture and Tourism of Odesa City Council.

The conference brought together representatives of tourism, restaurant and wine industries, who discussed enogastronomic tourism as a growing sector of the world tourism market.

They listened to thorough reports on grant projects in the field of enogastronomic tourism, in particular, on the “Wine and Taste Road,” on tools for the promotion of enogastronomic roads and wine tourism operators in Ukraine, on the experience of author’s tours.

Participants in the discussion “Wine and Tourism” talked about wine as a driver of regional development on the example of Bordeaux, watched presentations of wine and enogastronomic locations of Ukraine (Wine Culture Center SHABO, Chateau Chizay, Wine Station, Koblevo wine location) and the United States (Dr. Konstantin Frank Winery).

The moderators and participants in Odessa Wine Week events were high-class professionals: Yevhenia Nikolaichuk (the co-founder of “Like a Local’s Wine Bar,” a sommelier school teacher, WSET4), Tetiana Ponomarenko (the expert in wine marketing, advertising and PR, an associate professor of journalism, advertising and publishing of Odesa Mechnikov National University, the coordinator of projects on wine journalism), Volodymyr Pechko (the head of UKRSADVINPROM), Vladyslav Blumberg (the president of the Association of Winegrowers and Winemakers of Odesa region), Ivan Bachurin (the president of the Association of Sommelier of Ukraine), Anna Sarkisyan (the dean of the Faculty of Wine and Tourism at the Odesa National Academy of Food Technologies), Maksim Urakin (the sales and marketing director at Interfax-Ukraine and the editor of Open4Business), Maria Kalenska (an enogastronomic expert, the ambassador of Odesa cuisine in London). 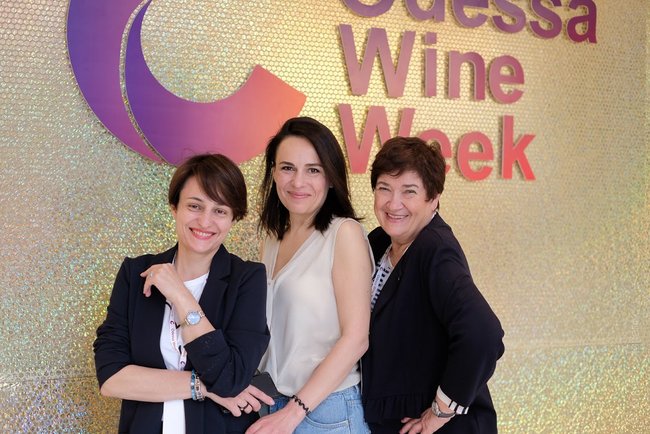 At Odessa Wine Week, the exposure area was organized with the participation of Ukrainian wine companies and producers of goods, services and technologies related to winemaking.

All the main events of Odessa Wine Week took place in the halls of Premier Hotel Odesa and even in the open air in front of the hotel (the AGSOLCO Ukraine exposition).

For the general public, the highlight of the program was the project “Wine Flight” (“Air Tasting”), a horizontal flight with tasting the top five Ukrainian wines and culinary specialties of Odesa cuisine on board the UIA aircraft.

This is a joint project of Odessa Wine Week and UIA to promote the “Ukrainian wine” brand.

The passengers tasted the best five Ukrainian wines according to the tasting contest “Odessa Wine & Spirit Awards,” which took place the day before as part of Odessa Wine Week:

Wine tasting was combined with the tasting of local dishes of Odesa cuisine.

The Odessa Wine Week program ended with the open-air gastronomic festival “Taki Da, Vkusno” on the territory of the Odesa film studio. The participants in the festival presented to the mass audience of visitors branded culinary products and wine brands. 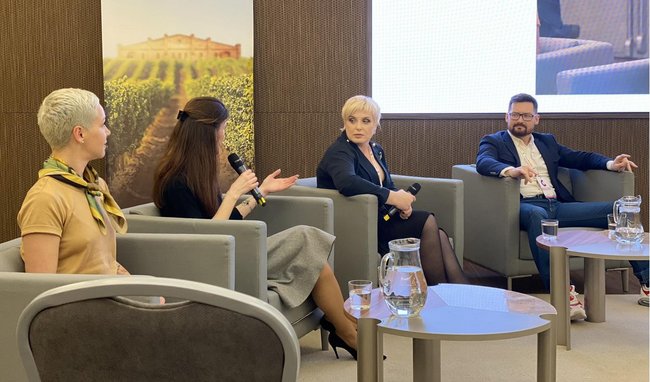 The general news partner of Odessa Wine Week is Interfax-Ukraine

– Association of Winegrowers and Winemakers of Odesa region

The official photographer of Odessa Wine Week is Arsen Fedosenko

Organizer of the conference “Enogastronomic tourism – a driver for the development of tourist destinations”: the Department of Culture and Tourism of Odesa City Council

▪ MIRS Corporation is the official distributor of RIEDEL in Ukraine

Organizer of the conference “Innovative tools in viticulture in the context of climate change”: UKRSADVINPROM association 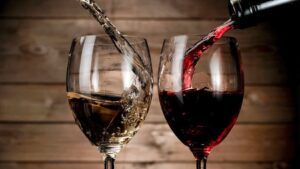 The international project Odessa Wine Week – a series of events focusing on key areas of development of the wine market and enogastronomic tourism will be held for the first time in Odessa from 18 to 23 May 2021.
Odessa Wine Week unites the efforts of the Ukrainian wine community, aimed at promoting and promoting the brand “Ukrainian wine”, the creation of a wine business card of Ukraine, the integration of Ukraine into the world wine community.
Odessa Wine Week events will bring together leading wine experts, scientists, oenologists, winemakers, government officials, national and foreign wine associations, tourism industry, HoReCa, retail, sommelier, wine traders, producers of related products and technologies, marketers, guilty experts, journalists.
The program includes events of various orientations: branch, cross-branch, educational, mass.

Offline with live broadcast on YouTube channel.
Awards of the competition:
Gold medal (86-95.5 points); Silver medal (82-85.99 points); Diploma of the contestant.
The winners of the competition have the right to place the logo of the award on the product label.
► International Symposium 2021 OENOVITI International Network
May 18, 19, 20. Online (Zoom).
“Challenges in viticulture and oenology: geographical indications of wines and wine tourism, authenticity, innovation.”
Participants – scientists from 15 countries.
OENOVITI International Network (OIN) is a unique international community of researchers in the field of viticulture and winemaking.
Ukraine has been represented in this prestigious scientific institution since 2015 by the Odessa National Academy of Food Technologies.

► Project “Best Riedel glass for Odessa Black variety”
Selection of the optimal Riedel glass for local wine Odessa Black.
The project aims to promote the brand “Ukrainian wine”, the formation of the image of Odessa Black wine / Odessa Black as a business card of Ukrainian winemaking in the world – by analogy with Saperavi (Georgia), Fetyasca (Moldova), Malbec (Argentina), Carmener (Chile), Shiraz ( Australia) and others.
● The first stage. It took place on April 22 at the ONAHT Sensory Analysis Laboratory. Competitive selection of wines, tasting of 32 samples. 10 wines passed to the second stage.
● The second stage. Selection of the optimal Riedel glass for Odessa Black wine, work of the expert commission – May 20, 10.00-14.00, Premier Hotel Odesa, Mare DiVino restaurant.
► Solemn ceremony of awarding the winners of the tasting competition “Odessa Wine & Spirit Awards” and participants and winner of the project “Best Riedel glass for Odessa Black variety”
May 20, 18.30-20.00, Premier Hotel Odesa, Aquamarine Conference Hall.
In order to disseminate information about the best Ukrainian wines, the awards will be held in the form of a spectacular ceremony with the participation of national and regional media, wine and business communities.
► Conference “Food and wine tourism – a driver for the development of tourist destinations”
May 21, 10.00-18.00, Premier Hotel Odesa, Aquamarine Conference Hall.
Offline + online
▪ Food and wine tourism – a growing sector of the world tourism market:
– Cases of the UNESCO Gastronomy Bridge.
– Wine is a driver of the region’s development. Bordeaux experience.
▪ Odessa cuisine is a tourist magnet of the region.
▪ Wine and tourism: the best examples of local projects. Presentations of wine and enogastronomic locations.
▪ The influence of the media on the creation of a positive tourist image of the region. Oenogastronomic journalism.
▪ Grant projects in the field of enogastronomic tourism. “Roads of wine and taste of Ukraine”.

► “Air tasting”
May 22, 12.00-14.00, Odessa airport.
Air travel with tasting on board the UIA plane of the top 5 Ukrainian wines – winners of the All-Ukrainian tasting competition “Odessa Wine & Spirit Awards”, as well as culinary specialties of Odessa and Bessarabian cuisine.
A joint project of Odessa Wine Week and UIA to promote the Ukrainian wine brand.
https://inlnk.ru/rJJ70
► XI gastronomic festival “Yes, delicious”
May 22, 23, 11.00-20.00, Odessa Film Studio.
A two-day festival, the participants of which present branded culinary products and wine brands. The basis of the festival menu are dishes and drinks of local Odessa cuisine. The festival is accompanied by an entertainment program for the whole family.
Large selection of delicious food, excellent conditions for outdoor recreation, live music and shows on the festival stage, entertainment program on the “Territory of children’s games and creativity”, original photo areas.
The festival is very popular with residents of Odessa and guests of the city, is held in Odessa for the eleventh time. https://www.facebook.com/takidavkusno
More about each event and conditions of visit: https://odessawineweek.com/
Project news https://www.facebook.com/odessawineweek/
***
Official support
▪ Odessa Regional State Administration
▪ Odessa City Council