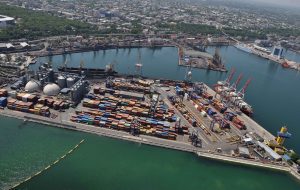 State-owned Ukrainian Sea Ports Authority (USPA) has said it eliminated pollution of the sea next to the sunken tanker Delfi in the area of Dolphin Beach. The enterprise insists on solving the problem of raising it, stressing that the ship owner must do this, USPA’s press service said on Thursday.
“The administration of the seaports of Ukraine, taking into account the active discussion of this issue by the public, emphasizes that the only legal way to solve the problem with the emergency tanker is to carry out all the work and eliminate the consequences of the incident directly and exclusively by the owner,” the statement said.
At the same time, the state-owned enterprise notes that the USPA does not have any legal grounds for independently raising the vessel. According to Article 123 of the Merchant Shipping Code, USPA will receive such a right only if a number of conditions and circumstances independent of it arise directly:
– the owner of the vessel will not ensure its recovery within the time limits established by the captain of the port (State services of sea and river transport of Ukraine). USPA will have the right to raise the vessel no earlier than July 20, 2020;
– the State Environmental Inspectorate provides an appropriate document stating that the tanker poses an immediate threat to environmental pollution;
– the owner of the vessel documents the readiness and undertakes to compensate USPA SE the cost of the work;
– the captain of the port of Odesa grants permission to raise property that has sunk within the water area of the seaport.
“If at least one of the above conditions does not occur, the right (and in this case the obligation) to raise and remove the vessel will remain solely with the owner. As of June 23, USPA received an official, clear and unambiguous refusal for compensation of expenses, and also assured of a full understanding of the responsibility and financial, organizational and technical readiness of the ship owner to raise his own ship,” USPA said.
At the same time, as noted in the message, organizationally, USPA was ready as early as April 1, 2020 (the deadline originally set by the port captain). Tender documentation was worked out and agreed and funds are provided in the financial plan.
According to the latest data from the state-owned enterprise, the work execution plan provided by the ship owner was worked out and agreed by the captain of the Odesa Sea Port and the State Environmental Inspectorate. Based on the above, the activation of the preparatory work, at the request of the ship owner, the deadline for the completion of the work on cleaning the tanker from the Odesa beach by the port captain has been extended.
Earlier, the State Environmental Inspectorate reported that according to the results of samples taken by Ukraine’s State Ecological Inspectorate, the content of oil products in the Black Sea near the Dolphin beach (Odesa) is 16.4 times higher than the permissible concentration.
As reported, in the Gulf of Odesa, the Delfi tanker under the flag of Moldova suffered a disaster – the ship broke anchor.
USPA said initially the tanker was in neutral waters and did not apply for entry into the Odesa or “South” sea ports. But later a signal was given that the ship was in distress, it was left without fuel, with an inoperative engine. In this regard, the Odesa Rescue Coordination Center, which received the signal, began to take measures to eliminate the emergency. It was agreed to tow the tanker to Ochakiv port.
On the night of November 22, Delfi managed to gain an anchor at a distance of about 1 mile from the coast near the Dolphin Beach. However, according to USPA, at 5:00, the vessel began drifting again. On the evening of the same day, rescuers managed to evacuate three crew members from the ship. They were hospitalized, doctors reported overwork and hypothermia.
The owner of the vessel had to take measures by March 31, 2020 to raise and remove the sunken tanker from the waters of Odesa Sea Port. On April 1, the prosecutor took control of the case.

Nika-Tera sea terminal (Mykolaiv), part of Dmytro Firtash’s Group DF, handled 2 million tonnes of cargo from January 1 to April 10, 2020, the company said on Facebook.
“After 49,000 tonnes of Ukrainian corn for export had been loaded on board the Panamax GRIZZLY, on April 10 Nika-Tera port’s cargo turnover amounted to 2 million tonnes from the beginning of 2020. This batch of corn is sent by Louis Dreyfus to Spain,” the report says.
The GRIZZLY bulk carrier was loaded at the eleventh berth of the port simultaneously with two loading machines, which allowed Nika-Tera to achieve a daily loading rate of 36,000 tonnes.
According to the company, in the first quarter of 2020, Nika-Tera’s cargo turnover amounted to 1.87 million tonnes, which is 1.5% more than in the same period last year.
In general, in the first three months of operation, the port handled 85 vessels, including two bulk carriers with additional loading at the roads, as well as four tankers with sunflower oil.
In the structure of cargo turnover, the main cargo remains cereals, legumes and oilseeds, which accounted for 65% of the quarterly transshipment volume or 1.22 million tonnes. Bulk cargo amounted to 14% or 270,000 tonnes, meal some 17% (320,000 tonnes), and oil transshipment some 4% (70,000 tonnes). 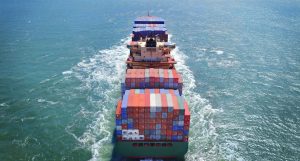 Tariffs for sea freight and air cargo have increased, while the cost of international road haulage has stabilized, but there may be queues at the key automobile checkpoints, Viktor Shevchenko, the co-owner of Zammler logistics group, has told Interfax-Ukraine. “Compared to the beginning of the year, now due to coronavirus [COVID-19] epidemic spread, tariffs for sea freight have risen by an average of $150-200 per TEU. A jump in prices occurred in March, as China began to recover production activity, demand for cargo departures increased, there was a shortage of places, respectively, the cost increased,” he said.
According to Shevchenko, due to the following sanitary and hygienic safety rules, procedures for processing goods in ports are delayed.
According to him, in connection with the epidemic, there is no air traffic now, thus, cargo carried earlier by passenger flights is delivered by cargo planes.
“Accordingly, there are not enough places for cargo departures. Airlines that continue to fly to Ukraine with cargo planes have increased tariffs. Now a place for departure should be booked a few days before departure, tariffs are provided in the mode for today,” the co-owner of Zammler said.
Shevchenko also said that over the past week, the situation with international trucking has changed dramatically.
“If last week tariffs on imported freight were 40-50% higher than pre-quarantined, to date the price situation has stabilized. Last week there was a shortage of transport in Europe due to high demand (recipients tried to replenish stocks of goods). But now we see a shortage of goods, namely enterprises are suspending operations, the volume of exports and imports is declining,” he said.
According to Zammler’s forecasts, the queues at key automobile checkpoints will soon resume again due to the closure of the Hrebenne-Rava-Ruska checkpoint.
Shevchenko said that the cost of freight traffic in the territory of Ukraine due to the epidemic has not yet changed.
“There is a slight decline in volumes, to 10%. It is difficult to predict the further value, since it directly depends on the stability of the exchange rate,” he said.
Zammler Group is a Ukrainian group of logistics companies with offices in Europe and Asia. The group companies provide all types of logistics services for the B2B segment. 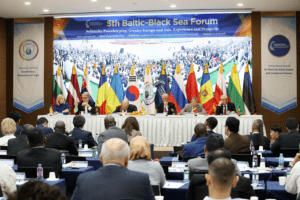 Former president of Ukraine Leonid Kuchma and former chairman of the Supreme Council of Belarus Stanislav Shushkevich have discussed a preparation for holding Baltic Black Sea Forum.
“Today in Kyiv, Leonid Kuchma received Chairman of the Supreme Council of the Republic of Belarus (1991-1994) Stanislav Shushkevich. The conversation was about preparations for the seventh Baltic Black Sea Forum,” Kuchma press secretary Darka Olifer wrote on Facebook.
As reported, the first Baltic Black Sea Forum “Through dialogue to trust” was held in Kyiv in 2016. The agreement on the creation of this platform was signed by former statesmen and leaders of Ukraine, Belarus, Estonia, Moldova, Lithuania, Latvia, Poland and Russia.