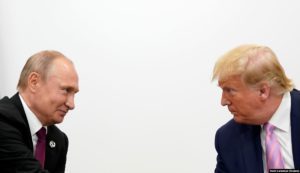 U.S. President Donald Trump and Russian President Vladimir Putin discussed Iran, Ukraine, Syria, and Venezuela at their talks on the sidelines of the G20 summit in Osaka on Friday, the White House said in a report. “They also discussed the situations in Iran, Syria, Venezuela, and Ukraine,” the White House said.
The presidents also exchanged opinions on issues such as bilateral relations and arms control, it said.
The meeting between Trump and Putin continued for almost an hour and a half.