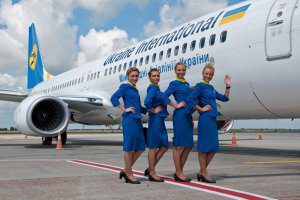 Ukraine International Airlines (UIA) on February 16, 2018 expanded its fleet with long haul widebody Boeing 777-200ER plane. The press service of the airline reported that the plane is officially registered in Ukraine as UR-GOA. UIA will operate the new plane with 361 seats of business, premium economy and economy classes on long haul flights to New York, Beijing and Bangkok.
“The aircraft is from the world’s largest leasing company, AerCap. It is equipped with a modern personal entertainment system on board made the Panasonic Corporation. In particular, monitors with a wide content menu are installed in the back of each seat: a wide selection of movies, music and computer games. Films made in Ukraine will be presented to passengers of Boeing 777 in order to popularize Ukrainian movie production. The content is available in four languages: Ukrainian, English, Chinese and Russian,” the UIA said.
Boeing 777 seats are equipped with individual sockets and USB-modules for recharging electronic mobile devices, as well as Wi-Fi equipment.
All three class cabins have a modern Sky Interior lighting system manufactured by Bruce Aerospace.
The airline said that this delivery is the first stage of the expansion program for the UIA’s long haul fleet. Three more Boeing-777s will arrive in the first and third quarters of 2018 after major maintenance, which includes testing and verification of all systems, units and assemblies. The contractor of the maintenance and final assembly of interiors is Air France-KLM Engineering & Maintenance.

87% OF WINTER CROPS IN UKRAINE IN GOOD/FAIR CONDITION 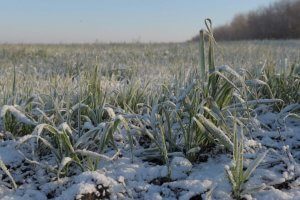 Almost 6.3 million hectares (87%) of areas planted with winter grain crops are in good and fair condition, First Deputy Minister of Agrarian Policy and Food of Ukraine Maksym Martyniuk has written on his Facebook page. According to the report, as of middle of February crops on 971,000 hectares (13%) out of 7.3 million hectares areas planted with winter crops and sprouted are in poor and very poor condition.
The deputy minister said that winter rapeseeds sprouts are seen on 99% out 1 million hectares planted with rapeseeds, including crops in good and fair condition on 884,600 hectares (89%) and crops in poor and very poor condition on 110,000 hectares (11%).
“The data is not final. The further condition of the crops will depend on the weather, but we can give a preliminary cautious forecast that the wintering was successful without significant losses,” Martyniuk wrote. He said that, according to preliminary data from the regions, the crop area for the harvest of 2018 is comparable to last year and is expected to be within 27.2 million hectares. Of these, 14.6 million hectares (54%) under grain crops, which corresponds to the standards of the optimal ratio of crops in the crop rotation. 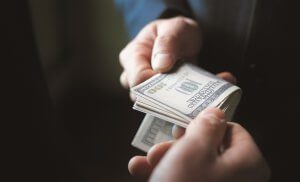 The International Monetary Fund (IMF) insist on the expeditious consideration of the bill on the Anti-Corruption Court by Ukrainian authorities. “It is now important that the authorities move expeditiously with parliamentary consideration of the draft law on the anticorruption court, while ensuring that the necessary amendments are adopted during the parliamentary process to make the approved law fully consistent with [Extended Fund Facility, EFF] program commitments and the recommendations of the Venice Commission of the Council of Europe,” the IMF said in a press release after a visit of a small staff team to Kyiv.
Further progress also needs to be made on other delayed measures that are necessary to achieve program objectives, including in the energy sector and with regard to fiscal policy. The IMF said that discussions will continue in the coming weeks. As reported, a small IMF staff team visited Kyiv during February 12-16 for technical discussions with the authorities.
Since the arrival of a new government led by Volodymyr Groysman in April 2016 talks over continued funding have resumed but it was not until mid-September that the IMF decided to allocate the third tranche, $1 billion. The fourth tranche was received on April 3, 2017.
Within the fourth review, which opens the way for a fifth tranche, the IMF continues to study the law on pension reform passed by the Verkhovna Rada. In addition, Ukraine still needs to pass legislation on the creation of the Anti-Corruption Court, as well as to adjust the domestic gas tariffs in accordance with the previously approved formula. The date of the mission’s arrival for the new review of the EFF program has not yet been determined. 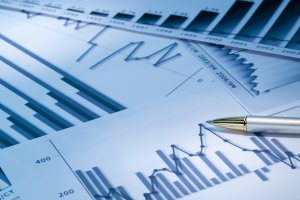 Average cost of leasing farmland in state ownership transferred to leasing at auctions as of January 1, 2018 totaled UAH 2,793 per ha, which is 24.2% more than a year ago. According to a posting on the website of the State Service for Geodesy, Cartography and Cadastre, the cost of leasing last year UAH 2,249.80 per ha.
“The possibility of land transfer without holding auctions was blocked, and land auctions turned into a highly competitive tool that ensured the average rental rate of state-owned land for the past year at the level of 14.74%,” First Deputy Minister of Agrarian Policy and Food of Ukraine Maksym Martyniuk said.
He also recalled that in 2017, the state for the first time determined the basic principles of land management by adopting the appropriate strategy and fixing the least permissible leasing parameters (up to seven years and no less than 8% of the standard pecuniary value).
At the same time, the authority pointed out a twofold difference in the cost of leasing of state-owned and private property. So, the average cost of leasing farmland in private property last year was at the level of UAH 1,400 per ha, which is 25% higher than the indicator of 2016 (UAH 1,090 per ha). The highest rents for land parcels were recorded in Cherkasy (UAH 2,960 per ha), Poltava (UAH 2,500 per ha), Kharkiv (UAH 2,100 per ha) and Sumy (UAH 2,100 per ha) regions. At the same time in Zakaarpattia region the rent amounted to UAH 718.90 per ha, Zaporizhia – UAH 794.70 per ha, Mykolaiv – UAH 825.80 per ha and Kherson – UAH 842.30 per ha.
The total area of this type of farmland leased out under contracts amounted to 16.9 million hectares.
According to Martyniuk, the growth in the cost of leasing private land is hampered by the presence of local monopolies of tenants, the lack of a free land market and effective associations of land owners, most of which are citizens of old age.

German Foreign Minister Sigmar Gabriel has stated Berlin is ready to invest in the restoration of the east of Ukraine. “Germany is ready to invest in the restoration of Donbas,” Gabriel said at a breakfast with the representatives of business circles of Russia and Germany.
He also supported the idea of deploying the UN peacekeeping mission in Donbas. “The idea of the UN peacekeeping mission has been on the agenda for six months. We need to try to speed it up. But we cannot solve this issue independently, it needs to be discussed within the framework of the UN Security Council,” the minister added.
According to Gabriel, “this is one of the few realistic opportunities to achieve results quickly enough.”
At the same time, the German foreign minister called for the phased lifting of sanctions from Russia in case of heavy weapons withdrawal in Donbas.
“If we manage to withdraw heavy weapons from the east of Ukraine, then it will be necessary to lift the sanctions step by step,” Gabriel said. 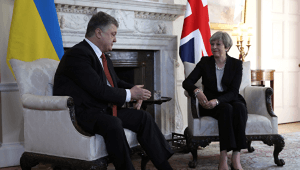 Ukrainian President Petro Poroshenko and British Prime Minister Theresa May at a meeting in Munich discussed the prospect of the UN peacekeeping mission in Donbas. “The parties discussed the deployment of the UN peacekeeping mission in the occupied part of Donbas,” the presidential press service said after the meeting. Poroshenko thanked Great Britain for continuing the educational mission for Ukrainian military men in the framework of the Orbital operation. In addition, he invited May to visit Ukraine.