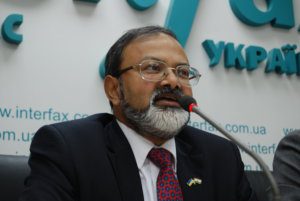 Trade between Ukraine and India in 2017 grew by 18.8%, reaching $2.8 billion, Indian Ambassador to Ukraine Mr. Manoj Kumar Bharti said at a press conference at Interfax-Ukraine on Tuesday. “Here two important moments should be pointed out. India became the fifth country in the volume of the export from Ukraine abroad. In addition, India is the second country with which Ukraine has the surplus in trade. Only Ukraine and Egypt have bigger surplus in trade – $1.75 billion, while between Ukraine and India it is $1.65 billion,” he said.
The ambassador said that these indicators fuel confidence that the growth of trade turnover in 2018-2019 could be 20% and 25%, respectively.
Commenting on trade relations between the countries, he said that India was the first country in terms of export of Ukrainian sunflower oil. Last year India exported $2 billion worth of oil. In addition, in 2017, for the first time, a lot of beans were exported from Ukraine to India.
“Another very important factor is that the largest share of the total number of foreign students in Ukraine last year was made up of Indian students, a figure we reached for the first time in 15 years,” the Indian diplomat said.
So, according to him, today more than 10,800 Indian students are studying in Ukraine, which is 80% more than in 2015.
“I am pleased to say that in almost two years we have increased the number of Indian students from 6,000 to almost 11,000. Taking into account the fact that each Indian student spends about $5,000 a year for education, living and personal expenses, Ukraine already earns $55 million only through the provision of education to Indian students,” he said.
The ambassador said that India plans to increase the number of its citizens studying in Ukrainian universities to 40,000 in the coming years, which in turn will give Ukraine about $200 million a year.
He also said that the inclusion of India in the list of countries, which citizens receive the Ukrainian visa upon their arrival to the airport, had a positive impact on the tourist flow. The number of Indian citizens, who visited Ukraine last year, increased more than 50%, to 29,400 people. 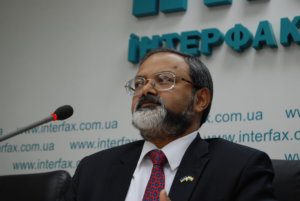