PRESIDENT OF UKRAINE: BUSINESS SHOULD NOT INFLUENCE ELECTIONS 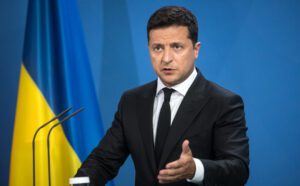 President of Ukraine Volodymyr Zelensky, speaking about “red lines” for business representatives, believes that they should not influence people’s votes, participate in elections and finance strikes. “You don’t need to influence people’s opinions because you have something. For example, you have control over a large number of people because of the presence of a large number of enterprises. You cannot tell them to vote for this or that person and pay or delay wages in connection with this. Another story: as a businessman, in principle, you should not take part in elections… Further: you have no right to finance strikes. You have no right to ‘pester’ the population, distribute money. It’s hard for the country,” Zelensky said at a marathon press conference on Friday, answering the question of which “red lines” business representatives should not cross.According to Zelensky, business representatives also have no right to bribe MPs.“Well, how can you buy people? It’s slavery,” he said.He also added that people need to see the real situation with who this or that businessman is.“If there is no influence it is cool. We have so rich people. Well, give jobs, develop. The state is very interested, because today it is very difficult to find international investments in the state, but there is domestic investment. We need to reinvest,” the president added.

PRESIDENT OF UKRAINE ON DE-OLIGARCHIZATION: WE ARE AT BEGINNING OF BIG PROCESS 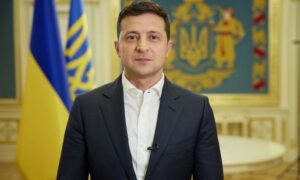 President of Ukraine Volodymyr Zelensky has said that Ukraine is at the beginning of a “big process” and a “big war” on the issue of deoligarchization.“Regarding de-oligarchization, I believe that we are at the beginning of a big process. And we are in progress, and we are in a big war on de-oligarchization,” he said at the press marathon entitled “30 questions for the President of Ukraine” in Kyiv on Friday.According to Zelensky, he “has nothing personal” about the issue of de-oligarchization.“I respect big business with respect to jobs. But it is very important that big business is not top business tycoons who influence the media, politicians. I think this is very important,” he added.

PRESIDENT OF UKRAINE MEETS WITH EMIR OF QATAR 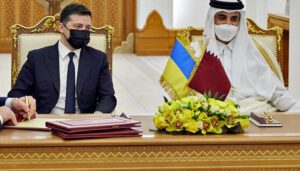 During his visit to the UK, where he takes part in the climate summit, President of Ukraine Volodymyr Zelensky met with Emir of Qatar Tamim bin Hamad Al Thani, during which the issue of enhancing bilateral cooperation between Ukraine and Qatar was discussed.
“Discussed with Tamim bin Hamad Al Thani the intensification of Ukraine-Qatar trade-economic cooperation, the development of military-technical cooperation and the possibility of supplying Qatari liquefied natural gas to Ukraine. Thanked for the assistance in evacuating Ukrainian citizens from Afghanistan,” Zelensky said on Twitter on Monday. 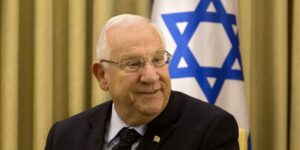 On the occasion of the 80th anniversary of the murders in Babyn Yar, Israeli President Isaac Herzog will make his first official visit to Ukraine, according to the Israeli Embassy in Ukraine.”During his official visit to Ukraine, President Herzog will speak at events dedicated to the 80th anniversary of the Babyn Yar massacre, meet with President Volodymyr Zelensky and Prime Minister Denys Shmyhal, address the Verkhovna Rada and meet with representatives of the Ukrainian Jewish community. The visit is expected on October 5 to 7, 2021,” the embassy said in the statement, which was provided to Interfax-Ukraine on Wednesday.
The Duke will arrive in Ukraine on Tuesday, October 5, 2021, on the first official visit of his presidency, at the invitation of President Volodymyr Zelensky.
During the visit, President Herzog will take part in the official international ceremony dedicated to the 80th anniversary of the murders at Babyn Yar, the opening of Kyiv Holocaust Memorial Center in Babyn Yar. Zeev Elkin, a government representative in Ukraine, and other members of the Knesset will also join the presidential delegation, the embassy said.
“There is a need to keep talking about this terrible event and learning its lessons. The Holocaust Memorial Center at Babyn Yar is an important place to celebrate this painful memory and to make a statement that we must continue to make together: never again. The only way to build a present and a future in which crimes against humanity will not find support – it is to study the past, including the Holocaust and the persecution of the Jewish people, in the spirit of the commandment “and you will tell your son and daughter.” I welcome the invitation of President Zelensky and his dedication to the war against anti-Semitism,” the embassy said.
On the morning of Tuesday, October 5, President Herzog will fly to Ukraine, where he will start his visit by laying a wreath at the Tomb of the Unknown Soldier in Kyiv, and then go to an official reception at the Mariinsky Palace, which will start with a guard of honor.
Later, President Herzog will meet with President Zelensky. The meeting will be followed by a joint press statement. In the evening, President Zelensky will receive President Herzog at an official dinner.
On Wednesday morning, President Herzog will address the Verkhovna Rada. On the same day, President Herzog will take part in an event with the local Jewish community and will meet with President of the Federal Republic of Germany Frank-Walter Steinmeier, who will also attend the Babyn Yar memorial ceremony.
On Wednesday afternoon, President Herzog will deliver a speech at the official ceremony to commemorate the 80th anniversary of the Babyn Yar murders at the Babyn Yar Holocaust Memorial Center in Kyiv, the embassy said.

PRESIDENT OF UKRAINE MEETS WITH PM OF SWEDEN 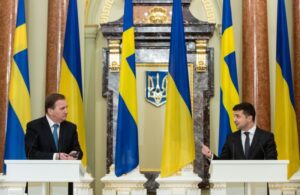 President of Ukraine Volodymyr Zelensky held a meeting with Prime Minister of Sweden Stefan Löfven, at which he thanked him for participating in the inaugural summit of the Crimean Platform and for sustainable support of the sovereignty and territorial integrity of Ukraine. Zelensky received an invitation to visit Sweden.
According to the press service of the head of state, Löfven said that the summit of this initiative is a powerful signal of the need to de-occupy Crimea both from the outside and for the Ukrainian society.
Zelensky expressed his sincere gratitude to the Swedish side for assistance in organizing an exposition of values important for Ukrainian statehood – the original Constitution of the Hetman Pylyp Orlyk of 1710 and the Hetman’s mace, which are now exhibited in Sofia Kyivska.
The Head of State and the Swedish Prime Minister discussed further interaction on the agenda of Ukraine’s relations with the EU and prospects for cooperation within the framework of NATO’s Enhanced Opportunities Partnership.
Security policy issues related to the implementation of the Nord Stream 2 project by Russia have become separate topics for a substantive dialogue.
The parties also discussed the tense situation on the borders of Belarus with neighboring countries due to the growth of the flow of illegal migrants and the Russian exercises “West-2021”, which worsen the security in the region.
The President of Ukraine informed his interlocutor about the situation in Donbas and thanked the Swedish side for the projects implemented by the defense departments, in particular in the field of mine clearance.
In addition, Zelensky, during a discussion of the possibilities of filling bilateral relations with specific projects, invited the Swedish side to take part in the creation of a network of waste processing plants in Ukraine.
The Prime Minister of Sweden noted the progress of Ukraine in the implementation of important reforms. 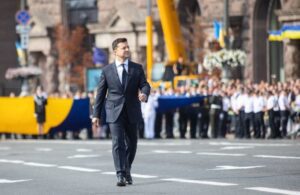 President of Ukraine Volodymyr Zelensky announced the introduction of a new Ukrainian holiday – the Day of Ukrainian Statehood.
“We are starting to celebrate the Day of Ukrainian Statehood. We consider its starting point the year of the establishment of Kyiv – the capital of Kyivan Rus – Ukraine, which is for a reason called the place where everything begins,” Zelensky said during a speech at the parade in honor of the 30th anniversary of Ukraine’s independence.
“We will celebrate the birth of our statehood on the day of our statehood flourishing – on the day of the baptism of Kyivan Rus – Ukraine,” he said, adding that “he signs a corresponding decree today, on August 24.”
The President also said that “Ukraine is starting the process of returning to their native land outstanding Ukrainians who lived for Ukraine, fought for Ukraine and were not buried in Ukraine.”