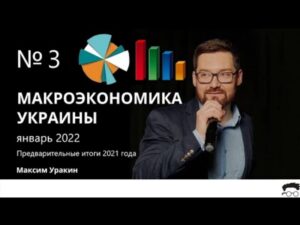 Ukraine’s GDP growth in 2021 will amount to 3.4% instead of 4.1% expected in April, and economic growth in 2022 is projected at 3.6% instead of 3.7%, such a consensus forecast was posted by the Ministry of Economy on its website.
The direct public debt of Ukraine by the end of 2021 will be cut to 56.9% of GDP, and by 2024 to 47%, Finance Minister Serhiy Marchenko said, presenting a strategy for managing public debt until 2030 at a government meeting on Thursday.
The ICU Group has downgraded its forecast for Ukraine’s GDP growth in 2021 to 2.9% from 5.2% in the spring forecast, Head of ICU Macroeconomic Research Vitaliy Vavryschuk has said.
The real gross domestic product (GDP) of Ukraine in the third quarter of 2021 increased by 2.7% compared to the same period in 2020, the State Statistics Service reported such an updated estimate, while earlier it estimated growth in mid-November at 2.4%.
Alfa Bank (Kyiv) expects real GDP growth in Ukraine in 2022 by 3.4% after its projected growth of 3% over 2021 and a slowdown in the average annual inflation in 2022 to 8.6%, which is 0. 8 percentage points below the expected average annual inflation rate in 2021 (9.4%). Oxford Economics has worsened expectations of real GDP growth in Ukraine in 2022 to 2.8% compared to 3.4% in the November forecast, by the end of 2021 it expects the country’s economy to grow by 3.1% of GDP, as follows from materials of the December forecast, which are available to Interfax-Ukraine.
The deficit of Ukraine’s foreign trade in goods in January-October 2021 decreased by 27.7% compared to January-October 2020 – to $2.565 billion from $3.547 billion.
The growth of consumer prices in Ukraine on an annual basis in November 2021 slowed to 10.3% from 10.9% in October and from 11% in September.
The total public debt of Ukraine in November increased by 1.64% in US dollars and amounted to $94.15 billion, as well as by 4.92% in hryvnia – to UAH 2.558 trillion, according to data on the website of the Ministry of Finance, published on Wednesday.
Industrial production in Ukraine in November 2021 increased by 0.4% versus November 2020, which is worse than an increase of 1.4% in October, but better than a decline of 0.7% in September, the State Statistics Service said.
Real wages in Ukraine increased by 8% in November 2021 year-over-year, and compared to October of this year, the growth was 0.9%.
Ukraine in 2021 has a record harvest of grain, legumes and oilseeds of 106 million tonnes: cereals and legumes – 84 million tonnes and oilseeds – 22.6 million tonnes, Minister of Agrarian Policy and Food of Ukraine Roman Leschenko said on Facebook. Ukraine since the beginning of the 2021/2022 marketing year (MY, July-June) and as of December 29 had exported 31.57 million tonnes of grain and leguminous crops, which is 21.1% more than the indicators for the same date of the previous MY.
The volume of construction work performed in Ukraine in November 2021 decreased by 2.7% compared to November 2020.
Publisher of “Open4Business”, PhD in Economics, Maksim Urakin.
Previously Experts Business Club created a video summary dedicated to macroeconomics. Full video watch here

The Experts Club continues a series of programs dedicated to the macroeconomics of Ukraine. The new issue analyzes the preliminary results of 2021.
“We create such analytical videos in order to increase the level of knowledge of the population in the field of economics and for easy visualization of a huge number of figures. Such content, of course, is not a “mass market,” but we do not strive for it either. We focus on a thinking and searching audience,” founder of the Experts Club project Maksim Urakin said.
The issue analyzes the change in the number of the population of Ukraine, the current unemployment rates, presents the labor market in the regional context. In addition, GDP indicators are given, the main trade partners of the country are named, trends and plans for the payment of Ukraine’s internal and external debt, as well as indicators of retail and inflation, are analyzed.
The video contains a large number of author’s charts, histograms, which conveniently illustrate the main macroeconomic trends.
The Experts Club is dedicated to political science, economics, science, futurology, contains expert opinions and analysis of the topics discussed.
This video is available for viewing at the link
https://www.youtube.com/watch?v=gUs6fF–F-c
You can subscribe to the channel at the Experts Club – YouTube link 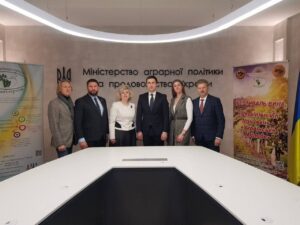 On December 30, 2021, as a result of the annual work of Ukrainian winemakers and relevant associations, the Ministry of Agrarian Policy of Ukraine held the ” Great Tasting of Ukrainian Wines.” 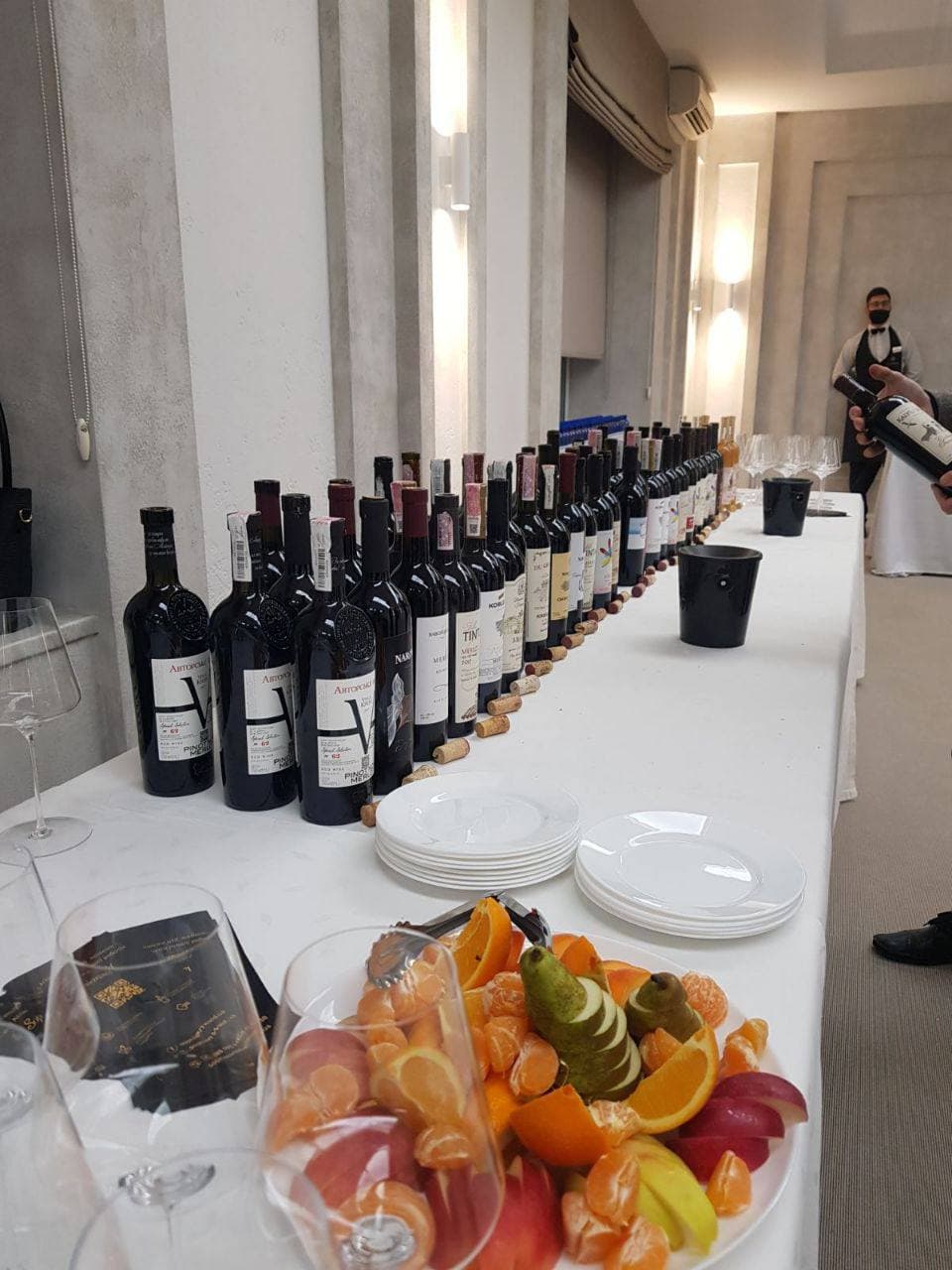 20 producers presented their wines for tasting:
• Prince Trubetskoi Winery
• Oreanda
• Villa Krim
• Koblevo
• Chizay
• Beykush Winery
• Guliev Wines
• Frumushika-Nova
• Driukivski Wines
• Babchuk Winery
• Narovylo
• Gigineishvili Wine House
• Villa Tinta
• Sadyba Sterkh
• Slivino
• Bohdan’s Winery
• Grapes Odesa
• Don Alejandro
• Kalyus Winery
• Stakhovsky Winery
The presented samples (there were more than 50 of them) were from different grape varieties, such as the international group of varieties – Chardonnay, Riesling, Merlot, Cabernet Sauvignon, Pinot Noir, and local grape varieties – Sukholymansky, Chersegi, Saperavi, Odesa Black.
Brut category sparkling wines (white and rosé) were in the aperitif part of the presentation, and then white, rosé, orange and red dry wines from different regions of Ukraine amazed everyone with their quality, namely, from Odesa, Kherson, Mykolaiv, Zakarpattia, Dnipropetrovsk, Kyiv, Khmelnytsky, Vinnytsia.
In his welcoming speech, Minister of Agrarian Policy Roman Leschenko stressed the importance of abolishing the excise tax on dry wines from January 1, 2022, which will promote domestic wines and facilitate the work of winemakers, and thanked everyone for organizing such an important event and congratulated the audience on the coming year 2022!
Let’s go to the New Year with Ukrainian wine!
Interfax-Ukraine News Agency is an information partner of this event and other events of Ukrsadvinprom.

SCIENTIFIC-PRACTICAL SEMINAR OF WINEMAKING. HISTORY AND MODERNITY OF UKRAINIAN WINEMAKING IN KYIV REGION 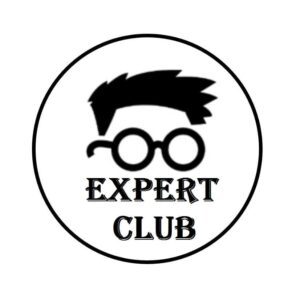 The Kyiv analytical center Experts Club hosted another event to promote Ukrainian wine and the development of the Ukrainian wine industry, as well as to analyze the products of the best domestic wine producers. The event was held with the participation and support of the Ukrsadvinprom association. 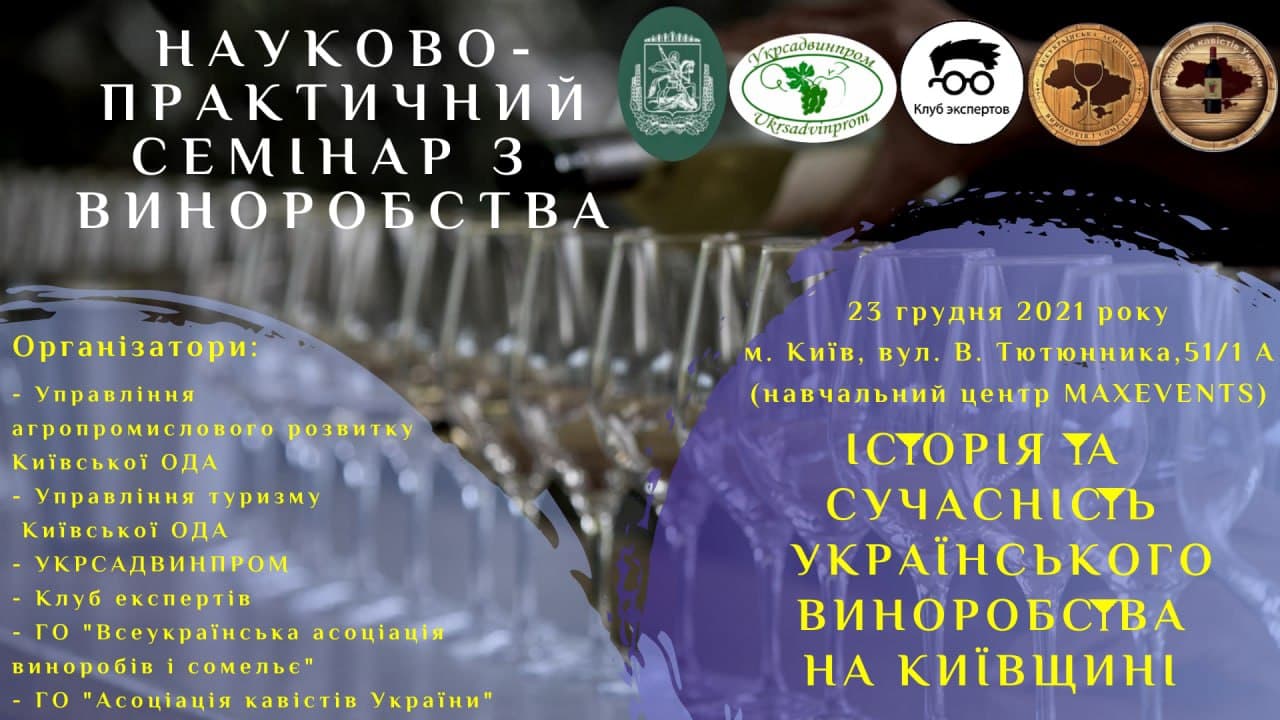 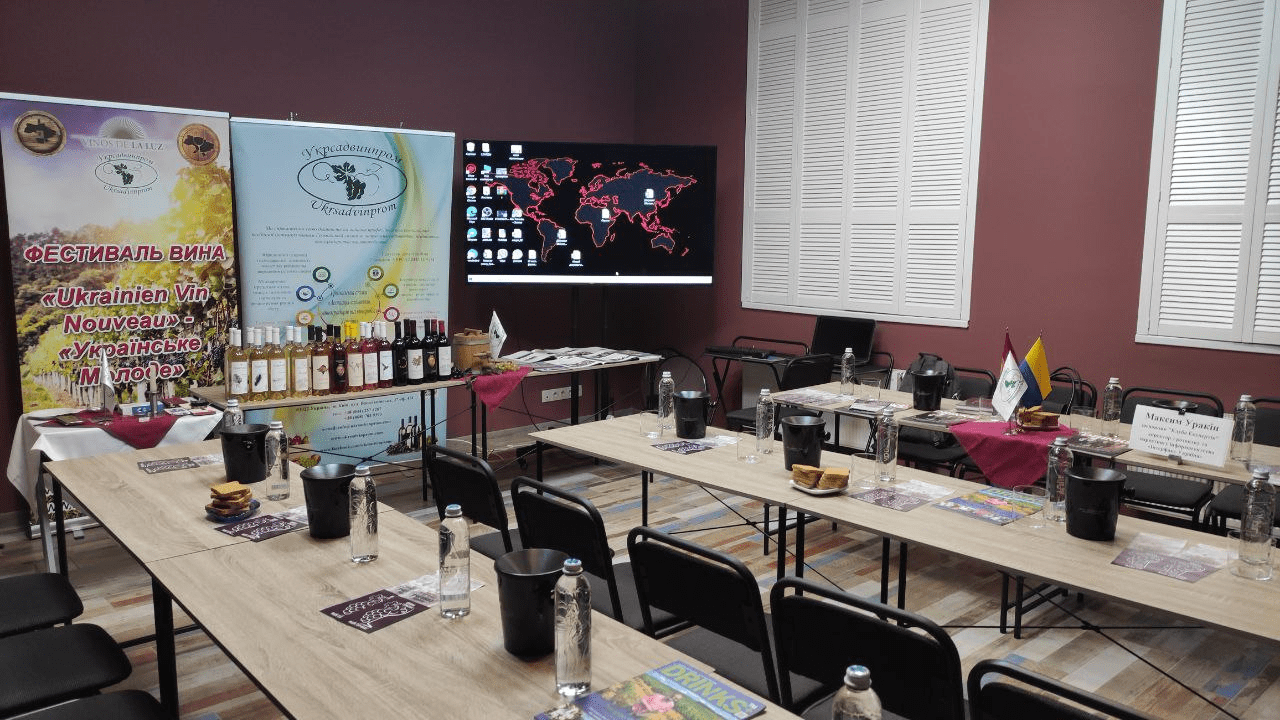 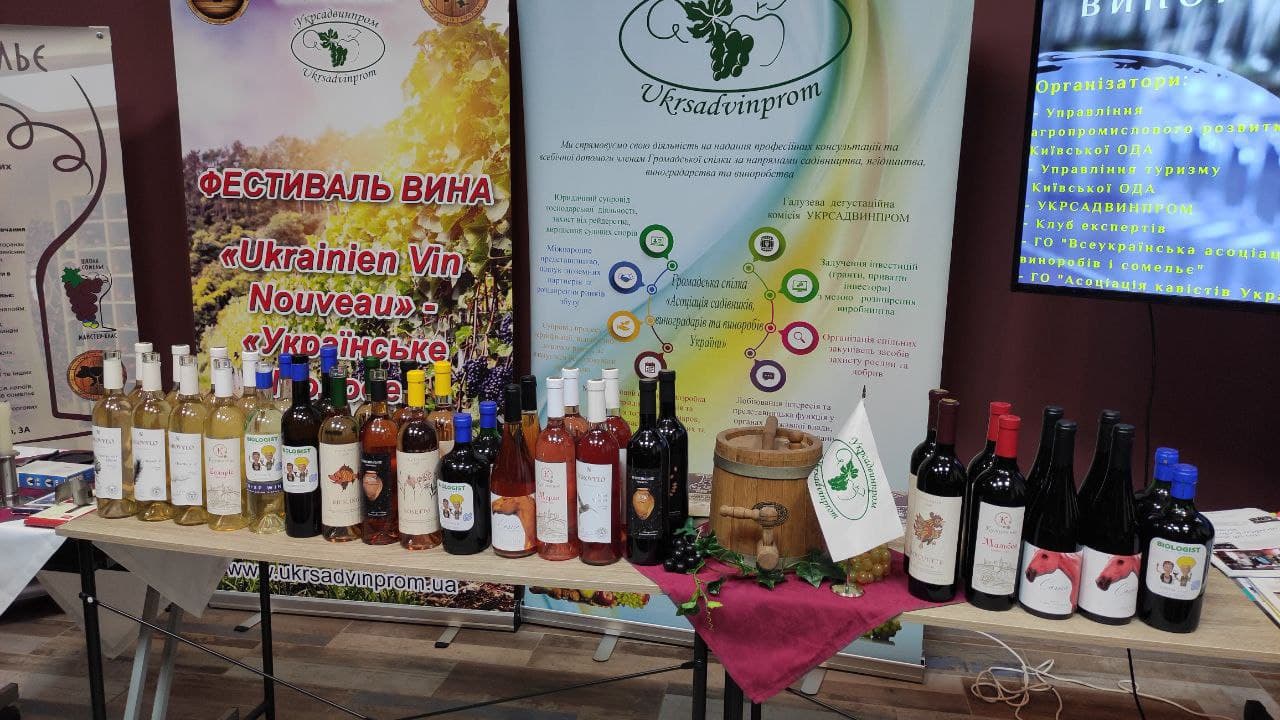 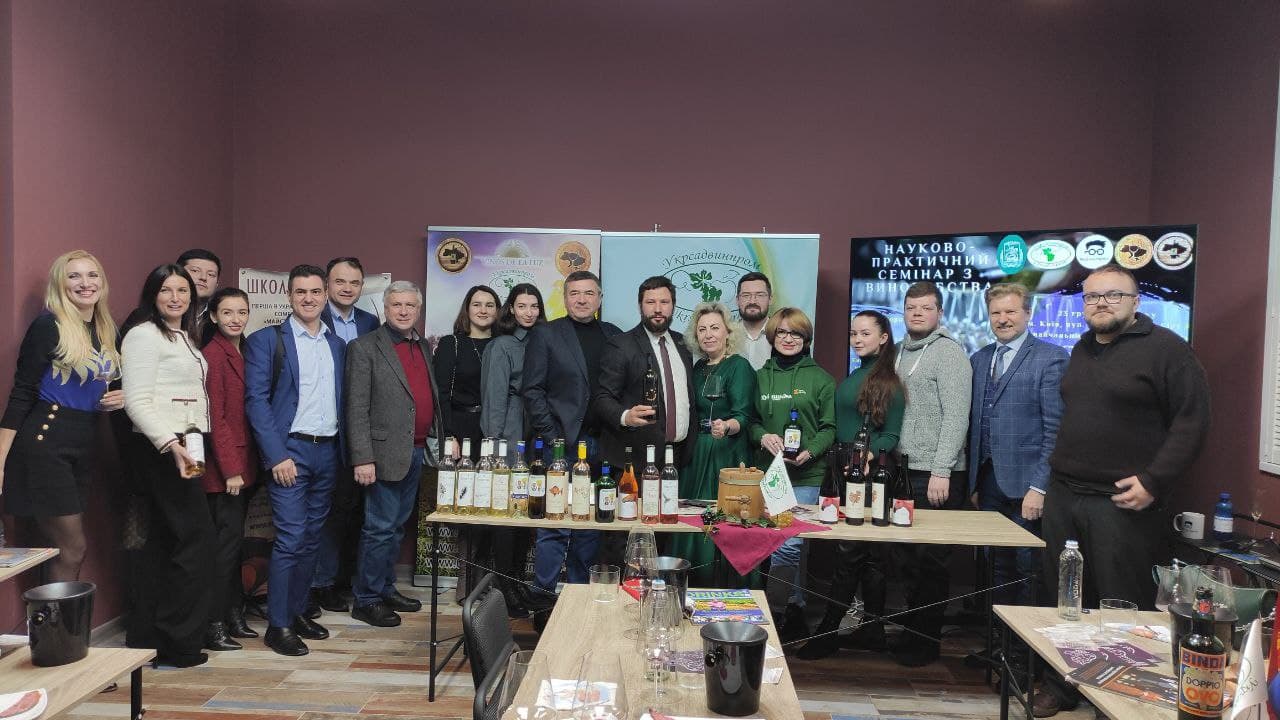 Within the framework of the meeting, an organoleptic analysis of the quality of samples of the leading Ukrainian wine producers was conducted.

Tasting wine from Kyiv region was held in glasses of the Austrian company SOPHIENWALD. 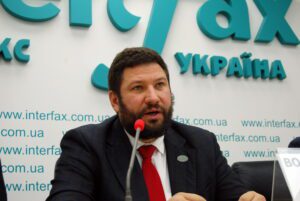 The public organization Association of Gardeners, Grape Growers and Winemakers of Ukraine (Ukrsadvinprom) and the Ministry of Agrarian Policy and Food have begun work on the creation of a viticultural register to record the production and consumption of grapes and wine in Ukraine, which will allow to cancel the licensing of wine and remove it from the list of excisable goods.
This was announced by Head of the public organization Volodymyr Pechko at a press conference at Interfax-Ukraine on Friday.
Ukrsadvinprom and the Ministry of Agrarian Policy begin to work on the creation of a viticultural register, which is necessary for the correct regulation of the market, namely, on the creation of three types of obligatory declarations: how many grapes you produced, how much wine you made from these grapes, and how much wine you have left at the end of the year,” Pechko said. 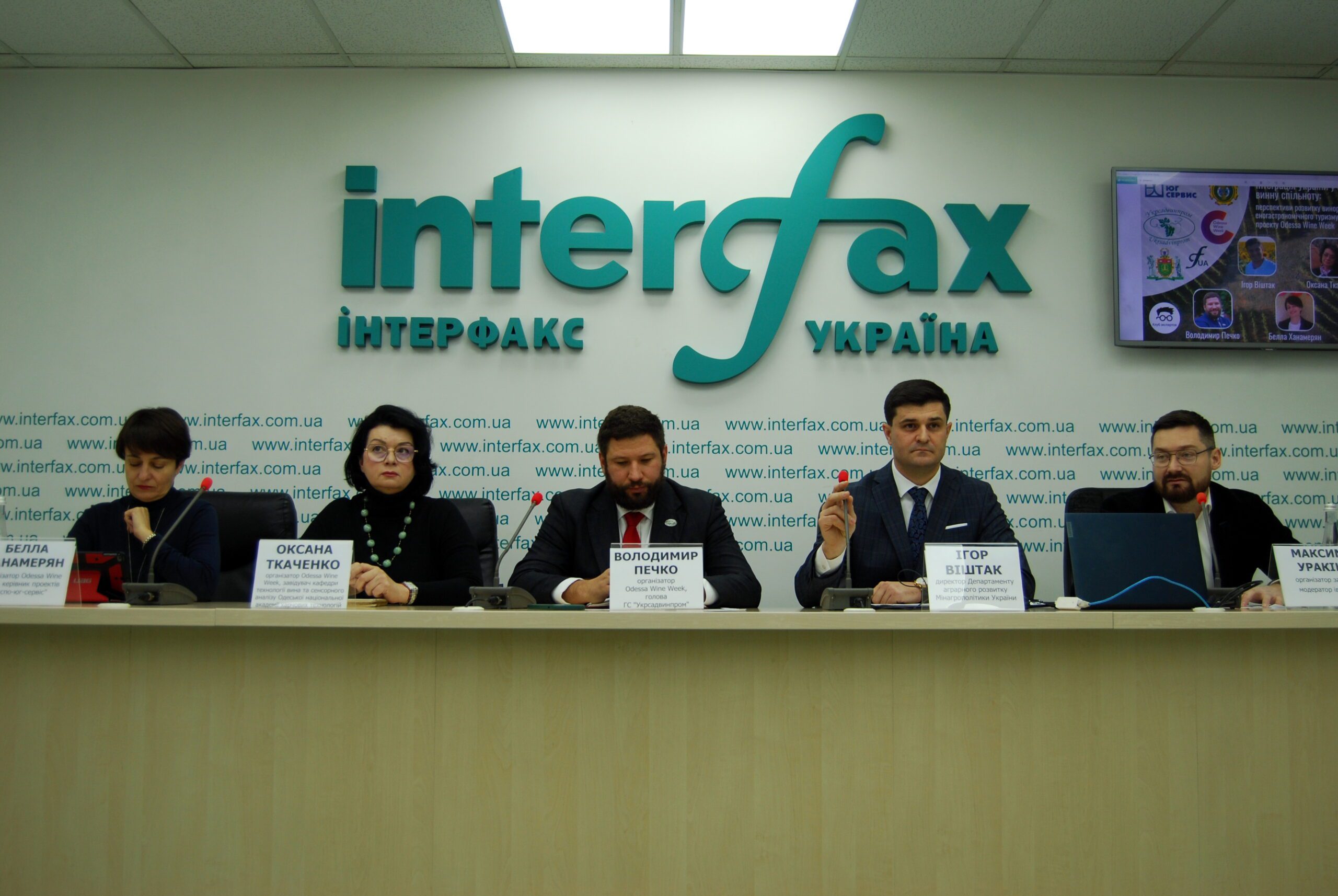 According to him, the state with the help of these three declarations will be able to effectively analyze the production, sales volumes and carryover stocks of grapes and wine in the country, which in the future will allow it to abandon the need to license wine and abolish the excise tax from it.
He added that, according to Ukrainian law, wine is a food product that should not be subject to excise tax.
“I believe that this will lead to an increase in the number of wineries. We are working to ensure that such ‘chateau’ [wineries] are created in Ukraine. These do not have to be giant enterprises,” Pechko said.
In addition, Ukrsadvinprom intends in 2022 to join the OIV (International Organization of Vine and Wine), which controls 85% of the world wine market. 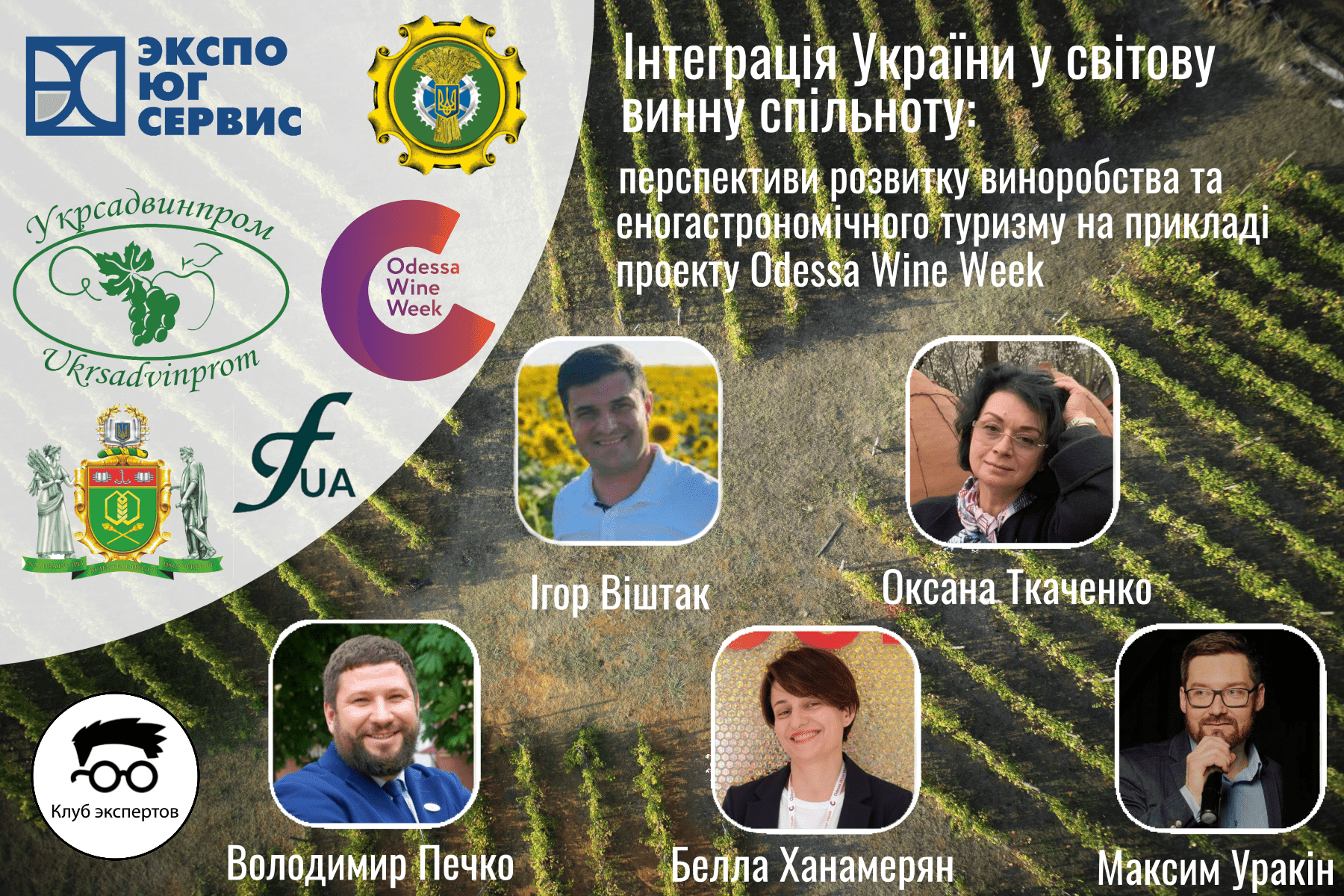 “We are planning to enter the international organization OIV. This is an organization for wine, which includes 47 states. It is 85% of the world wine market, which is created by the leading countries: China, France, Spain, the United States – and which everyone is striving to join. It is engaged in the harmonization of accepted standards for the production of wine products,” Pechko said.
According to him, this initiative is also supported by the Ministry of Agrarian Policy. The head of the organization said that the issue of joining the OIV is only how much time is needed to complete the association procedure. He admitted that it will be possible to do this next year.
Interfax-Ukraine and the Experts Club acted as partners of Odessa Wine Week. 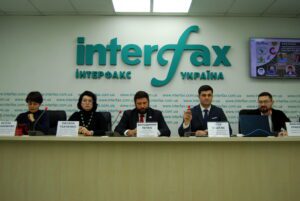 Producers and processors of grapes, as well as representatives of the wine industry will hold the international forum Odessa Wine Week in Odesa on May 25-29, the event will unite the efforts of the Ukrainian wine-making community aimed at developing the Ukrainian wine market, wine and gastronomic tourism, popularizing and promoting the Ukrainian Wine brand and the integration of Ukraine into the world wine community.
This was announced by the organizers of the event – head of the Ukrsadvinprom public organization Volodymyr Pechko, head of the Expo-Yug-Service projects Bella Khanameryan and head of the wine technology and sensory analysis department of the Odesa National Academy of Food Technologies Oksana Tkachenko at a press conference at Interfax- Ukraine.

According to Ukrsadvinprom head Pechko, his association organizes an annual forum, which was first held this year in Odesa, since this site allows to gather the leading experts of the wine industry, scientists, oenologists (experts in evaluating vineyards), winemakers, government officials, national and foreign wine associations, tourism industry, HoReCa and retail, sommeliers, journalists, wine traders and producers of related products and technologies to popularize Ukrainian wines.
“Last year, one could taste 305 samples from 65 wineries in Ukraine. That is, in one place you can taste Ukrainian wines: craft winemakers, medium-sized producers with vineyards of 40-60 hectares, and large producers from all over Ukraine,” Pechko said. 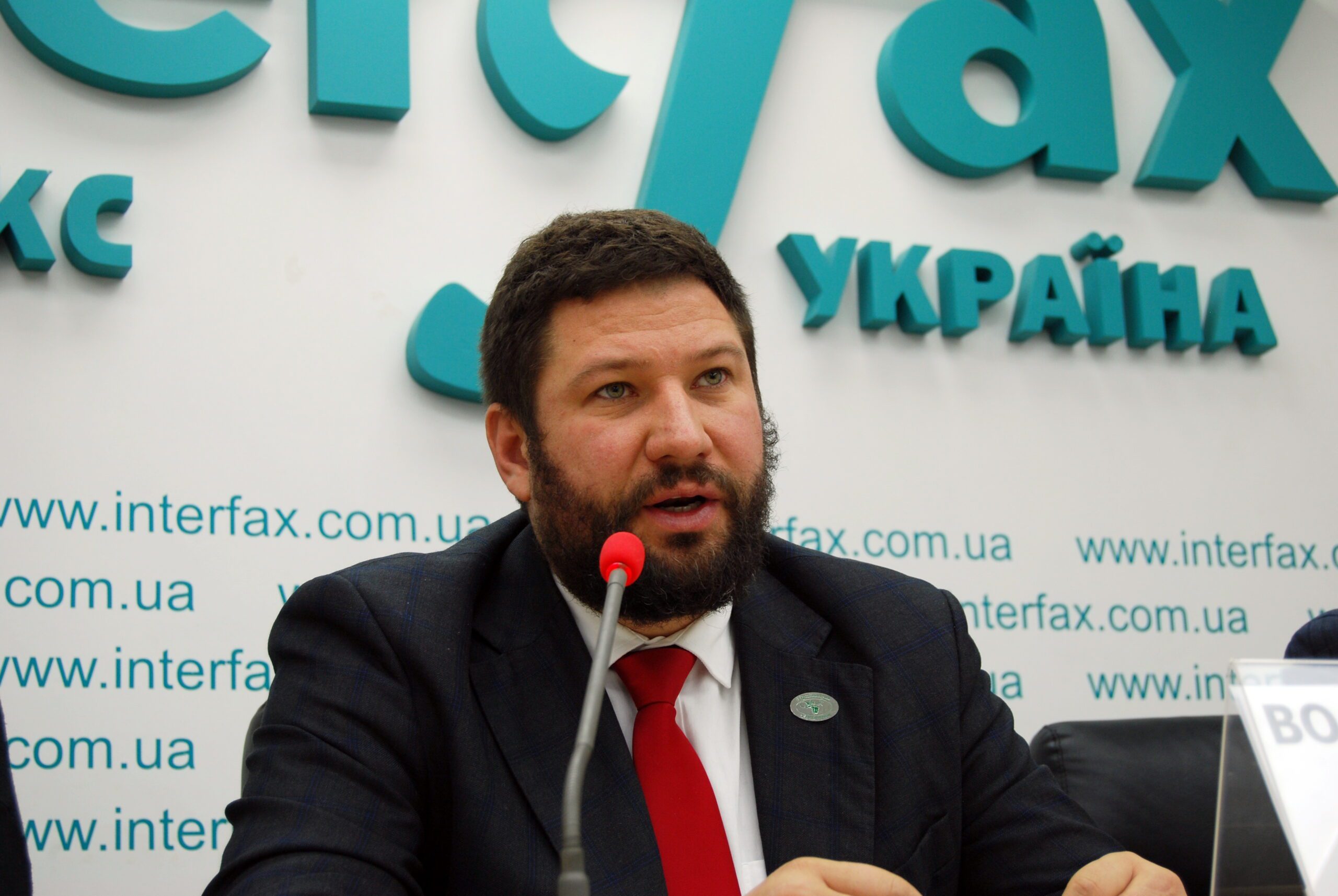 The organizer of the forum, Bella Khanameryan, specified that this year 30 companies have become partners of the event. In addition, 87 speakers and experts from 18 countries spoke at Odessa Wine Week 2021, profile reports and discussions were held on 40 topics, over 3,000 people attended the event.
According to her, in 2022, projects were announced at the forum, including talks about wine and Ukraine’s integration into the world wine community Wine Future Forum, as well as the Odessa Wine & Spirit Awards competition.
“In 2022 we will have a creative competition for the best label. We will have a sailing regatta, a special program “Women in Winemaking,” evening performances, musical and artistic performances, exhibitions, biennials, everything that can be shown in the culture of drinking, pay attention to wine as part of the cultural code of the country,” Khanameryan explained.
According to Oksana Tkachenko, Ukrainian industry representatives see recognition in other countries of the world among their strategic goals.
“We already see interest from our closest neighbors, we are waiting for delegations from such countries such as Uzbekistan, Georgia, Armenia, who will not only come to show themselves, but we are preparing educational projects for them, within which they will visit wineries and participate in educational project in B2B and B2C formats,” she said.
Ihor Vishtak, the director of the agrarian development department of the Ministry of Agrarian Policy and Food of Ukraine, who participated in the press conference, said that his department has already allocated UAH 450 million of compensation to support horticulture, viticulture and hop-growing in 2021, of which UAH 200 million for planting material, the construction of trellises for growing climbing plants and drip irrigation (of which – UAH 9 million for viticulture), and UAH 250 million – for the construction and reconstruction of facilities for these crops (including UAH 19 million – for the construction of facilities and the purchase of wine-making lines).
Interfax-Ukraine and the Experts Club acted as partners of Odessa Wine Week.